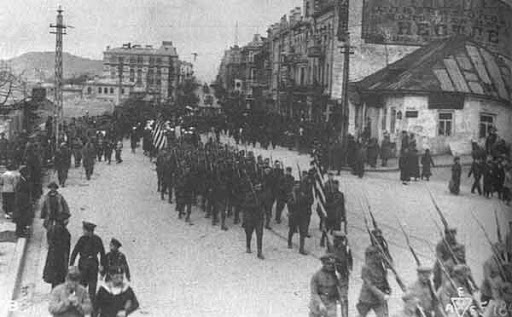 The signing of the armistice in Brest-Litovsk between the Russian Bolsheviks and the Central Powers forced the Allies to intervene militarily in Bolshevik Russia. Although they knew little about the Bolsheviks, the Allies feared that Germany would have access to Russia’s raw resources. With the defeat of Germany, more and more voices called for the Allied intervention in Russia to turn into a full scale military action against the Russian Bolsheviks. Tired of the war and drained of manpower, most Allied leaders opted for a policy of isolating Bolshevism. In addition, they had differing interests and opinions concerning Russia.

The Allies began their military intervention in Russia in the spring of 1918. British troops landed in the ports of Archangelsk and Murmansk, and the Japanese occupied Vladivostok. US troops were sent to Siberia to rescue a Czech regiment, with classified orders to watch over Japanese troop movements. The British also urged the Canadians to send troops to Siberia to counterbalance US and Japanese military presence there. In the south, another British army entered the Caucasus mountains, heading for the oil fields in the region. Lacking manpower, the French military sent token expeditions.

Lloyd George: “We can spread Bolshevism in an attempt to remove it”

When the war ended, the United Kingdom decided to not only maintain its troops in Russia, but to also provide support to the Whites. Following its defeat, Germany began withdrawing its troops from Ukraine and the Baltic states and the Allies sought to fill the power gap. At the end of 1918, there were over 180.000 foreign soldiers on Russian soil and several White armies received funding and munitions from the Allied Powers. In the West, there were talks about an intervention against Bolshevism, but this was not going to happen. Public opinion was tired of war.

Even Lloyd George told members of the British Cabinet that if they did not take care in how they act, they would simply spread Bolshevism in an attempt to remove it. British military authorities reported that soldiers were oposed to the idea of being sent to Russia. The Canadians, who had sent troops for the expedition in Siberia and Murmansk, wanted to withdraw until the beginning of the summer, deeply troubling the authorities in London.

The French, staunch supporters of the intervention, had neither the resources nor the manpower. According to an agreement signed between the French and the British, France was responsible for southern Ukraine and Crimea, and England for the Caucasus and Central Asia. French general Louis Franchet d’Esperey complained to the Paris government at the end of 1918: “I do not have enough troops to gain a foothold in Russia, all the more as our men do not feel comfortable with facing the Russian winter, while the rest of their comrades are resting at home”. The French general’s warning was ignored by the Paris government, ordering the deployment of a mixed regiment, consisting of French, Greeks and Poles, in the Black Sea port of Odessa. Shortly after arriving, this detachment was attacked by a group of enemies, consisting of Bolsheviks, nationalists, anarchists, and Ukrainians.

During the winter of 1918-1919, the French in the detachment became easy targets for the Bolsheviks who used French-speaking propagandists to demoralize them. A French officer stationed in Crimea would note: “No French soldier that had survived Verdun and Marne will accept giving his life in Russia”.

In April 1919, the French authorities suddenly decided to withdraw the contingent from Odessa. Under the impact of Bolshevik ideas, two weeks later, the French Black Sea fleet was rebelling. Although France continued to vehemently oppose the Bolsheviks, it no longer participated in any Allied military intervention, opting to isolate the Bolsheviks.

During the Paris Peace Conference, but also in the years that followed, France did everything in its power to strengthen the states neighbouring Russia, notably Poland, Romania, Czechoslovakia, Yugoslavia, to form what they considered to be a “cordon sanitaire” against Bolshevism. This “cordon sanitaire” also had a role in counterbalancing the power of Germany and to build a barrier in the unlikely event of an alliance between Germany and Russia.

The Allied intervention in Russia was constantly marked by contradictory objectives and mutual suspicions. Officially, the US opposed the intervention, but to check Japanese influence, maintained its troops in Siberia after the war was over. The British were worried about a possible involvement by Moscow in its colonies, especially India. France would have preferred the Whites taking over Russia, but the United Kingdom would have settled with a weakened Bolshevik regime. The result of these contradictory policies and conflicts also contributed to the victory of the Bolsheviks in the Russian civil war.