The Battle of Mărășești in the British press. “The fearless Romanians stood without kneeling under the fire of the enemy’s artillery” 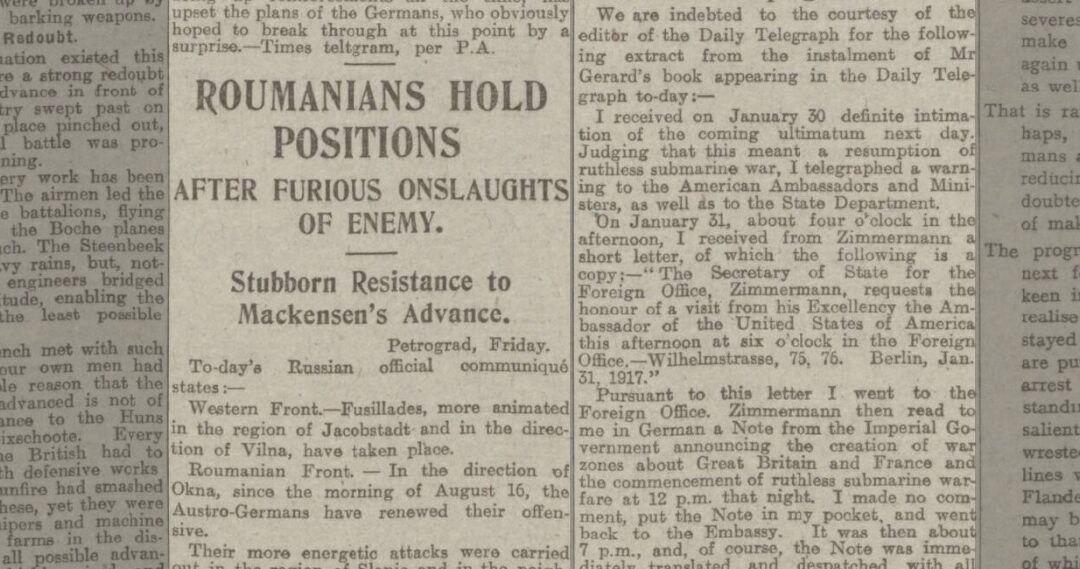 The Battle of Mărășești took place in three stages, from July 24/ August 6 to August 21/ September 3, 1917, on a front of about 35 km in length, and was the most important military confrontation on the Romanian Front in the summer of 1917. The forces involved in the battle were significant: on the one hand, the Russian Fourth Army- made up of 84 battalions, 32 squadrons, 79 batteries, and the First Romanian Army- made up of six divisions, one cavalry division, three brigades, one heavy artillery group, the Second Air Force Group, and on the side of the Central Powers, the Ninth German Army (led by General Johannes von Eben)- consisting of 174 battalions, 16 squadrons, 150 batteries, three squadrons, a cycling company and others.

“The Battle of Mărășești has shown that the Romanian troops, equipped with what is necessary for a modern war, are excellent. The defence of Mărășești consecrated its place in history, alongside the defenders from Isere and Verdun.

Mackensen sent all available troops to Mărăşeşti, supported by powerful artillery, and decided to break through the front at any price, without taking losses into account.

The Romanians were forced to fight on flat ground without any cover except the trenches. They had no fortifications, no mountains or forests to help them, as was the case last autumn in the Carpathian Mountains, and the fearless Romanians stood without kneeling under the fire of the enemy’s artillery and every German attack was followed by an even stronger one by Russian-Romanian troops”.

“A Russian regiment asked to be allowed to save its reputation

The enemy attacks on the Siret and Suceava rivers have been repulsed. The enemy managed to push our troops a little further south to Ocna. In the course of the 10th of August, there were fierce battles.

The enemy underwent a series of vigorous attacks and in the evening, it forced the Romanians to withdraw 5 versts [about 2 kilometres]. The enemy offensive continued west of the Focsani-Mărăşeşti railway line. To the east, we were able to repulse all attacks and take 300 prisoners. The battle is still in progress. […]

A Russian regiment which had abandoned its position and was disarmed demanded that it be allowed to salvage its reputation and attacked the enemy in a fiery manner, putting him on the run and captured 100 prisoners and 4 machine guns in the process”.

Mackensen’s attack north of Focșani in Romania becomes a much more serious operation than it seems. Although, in a Berlin report last Tuesday, this operation was described as a local attack, the Russian-Romanian front is now stretching on a considerable distance, and it is said that 3.500 prisoners were taken in just three days.

Because of the extraordinary strategic importance (as The Times reports), the commander of the Russian-Romanian troops ordered a series of counterattacks after the first incursion against his position, but it seems they were unsuccessful. The railroad for which this offensive is taking place is a vital hub for the entire region of Moldavia.

The main line north of Focșani lies at the edge of the mountains and connects to the valleys of Bistrita and Trotuş, serving the Romanian mountain front. The main line to the east goes to Galați and on the Danube, towards Iași.

These two lines are joined by a knot, from Tecuci to Mărăşeşti. If Mackensen’s advance continues, these connections will be in immediate danger, which will threaten the army’s rear-guard that has advanced victoriously towards Putna”.