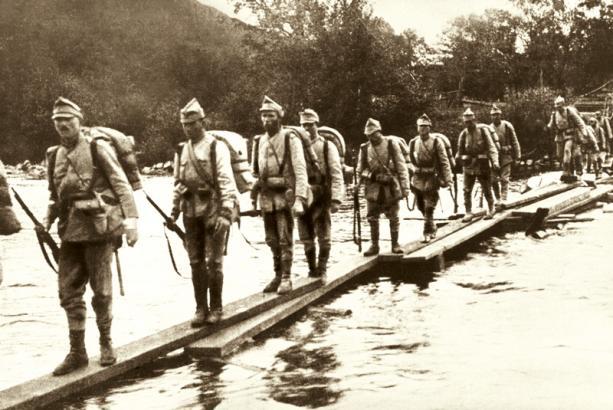 Both the documents of the time, as well as the works that appeared after the First World War, give a broad description of the military actions carried out in the area of Vârciorova- Orşova (Mehedinţi County) and highlight how the Romanian soldier fully understood his mission, in this sense the people of Mehedinți proving themselves to be fearless fighters.

In 1916, before Romania entered the First World War on the side of the Allies, General Ion Drăgălina was appointed commander of the 1st Infantry Division, located in Turnu Severin. The troops of the division had to defend a large part the western border of Romania. The division fought bravely, in August 1916, in Orşova and along the Cerna River valley.

Following the attack on the Iron Gates in the morning of August 15, 1916, the Romanian troops under General Drăgălina’s command managed to occupy the mountain peaks of Alion, Ozoina and Dranic on August 19, before the city of Orşova was finally liberated. The 1st Infantry Division managed to hold its ground and until the beginning of October the German-Austro-Hungarian army was halted.

“The troop goes forward with great ardour and the fighting starts off fiercely. Our men crash into the barbed wire fence and the tempestuous fire of enemy machine guns. Defying death in their mad dash, they no longer shy away and start pulling the poles with their hands, hitting the wire with the rifle stock to break it, to open the way, as their heroic soul demands. One row of fences is removed with the cost of many lives, but the soldiers won’t let up and they ran to the other obstacle, the second wire fence: here the fighting was more intense, as the enemy knew that if they also pass over these wires, they would have to run or die and they fired with desperation, crazy with fear, and our men fall and the ranks crumble. For a moment, doubt seemed to make its way into their ranks; the murderous fire consumes them. Then Major Hergot gets up, sets off with the battalion’s reserve to their aid, shouting «onwards boys». In a moment, all of them, the whole battalion stands up as one, they ignore the fences, the bullets, and as if they’re bewitched they pass over the second row of wires, rushing shouting hooray and the enemy runs out of trenches leaving everything behind. The battalion takes possession of the hill and of the position, taking a lot of prisoners and material.”