The birth of Czechoslovakia and the chaos of Austro-Hungarian empire 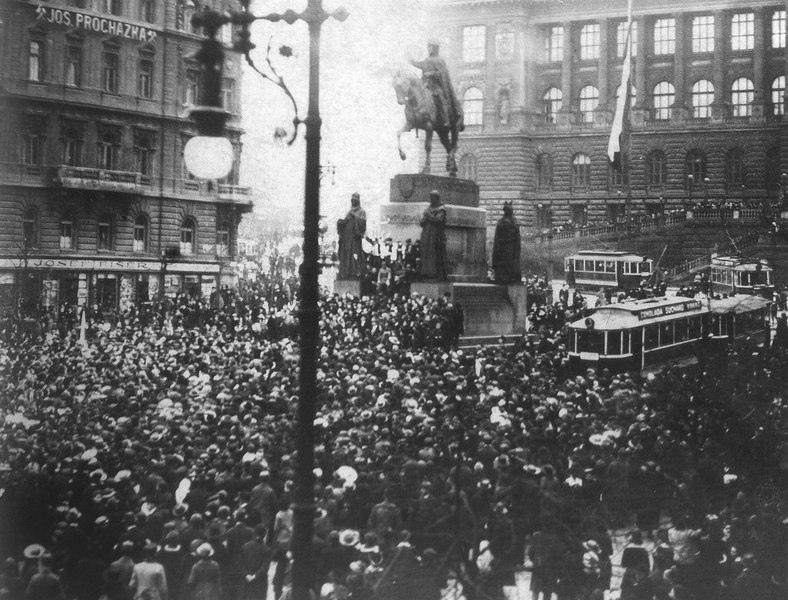 In Europe, the 20th century began with the apocalyptic finale of the age of the continent’s last authoritarian empires. By the time the smoke of the First World War had cleared, the Russian czars, the German kaisers, and the Austrian emperors had been swept into the proverbial dust bin of history. In Central Europe, the Austro-Hungarian Empire was dismantled and dismembered after its surrender, and was broken up into a new collection of fledgling nation states, one of the which was the First Republic of Czechoslovakia.

At the onset of the war, the Empire had encompassed not only the Dual Monarchy of Austria and Hungary, but also contained within its borders the Czech Crown Lands of Bohemia and Moravia, Slovakia, large swaths of what are now Poland, the Ukraine and Romania, as well as the Balkan regions of Slovenia, Croatia, and Bosnia-Herzegovina. Though supreme leadership rested with Hapsburg Emperor Franz Josef of Austria, the powerful Magyars of Hungary enjoyed a large degree of autonomy and self-rule within the Empire which they had won during the 1860 s. Not so for the other smaller ethnic groups which comprised this inharmonious conglomeration. The Czechs, Slovaks, Poles, Croats and all the others came more or less under the domination of either the Austrian Germans or the Hungarian Magyars.

The Great War that ended empires

In fact, it was ethnic tensions within the Empire that indirectly lead to the outbreak of the First World War, which came about as the undesired product of a sticky web of interlocking mutual defense treaties between the countries of Europe which all set troop mobilizations in motion after one catalytic incident. Hapsburg heir Duke Franz Ferdinand was assassinated by Serb nationalists in Sarajevo in 1914. Consequently, the Dual Monarchy declared war on Serbia. Russia at that time was allied with Serbia, and so was obligated to go to war against Austria-Hungary. At that point, Germany, as the Dual Monarchy’s ally, was obligated to declare war on Russia, whose ally France was then obligated to fight against both Germany and Austria-Hungary. Before it all ended several years later, Great Britain, the United States and the Ottoman Empire were involved as well.

Since the middle of the 19th century, the Czechs, who were like the Magyars one of the largest ethnic groups within the Empire, had been struggling to attain self-rule of their own within the historic boundaries of the Czech Crown Lands. There had been a huge Czech nationalist movement already rising for decades by the outbreak of the war. Many of these Czech nationalists were also ardent believers in pan-Slavism and felt that all the Slavic peoples (Slovaks, Poles, Bulgarians, Balkans, etc.) should be affiliated together in one vast federation under the aegis of Russia, the largest Slavic power of the time. And even the Czech nationalists who wanted to strive for an independent republic of their own, still looked with sympathy upon other Slav peoples as victims of centuries of repression by German and Magyar powers.

Consequently, when Czech units were called up for military service and sent to the various fronts, none of them had much interest in fighting against Russians and Serbs on behalf of the Dual Monarchy. And anyway, all bets were on the ultimate defeat of Austria-Hungary, so common Czech soldiers also found it hard to be in favor of getting ground up into hamburger for what was already perceived as a lost cause. Desertions were commonplace and there were many instances of entire Czech regiments surrendering en mass but, as these troops proved later on, this was not on account of an unwillingness to fight. It was more a matter of them wishing to do whatever necessary to make sure that Austria-Hungary failed in its war effort. As the war progressed, many of these Czech prisoners of war changed sides and were incorporated into foreign legions in France, Russia, and on other fronts, and then fought against their Austro-Hungarian masters.

Meanwhile, by 1915 the various Czech political parties had recovered from the shock of the first year of conflict and went into action. Many Czech political leaders went into exile in order to work from abroad for their goal of destroying Austria, hoping to be able to forge a new and independent order for themselves out of the wreckage of the Empire. The most significant of these was Thomáš Masaryk, an historian and professor of philosophy who founded the Czech Realist party and who was destined to later become the first president of Czechoslovakia. Masaryk, the son of a Slovak coachman and Moravian maid, felt that the Czechs and Slovaks, linguistically and culturally related, had a better chance of forging an independent nation at the conclusion of the war if they banded together into a single movement.

Masaryk recognized that in order for this movement to be successful it would need the help and support of the Entente powers fighting against Austria, and that three conditions would have to be created in order to gain this support. First, a unified and cohesive Czechoslovak National Council would need to come together and gain worldwide public notice as the legitimate representatives of the interests of the Czech and Slovak peoples. Second, it would be necessary to create a Czechoslovak military organization which would be perceived by the Entente governments as an independent unit which contributed significantly to allied military action. And third, ultimately the Czechoslovak National Council would need to be formally recognized by the Entente powers as the official government-in-exile of the as-of-yet non-existent Czechoslovak nation.

Masaryk arrived in Paris in the spring of 1915 where he was joined by fellow Czech nationalist lawyer and professor Edvard Beneš, and by Slovak leader Milan Štefánik, who began the process of organizing what would become the Czechoslovak National Council. Throughout the process they maintained close covert communications with Prague via a group of Czech political leaders known as the Maffia. Masaryk used his friends and contacts in France and Great Britain to gain publicity for the Czechoslovak cause and to gain introductions to the Entente leadership. At the time there were large groups of Czechs and Slovaks settled in France, Russia, and the United States, and Masaryk also traveled among them gaining support, both political and financial, for the proposed new independent state. These activities firmly established the Czechoslovak National Council in the representative light that it was striving to achieve.

As for demonstrating an independent Czechoslovak military initiative, already in France at the onset of the war hundreds of Czechs and Slovaks living in France and Great Britain had enlisted in the French Foreign Legion in order to volunteer to fight against Austria-Hungary. Many of these were organized into a special unit known as Nazdar company which was sent to the front lines at Rheims. Czech and Slovak units were also organized in the Balkans. Meanwhile, in Russia, volunteers from the Czech regiments that had surrendered at the opening of hostilities were allowed to form the Czech Legion which first participated in the Galician campaign of 1914 alongside the Russian 3rd Army. Later, in the chaos following the first wave of the Russian Revolution in March 1917, the Czech Legion was allowed to increase its size to four regiments in order to make up for the weakness of the exhausted Russian army and then distinguished itself at the battle of Zborov in Galicia in July. Masaryk came to Russia and in October gained permission to finally form an independent Czechoslovak army, which soon attained a size of 10 regiments, and began making arrangements to have the army transported to the western front. Unfortunately, the Bolshevik revolution and the subsequent civil war with the White Russians frustrated almost all of these attempts at troop transport. But the fact still remained that an independent body of Czechoslovak soldiers existed, and the French government’s agreement to transfer 30,000 of them to the French front represented a sort of de facto recognition of the Czechoslovak nation.

By the summer of 1918, the war was going so badly for the Central Powers that Austria-Hungary was no longer able to sustain its effort. Franz Ferdinand had passed away some time before, and his successor Charles was desperately seeking peace with the Entente. The Czechoslovak National Council saw that all its efforts would come to very little if the Entente agreed to a peace that left the Austro-Hungarian Empire intact. The National Council announced to the Entente governments that the Council had constituted itself as a Provisional Government, currently seated in Paris. The following day came formal recognition from France, followed very shortly thereafter by recognition from the other allied powers. Masaryk, in Washington at the time, released the Czechosolvak Declaration of Independence on 18 October. On the same day, US President Woodrow Wilson, in his reply to the surrender of the Dual Monarchy, specifically recognized that the new Provisional Government had the right to negotiate its own terms with Austria-Hungary. The Dual Monarchy capitulated to Wilson’s terms, and on 28 October, 1918, the Central Committee in Prague issued a formal declaration of the fact of independence. The declaration was five articles long, and it began with, “The independent Czechoslovak state has come into being…”