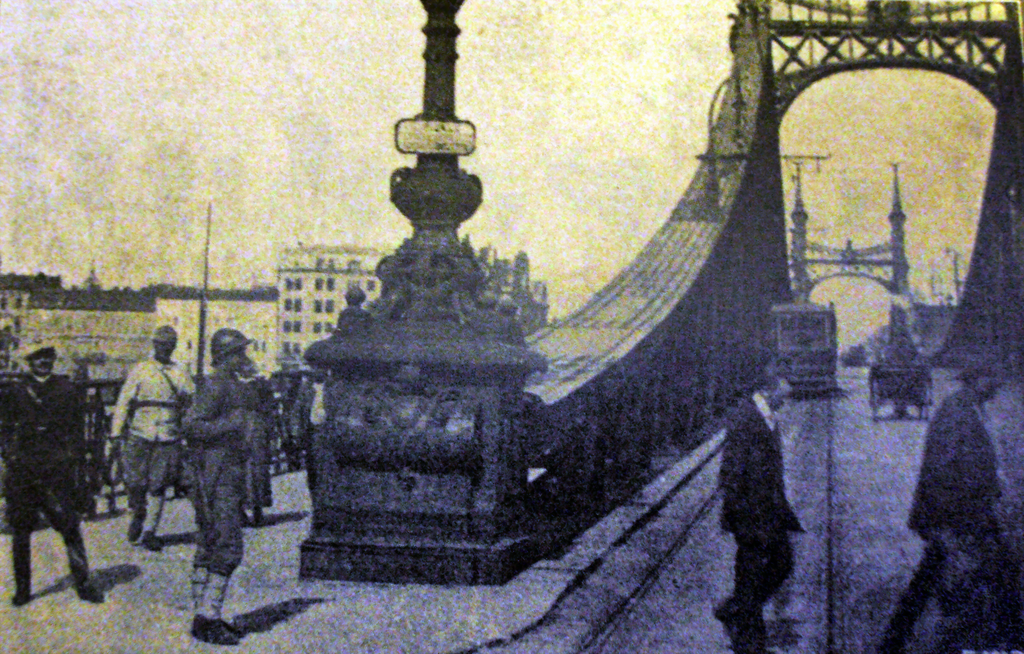 The book of Romanian historian Florin Constantiniu, “A sincere history of the Romanian people”, produced, ever since its first edition, a wide-reaching impact in Romanian society. The “sincere and honest” approach of history was sorely lacking from Romanian historiography. Regarding the campaign of the Romanian army in Hungary, Florin Constantiniu points out that Romanian authorities were forced into action by Béla Kun’s strategy. The Hungarian Bolshevik leader had hoped that Romania could be eliminated “by the combined Soviet-Hungarian attack and kept uninterrupted telegraphic contact with Lenin”.

Encouraged by the victories against Czechoslovakia, Béla Kun decided in the spring of 1919 to go on the offensive against the Romanian forces positioned along the Tisa, presenting this action as one “accomplishing the request made by the Supreme Inter-Allied Council to the Romanian government to withdraw its troops from the Tisa on the Crişana demarcation line”.

In Paris, the attitude of the Allies towards Romania was ambiguous. On the one hand, US President Woodrow Wilson and British Prime Minister Lloyd George was blaming the fall of the Károly government- for them a moderate- to the offensive of the Romanian troops and reproached Brătianu for the advance of the Romanian army to the Tisa river; on the other hand, seeing the Hungarian successes against the Czechoslovaks, Marshal Foch insisted on a military campaign against Hungary, for which only Romania didn’t show any reservation and didn’t present any demands. Florin Constantiniu said that: “Bucharest’s attitude was determined by two reasons: the ongoing Hungarian threat and the desire to improve relations with the Allies- dissatisfied with the firmness of Brătianu in the refusal to accept clauses touching the sovereignty of the country”.

Regarding the way in which Hungarian historiography presents the Hungarian Soviet Republic as a “socialist alternative”- in opposition to the “bourgeois” solution- to resolve the national problem, Florin Constantiniu makes the following remarks: “Referring to the Republic of Councils which was proclaimed on March 21, 1919, Histoire de la Transylvania (1992) writes that « after Russia, a second proletarian state was established, which made the nations of the Danube basin envisage a turning point in history». The authors argue that the «Republic of Councils» established a new orientation in both the foreign and in the nationalities policies. It was no longer based on territorial integrity- it was clearly dissociated from the national politics of Károly’s democratic regime- but it also refused to relinquish certain regions of the country unconditionally, to the armies of neighbouring countries which had obvious imperialist intentions». The terminology of Hungarian authors, inherited from Marxist historiography is inescapable! They recalled that the Republic of Councils «also promised to fight against Romanian boyars», inviting the Romanian proletarians to make an alliance, and that the leaders of Budapest «were firmly convinced that the revolutionary labour movement would abolish borders and create a united international state, whose foundation was the brotherhood of the workers, in the form of a federal republic».

It is indisputable that in Budapest there were socialists and communists with «internationalist» views, that the latter were expecting the outbreak of the world revolution, the collapse of the bourgeois states and the emergence of a universal brotherhood of the proletarians. But nationalism was much stronger than left-wing ideologies. The Chief of the French Military Mission in Prague, General Pellé, wrote on July 6, 1919, that «the Hungarians are determined to restore the old boundaries of their country»: therefore, not the abolition of the frontiers, but their restoration”.

The Supreme Inter-Allied Council, divided and indecisive, chose not to act on the proposal of Marshal Foch when Budapest took the initiative and began its offensive on the Tisa front on July 20. Even if it was expected, the attack sent the Romanian defenders reeling: the Hungarian troops crossed the Tisa and managed to create a bridgehead. Following a week of fierce battles, the Hungarian offensive was stopped and the enemy was pushed back. This time, ignoring the demands of the Supreme Inter-Allied Council that called for a stop to the Romanian advance, Brătianu and the Romanian High Command was determined to end, once and for all, the Romanian-Hungarian hostilities. The decision was motivated by its need for security, but also prestige.

Béla Kun did not abandon the hope that Romania would be neutralized by a joint Russo-Hungarian attack and kept an uninterrupted telegraphic contact with Lenin for that purpose. The threat of a war on two fronts existed as long as Budapest and Moscow formed an alliance. Therefore, the removal of Béla Kun’s government was a necessity.

The Romanian intervention against the Hungarian Bolshevik regime was demanded even by the representatives of the former political class which was removed from power by Béla Kun. As early as July 10, former Prime Minister Gyula Andrássy, Prince of Windischgrätz and former Minister Vázsonyi Vilmos, asked N. Petrescu-Comnen (then the head of the Romanian Press Office in Berna) to help them so that Romania would intervene and work together with the rest of the anti-communist forces in Hungary (a conservative government was already formed in Szeged), in order to overthrow the communist regime by occupying Budapest. According to Vázsony, “the only power able to wipe out Bolshevism in the centre of Europe is Romania”. He continued: “It is only with your assistance that we can save our country and restore peace and order to the heart of Europe”.

Florin Constantiniu emphasised that: “The liquidation of the Hungarian communist outbreak- a sort of branch office by Moscow in the Middle-Danube- corresponded both to Romania’s interests and to the stability of Europe”.