The capital of occupied Romania, seen through the eyes of a German soldier. The journal of Gerhard Velburg 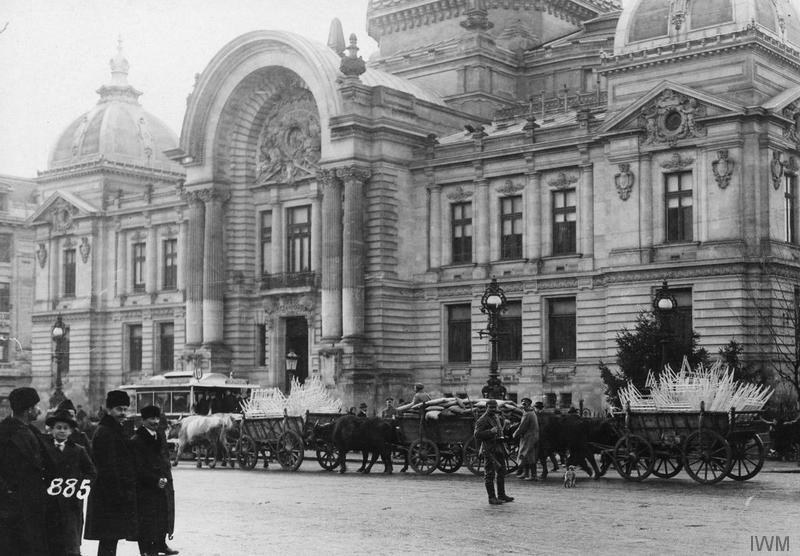 In 1930, the journal of Gerhard Velburg, a former German soldier who fought in the First World War, was published. According to the information provided by Velburg, he had a doctorate in international law, and was employed in the war administration of the city of Jena, where he lived. He was mobilized as a reservist and sent to the Eastern Front, more precisely in Romania, and in 1930, when his journal was published, he apparently was about 30 years old.

Gerhard Velburg is most likely a pseudonym used by Bogislav Tilka, a German author of several international law books and of a two-volume monography about the German occupation of Romania during the First World War. It is hard to believe that the journal published in 1930 is the same as the one written between 1917-1918, when the author was in occupied Romania. Besides, Velburg suggests at some point during the volume that there were indeed some notes, based on which the journal was written.

Velburg was not a soldier by trade and did not participate in the battles of the Romanian Front. He was sent to Romania a few days after the end of the Battle for Bucharest in December 1916. When he arrived in Bucharest, he discovered a world which was surprisingly wealthy, before being sent to a forgotten village in a seemingly endless plain, on the bank of the Danube’s Borcea arm. Subsequently, Velburg returned to the occupied capital of Romania, but it was a short stay as he was forcibly sent to the Western Front.

On December 19, 1916, the German soldier arrived in his first large Romanian city, Craiova. It was a stupefying experience, a feeling that he was not able not shake off during the first few months in which he lived in the “country of the enemy”. The Romanian town of about 50.000 inhabitants was at that time a mixture of blinding luxury and abject poverty: “The contrast between well-dressed men and women, and those in rags is as great as between the palaces of the grain merchants and the pitiful shacks of the proletarians”.

“We forgot the purpose that brought us to this country”

In Craiova, Velburg also encountered a reality that had been forgotten in Germany since the beginning of the war. In occupied Romania, the German soldiers enjoyed an abundance that was lacking in their home country, plenty of good, cheap food as well as plenty to drink. Everything was at their discretion, without meal cards or rigid rules: “We ate a large meal in a restaurant. We set our minds not to show the inn keep that we were hungry. But he surely realized we were hungry, not just because of the black fast of the last 24 hours, but also of the long privations we had to endure beforehand. […] A juicy goose steak costs one leu and 40 bani, or one mark, a pork steak and a calf stew, one leu each, or 75 pfennigs. We also get for that price- and it’s truly amazing! – white bread at your discretion, then Romanian country wine, genuine rose liqueur, cheese, apples and cakes […]. We forgot the purpose that brought us to this country. In any case, for a few hours, the only goal of our lives was what to eat and drink. Unwittingly, I thought at the end of the feast, how many laws the inn keep would have broken if this would have happened in our beloved Germany:

1.He gave us bread without a meal card.

2. He put bread on the table without ordering it.

3. He did not charge any money for the bread.

4. He gave us meat without a meal card.

5. He served us more than one kind of meat at a table.

6. The cake contains more butter and sugar than it was allowed.

7. The cake was not made either on a Thursday or on a Friday.

8. These written instructions are not displayed in the restaurant.

Then we also went to a café. There we are told that we can drink coffee mixed in equal parts with milk. We are pleased, because for a long time I have not smelled any coffee beans, and milk is hardly ever seen”.

There is a week-long stopover in Bucharest, where German soldiers enjoy exceptional freedom. The centre of the capital of Romania reminds them of Berlin. Arriving in the capital of occupied Romania on the eve of Christmas, Velburg marvels at the bright and cheerful life he finds here. For the soldiers just coming from a war-stricken Germany, Bucharest is a promised land where one can have everything:

“The most select confectioneries [in Bucharest] are Capșa and Riegler. […] There is a huge amount of whipped cream cakes being consumed, and not only by the weaker sex. A soldier coming from the front had once spent here 12 lei on cakes. Another asked for a mountain of whipped cream to be brought for 40 bani, that is, 30 pfennigs. And our troop is hard at work eating, for it is assumed that German rigor will make the provisions on rationing fat and sugar consumption even on these walls hang in all their splendour. […] There is much to be seen in the centre of Bucharest

. The Germans, for example, are going crazy for what they see in the shop windows. I do not even need to talk about the kinds of food that are displayed. But all objects of current usage which in Germany are a rarity can be purchased here without any problems. Travelling merchants also give the soap cheap […]”.

Following a week of abundance in Bucharest, Velburg and his battalion headed for Feteşti, a somewhat large village on the Danube. He will spend there most of his stay in Romania until the end of November 1917 when he moves back to Bucharest, where he starts working at the central office of population records, organized by the German army. Velburg now finds a much more expensive but equally effusive Bucharest.

At the end of 1917 and the beginning of 1918, everyone in Bucharest, Romanians and German troops and Austro-Hungarians alike, are awaiting the signing of the peace treaty between Romania and the Central Powers. The event takes place on May 7, 1918, in Bucharest, but it is coldly received by the Romanian population of the capital, which for the first time since the beginning of the German occupation is no longer crowded in the luxurious bars of the city centre. The bleak atmosphere in the capital is accentuated by the return of the demobilized Romanian soldiers from the Moldavian front. Velburg is dealing personally with them as an official of the central bureau for population records. All these problems add to the hunger, which is becoming a growing problem after the signing of the Treaty of Bucharest:

“Everywhere you listen, you hear the Romanians sighing because of this «peace». The common people have imagined that, with the signing of peace, the famine will also subside. […] In a side street I see a man who constantly makes the sign of the cross and wailing. I ask him what annoys him and says, «Sir, we will all starve to death if the general peace is not over. How good is this separate peace? ». I have to give him justice. If peace does not end soon, then the winners and losers will also have to face starvation”.

Velburg did not stay much in Romania after that. On May 31, he found out that he would be transferred to the Western Front, where he arrived after a two-week journey under very difficult conditions.