The Central Powers attack the mountain passes of the Carpathians 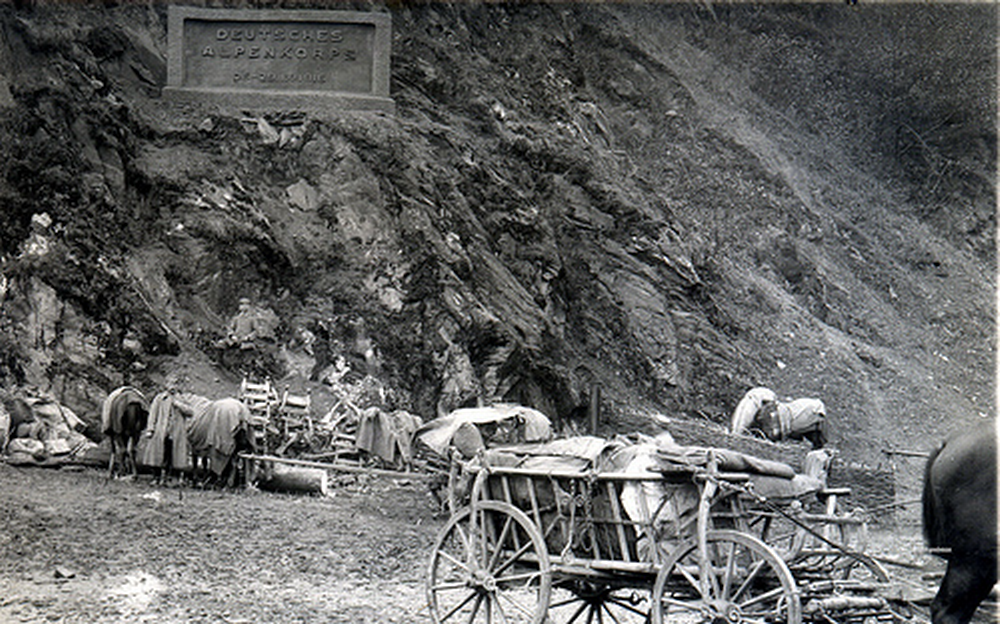 The reaction of the Central Powers to the entry of Romania in the First World War was not waited for too long. The attack of the Bulgarian-German armies at Tutrakan also foreshadowed a large-scale counterattack against the Romanian troops in Transylvania.

On August 29, Hindenburg and Ludendorff met with the head of the Austro-Hungarian General Staff, Hötzendorf, in Teschen and decided to immediately send troops from the Western, Eastern and Italian fronts to Transylvania. Nearly 22 divisions arrived in Transylvania at a rate of 22 trains a day. These were experienced soldiers after two years of heavy fighting and some of them were part of the mountain troops. Overall command was taken by the Germans, as the German First Army of Transylvania was divided into two: to the north the I Corps, under the command of General Curt von Morgen, and to the south, the XXXIX Corps, commanded by General Hermann von Stabs. On September 6, the German 9th Army will be created, under the command of Erich von Falkenhayn. In a few weeks, the Romanian troops were pushed from Transylvania back into the mountain passes.

The battles of the Carpathian mountain passes

On the direct order of his superiors, Falkenhayn ordered an attack on Târgu Ocna. The Austro-Hungarian 1st Army attacked the northern wing of the Romanian Northern Army commanded by General Prezan, while the 17th Infantry Division of the Austrian 9th Army, after fierce fighting advanced through the Oituz pass on October 14, but was stopped by the Romanian 15th Division, that had just arrived from the Dobruja front, a division commanded by General Eremia Grigorescu.

In the Bran pass the Romanian 22nd Division was deployed. The Central Powers attacked with the German 76th Division and a brigade of Austrian alpine troops, which had the role of flanking the Romanian troops through the mountains to the west. The assault started on October 12 and the Austrian surprise attack forced the Romanians to withdraw. Strengthened with fresh troops- the 12th Bavarian Division, the German-Austrian troops continued their advance. The Romanian soldiers withdrew to just 8 kilometres from Câmpulung, taking huge losses, but were out of the danger of being flanked. The 12th Division came to their aid on October 19. Averescu ordered on October 27 an all-out attack, which pushed the German-Austrian troops back inside the passes. For more than a month the fighting was almost constant in the area, attacks followed by counterattacks, with casualties on both sides, until, on November 29, following the general situation on the Carpathian front, the Romanian defence buckled, the city of Câmpulung was occupied, and the passes came under the complete control of the Central Powers.

The Predeal pass was defended by the 21st Division, consisting mostly of reservists, and units from the 10th Division. The attack was started by the Hungarian 51st Division and the 187th Division. On October 14, the city of Predeal was hit by artillery strikes. Heavy fighting took place, with the Romanians successfully repelling enemy attacks until October 23, when the railway station was taken. Two days later, on October 25, after intense street battles the whole city was conquered. Only then did General Averescu gave orders for an orderly withdrawal, with the Romanian troops retreating to a good defensive position north of Buşteni on October 31. The 4th Division was sent to replace the 21st Division, weakened of its strength and with its troops decimated. Until December, when the entire Carpathian front was penetrated by the enemy, the 4th Division successfully withstood the attacks and even counterattacked.

The Olt Defile was crossed by a road and a railway. To conquer the pass quickly, Falkenhayn ordered, in spite of the weather and possible snowfall, that two Austrian mountain brigades attack the valleys and pathways flanking the Olt Valley, to harass the Romanians and to force them to withdraw. Facing them were the Romanian 13th Division and the Romanian 23rd Division, made up of the remnants of the defeated units in the Battle of Sibiu. Even if they were numerically superior to the enemy, they had no experience in mountain combat and were inferior in terms of weaponry. The death of their commander, General David Praporgescu, was a heavy blow to these troops when he was killed during an enemy artillery barrage on October 13. On October 16, the Austro-Germans attacked. The Romanians defended their positions and made some counterattacks. Both sides received reinforcements – the German 216th Division and the 73rd Division, respectively the Romanian 14th Division. On November 10, the Austro-Germans started the offensive again, towards Curtea de Argeş. On November 18, the Romanians tried to counterattack, the battle devolving in brutal hand to hand fighting. Losses were high on both sides. Only after the Austro-German breakthrough through the Jiu defile and their subsequent advance to the east was the defence of the Olt given up.

The fighting in the Jiu Defile

On October 23, after a five-day delay due to the snowfall, Kneussl started the offensive through the Vulcan and Surduc regions, his troops quickly pushing the Romanians backwards, with several strategic heights conquered. The Romanian troops started the retreat to Târgiu Jiu. The Germans advanced to Târgu Jiu, where the militias in the city and the civilian population came to their aid and prepared for armed resistance. Amazingly, this ad-hoc defensive managed to keep the enemy at bay until a Romanian infantry column arrived, that put them on the run. 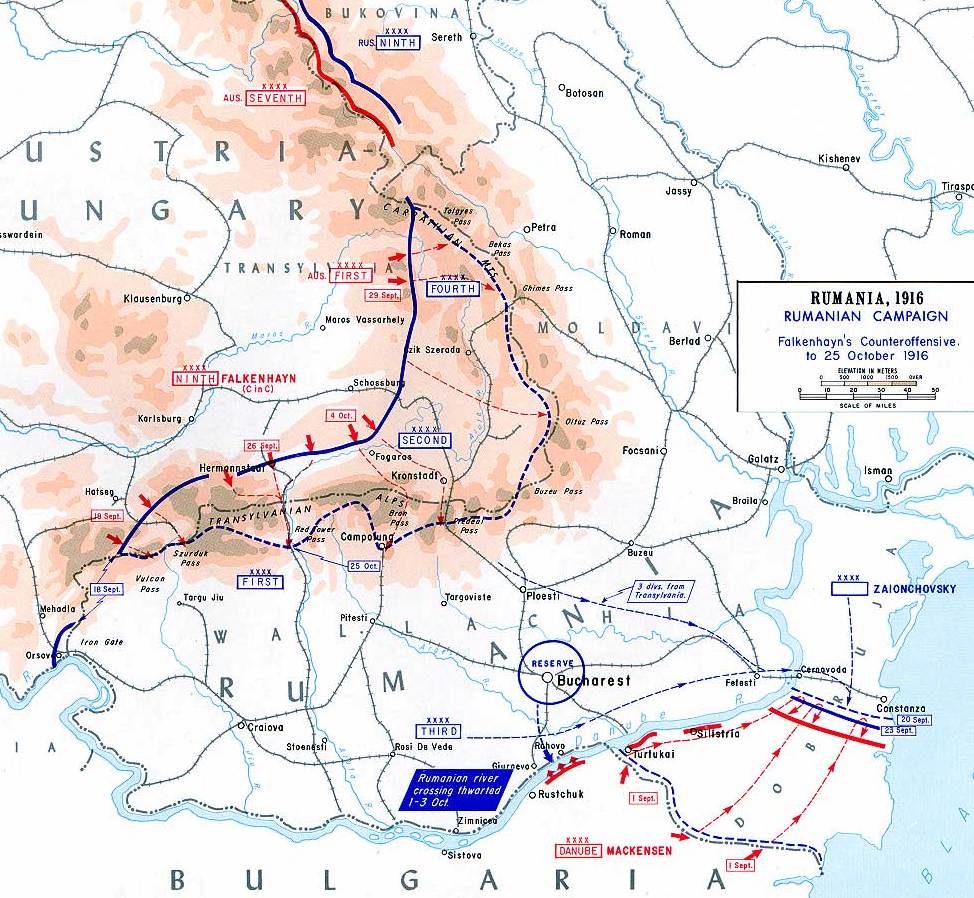 On the morning of October 27, Falkenhayn ordered general Schmettow to charge with his German and Austrian-Hungarian cavalry units the Romanian positions. At the same time, camouflaged by the heavy rain and mist, the Romanians made a surprise attack on the entire enemy front, forcing the rapid withdrawal of the Central Powers, which had to leave behind their artillery or push it in the ravines below.

Falkenhayn had to act quickly before the winter had set in. He strengthened the troops in the defile with another three German infantry divisions, placing all the troops under the command of General Viktor Kühne, while the Romanians were withdrawing the 11th Division from the front to recover, sending instead the 7th Division, but it was too late to make a difference. On November 11, Falkenhayn ordered a general attack and the Bavarian mountain troops managed to infiltrate the flanks and the rear of the Romanians, so that on the 12th the pass was completely in the hands of the Austro-Germans, and on the 15th the town of Târgu Jiu fell after brief struggle with the defending militias. Immediately, Falkenhayn, at the insistence of the German command, ordered the continuation of the attack, being surprised to discover that the Romanians, despite the losses, were positioned south of the city. On November 16 and 17, the sustained attacks of the Germans and Austro-Hungarians breached the Romanian defences, and it collapsed completely, after Schmettow’s cavalry charged through. The Romanian troops withdrew in disarray, a withdrawal that induced the troops guarding the nearby mountain passes to do the same.