The Chrysanthemum Revolution and the proclamation of the First Hungarian Republic 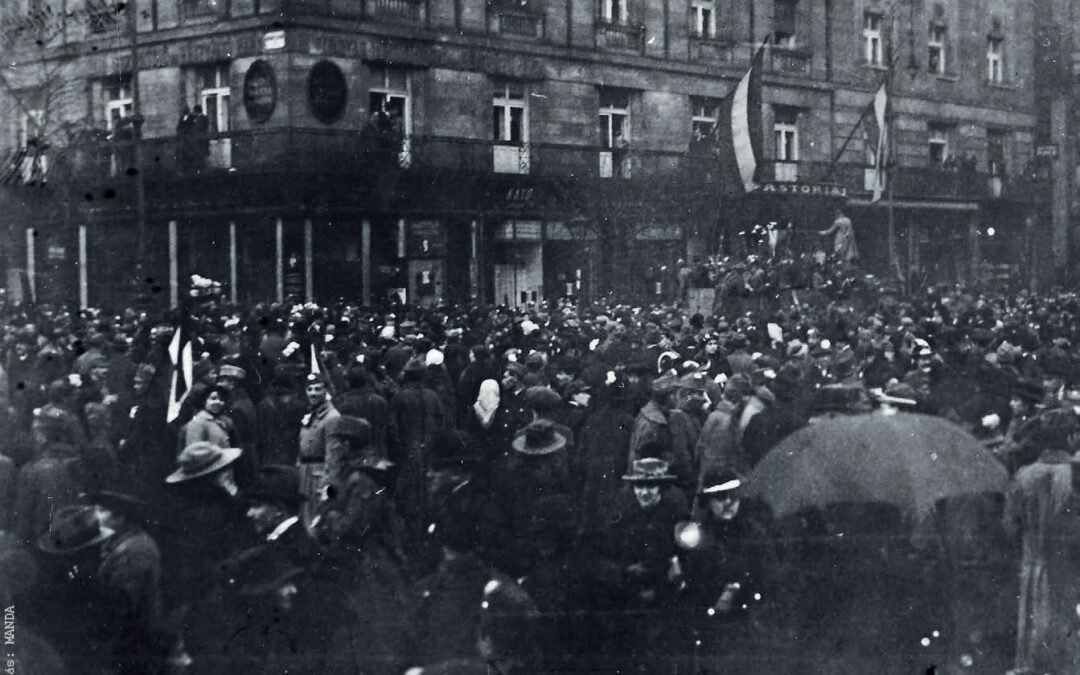 The political crisis in Budapest, caused by the resignation of Hungarian Prime Minister Sándor Wekerle on October 23, 1918, was accentuated by King Charles IV’s refusal to appoint Count Mihály Károlyi as Prime Minister. Due to his pacifism, Károly was considered by many Hungarians to be the best man to save Hungary and to negotiate with the victorious powers in the First World War.

Instead, Charles IV appointed his cousin, Archduke Joseph August, “Homo Regius” (“The Man of the King”), as the provisional leader of Hungary, until a suitable prime minister was found. The king’s decision was not well received in Budapest. On the streets of the Hungarian capital, the situation quickly escalated, the Hungarian soldiers refusing to obey the orders of their superiors and joining the masses, which triggered a spontaneous rebellion.

On October 30, King Charles IV entrusted the task of forming a new government to János Hadik. Károlyi and their supporters were surprised by this popular revolution. The members of the Council were in the Astoria Hotel in Budapest, a place without any defense, and were expecting to be arrested at any moment in a revolution that was not theirs. On the night of October 30 to October 31, Oszkár Jászi confessed to Socialist Zsigmond Kunfi the conviction that they will all be hanged until morning, and he confirmed that he shared the same fears. However, the attack on the Astoria Hotel, expected by the members of the Council, did not occur. At three in the morning, General Lukachich, the commander of the Austro-Hungarian troops, called to Vienna to inform the King about the initial success of the rebellion and asked for instructions. The general also announced that there were slim chances that the troops he commanded would still obey his orders and demanded reinforcements. The King did not give any orders concerning the rebellion, but he was interested in the safety of his children, who were in the city of Gödöllő near Budapest.

After discussing with General Lukachich, Charles IV spoke to János Hadik, who informed him that he wanted to renounce the job he was entrusted with just one day before, and advised the king to appoint Károlyi as prime minister. Charles accepted Hadik’s advice and called Buda, at the residence of Archduke Joseph August, asking him to start negotiations with Mihály Károlyi. When he was called by the archduke, Károlyi conditioned the start of negotiations with the withdrawal of the imperial army from the streets of Budapest.

On October 31, while Károlyi negotiated the formation of a new government at the residence of Archduke Joseph August, the Hungarian revolutionaries supported by soldiers who wore chrysanthemums on their uniforms occupied the headquarters of the main institutions in Budapest. On the same day, the revolutionaries assassinated former Prime Minister István Tisza, who led Hungary in the first three years of the war, after entering his home. The victory of the Chrysanthemum Revolution, as it became known in history, was officially recognized at eight in the morning, when Archduke Joseph August appointed Mihály Károlyi as Prime Minister of Hungary.

On the afternoon of October 31, Prime Minister Károlyi, who also held the office of Foreign Minister and other members of the government, went to the Royal Palace in Budapest to take the oath before Archduke Joseph August. But it soon became obvious that the Hungarian population wanted a republic. Given the popular pressure, the socialists in the government withdrew their oath, but Károlyi and the other ministers refused to do so. So, on November 1, the new government was going through its first major crisis. The fall of the cabinet was prevented by the intervention of Archduke Joseph, who advised the king to release Károlyi from the oath of allegiance. The King accepted, but the republic was not proclaimed.

The popular pressure on the government to proclaim the republic was on the rise, but Károlyi hesitated to do so without a popular vote. As a compromise solution, the government of Budapest sent a delegation to Charles to obtain his abdication. Charles had already renounced the throne of Austria, so he agreed to renounce the one of Hungary as well. On November 13, King Charles IV issued a proclamation announcing that he was giving up the throne and comitted to recognize whatever form of government Hungary was going to choose.

The Republic was formally proclaimed on November 16, in front of a crowd gathered in front of the Parliament. “Nationalism and internationalism were symbolized by the Hungarian tricolor who fluttered alongside the red flag. The mix of ideas present in the new system was reflected by the official name of the new state: the Hungarian Democratic Republic” (Pastor). Only a few representatives of national minorities (Ruthenians, Slovenians and Germans) were present at this meeting. The representatives of the most numerous minorities in Hungary were absent: the Romanians and the Slovaks.