The counteroffensive of the Central Powers in Transylvania 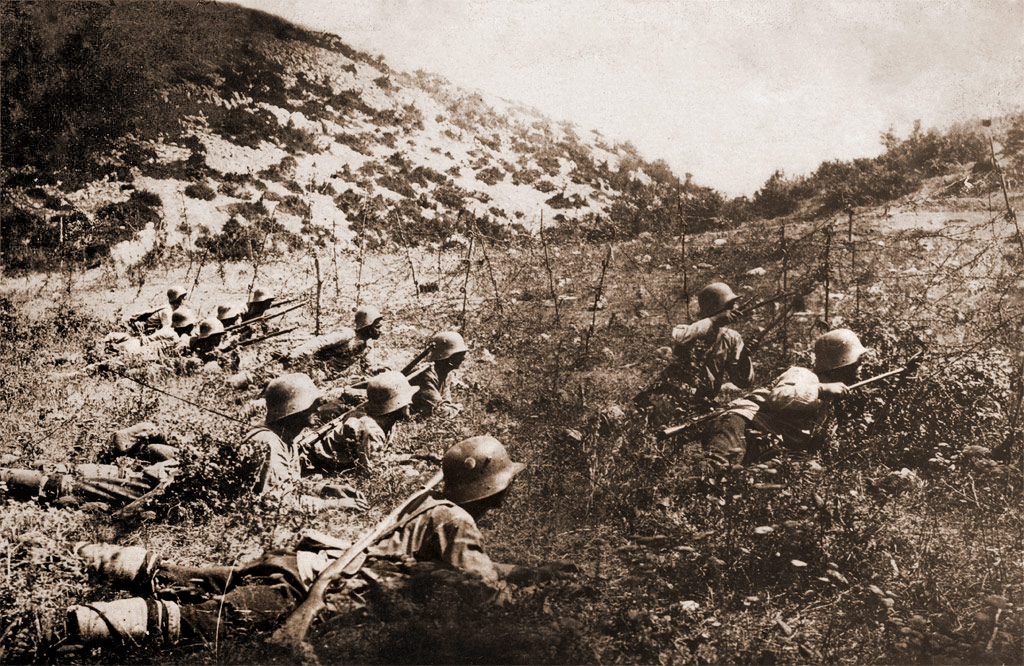 The Germans moved a significant number of troops from the Western Front to Transylvania in order to stop the advance of the Romanian army. It was the beginning of a large operation by the Central Powers, both to the north and to the south of Romania, which would lead to the fall of Bucharest and the withdrawal of the Romanian authorities to Iași.

Three Romanian armies, with a total of about 400.000 soldiers, entered Transylvania on the night of August 27-28, 1916. The Austro-Hungarian soldiers offered little resistance, as it was expected. The Romanian First Army reached the outskirts of Sibiu but did not occupy the city. The Second Army advanced and occupied Brașov and Făgăraș. The Northern Army entered the eastern part of Transylvania and occupied Toplița, Gheorgheni, Praid, Odorheiul Secuiesc, Miercurea Ciuc, Târgu Secuiesc and headed for Târgu Mureș. However, the attack of the German-Bulgarian troops in southern Romania and their rapid advance in Dobruja ruined the well laid plans of the Romanian army leadership. Troops had to be transferred from Transylvania and sent on the Danube front. In the meantime, more and more German and Austro-Hungarian divisions arrived in Transylvania.

On August 29, Hindenburg and Ludendorff met with the head of the Austro-Hungarian General Staff, Hötzendorf, in Teschen and decided to immediately send troops from the Western, Eastern and Italian fronts to Transylvania. Nearly 22 divisions arrived in Transylvania at a rate of 22 trains a day. These were experienced soldiers after two years of heavy fighting and some of them were part of the mountain troops. Overall command was taken by the Germans, as the German First Army of Transylvania was divided into two: to the north First Corps, under the command of General Curt von Morgen, and to the south, the XXXIX Corps, commanded by General Hermann von Stabs. On September 6, the Ninth German Army will be created, under the command of Erich von Falkenhayn.

On September 30, Falkenhayn ordered a frontal assault on the Second Romanian Army combined with an attack on the flanks. On October 3, the Romanian troops withdrew from Făgăraş to Braşov on fortified positions at the foot of the Perșani Mountains, where they did not last very long. On October 5, the German assault was repelled by the Romanian soldiers, who faced yet again attacks from artillery and machine guns. The next day, however, the Romanian troops gave ground and retreated to Brașov. On the night of October 8, Brașov had been completely evacuated by the Romanians with fighting also taking place in the Bran Pass. The Northern Army had also doubled back to its original positions. Taking note of the defeat in Brașov, the commander, General Prezan, withdrew it in an orderly fashion and on 13 October it was safe back in the mountains.

The Romanian army saw itself defeated and chased out of Transylvania 40 days after it passed the Carpathians. Compared with the euphoria of August, there was now only despair. The Romanian troops were demoralized, and the enemy was tightening its grip around the country like a pincer on a front that was too long and difficult to be defended, and with no help from the Allies.

The withdrawal from Transylvania coincided with the failure of the Flămânda Manoeuvre and came after another defeat of the Romanian army, that of Turtucaia. In Bucharest and other cities, the news of these defeats was kept under wraps, but the signs could not be hidden: the wounded who filled the hospitals, the information from those who had found themselves from other sources, or even from the military, the trucks that were loading the archives of the ministries, and then left for Moldavia, the population that began to panic. The autumn of 1916 would be a disaster for the Romanian state and the Romanian army, but the situation wasn’t desperate. The honour of the leaders, of the army and of the country could still be restored by further resistance, on the Carpathians, possibly on the Danube and, finally, in Moldavia.