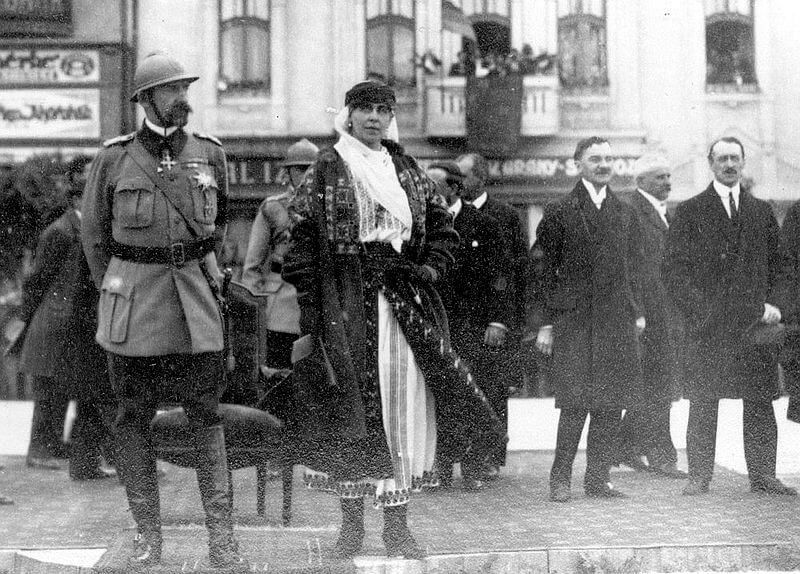 Everyone remembers now how the events of December 1, 1918 unfolded, when the Royal Family entered Bucharest, now the capital of Greater Romania. But after all the festivities, what happened? Under what conditions was life resumed at the Royal Court. Concerning the first day after the Union, December 2, Queen Marie had this to say:

It’s strange, but I’m thankful to wake up in my expensive silver room, still disturbed, but welcoming. Everything seems very big, very spacious compared to how I have lived in the last two years. All morning I was busy with arranging and tidying up my rooms. I started, first of all, with the rooms downstairs, because I’m going to have a dinner party and tea. My prized possessions are still packed, and the furniture is more or less complete. I worked hard all morning and part of the afternoon, and at five o’clock I held a big tea party for the French and British officers who are leaving tomorrow. There were almost two hundred and it was not easy at all to feed them, to talk to them and to be nice to everyone, because there were a lot of them. However, my children and I did everything we could to be good hosts in all respects and to please them and show them how happy we were to be our guests. To my surprise, I found enough pictures to give to everyone. It was a great idea, and they were terribly excited and everyone was thrilled to receive them. I thought it would never end, that much I had to sign. I had just gone up, after saying goodbye, when I was called back down by the fiery Sybille, to be acclaimed. I sat on the balcony facing the large living room and I was frantically cheered by the English and French with cries of hooray! Hip-hip hooray! It was wonderful, flattering and exciting!

Barbu came to sit quietly for an hour and we stayed, as we once did, together again in the brown room, as we had done so many times, for years in a row.

The Robescu family diminished and had fallen on hard times. We talked a lot and we were all very touched and excited.

Prezan received news from Boyle, who is trying to get here, coming from Galați, but is experiencing difficulties. No sign or message that he brought with him aunt Minny or anyone in the family.

No special event. I continued to arrange my house, which means a great deal of effort after such a long absence. But I’m not missing anything. Normal living conditions have not yet been restored: trains, telegraph and telephones are not yet operational. You can hardly find a cart, so people find it difficult to get out of the house”.