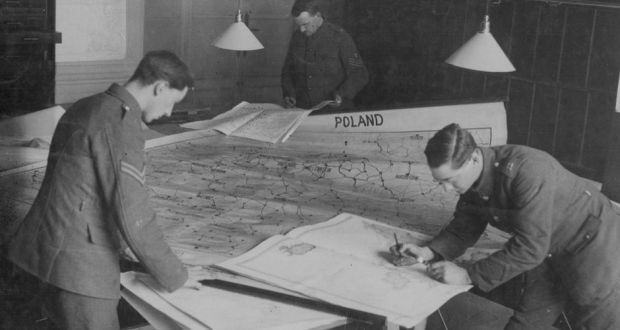 Nearly 100 years ago, the Great War ended with the defeat of the Central Powers. Their military collapse went hand-in-hand with the disappearance from the map of three vast and centuries-old land empires: the Ottoman, Habsburg and Romanov empires.

A fourth, the Hohenzollern Empire, which had become a major land empire in the last year of the war when it occupied enormsus territories in east-central Europe, was significantly reduced in size, stripped of its overseas colonies, and transformed into a parliamentary democracy with what Germans across the political spectrum referred to as a “bleeding frontier” towards the east.

Nor were the victorious western European empires unaffected by the cataclysm of war, as the example of Ireland makes very clear. Relative to its size, the United Kingdom actually lost more territory with the establishment of the Irish Free State in 1922 than Germany in the Treaty of Versailles. And there was serious unrest in other parts of the British Empire, from India to Egypt, as nascent decolonisation movements challenged London’s authority.

But it was in east-central Europe and the territories of the defeated Ottoman Empire that the effects of the lost war and the implosion of imperial structures were felt most keenly and immediately. For centuries, European history had been a history of empires.

On the eve of the Great War, much of the inhabited world was divided into European empires or economically dependent territories, and there was little to suggest the age of land empires was about to end. To be sure, the “awakening of peoples” as a result of 19th-century nationalism posed a significant challenge to the future of imperial rule, most notably in the Balkans, where national and imperial interests collided.

Balkan Wars
Balkan nationalism exploded violently during the Balkan Wars of 1912-13, when a coalition of Serbia, Montenegro, Greece, and Bulgaria expelled the Ottomans from all of their remaining European territories before turning on each other over the spoils of war.

However, the situation in the Balkans in 1912-13 differed significantly from that elsewhere. While there were calls for more autonomy within imperial structures, few in 1914 envisaged a future without the European land empires. At least in hindsight, Europe on the eve of the first World War appeared remarkably stable.

The complexity of the imperial structures that existed in 1914 can be illustrated with the example of the Habsburg Empire. Before the war, Austria-Hungary had been Europe’s third most populous state (after the Russian and German empires), and one of its most ethnically diverse land empires. The allegiance of various different communities was essentially dynastic, in this case to the phenomenally long-lived Emperor Franz Joseph, who ruled between 1848 and 1916.

Following Vienna’s catastrophic defeat at the hands of Prussia in 1866, Franz Joseph instigated a number of reforms, most notably the 1867 Ausgleich, which turned Hungary into a sovereign kingdom with a separate parliament within the Austro-Hungarian Empire.

This was what many among the non-German and non-Magyar ethnic groups within the empire – notably Czechs, Poles, and Croats – aspired to as well. Yet calls for complete independence from the empire were rare. Before 1914, some Croat and Slovene intellectuals within the Habsburg Empire had talked of sharing a common, South Slav, identity with the Serbs, but they were a minority.

It was the outbreak of war in 1914 that changed the equation and soon began to undermine the imperial consensus within the Austro-Hungarian Empire. Initially, however, empire loyalties held remarkably firm. For much of the war, these loyalties (undoubtedly mixed with fears of repression and reprisals) trumped national loyalties as Poles, Czechs, Croats, and even Serbs and Italians fought for the emperor as conscripts.

The internal cohesion of the dual monarchy was undoubtedly weakened by the death of Emperor Franz Joseph in November 1916. Yet, without the eventual defeat of the Central Powers, the dual monarchy would have undoubtedly survived the transfer of power from Franz Joseph to his heir, Karl. The war’s outcome was thus decisive for the Habsburg empire’s fate as was the fact that Allied decision-makers gradually moved away from the idea of preserving the empire and towards the intention of dismantling it.

Allied propaganda
From the start of the war, exile circles from within the Habsburg monarchy, notably of Czech(oslovak) and South Slav background, had made contact with influential experts on central Europe in Britain and France such as the well-connected London Times journalists Henry Wickham Steed and Robert Seton-Watson. They played a key role in Allied propaganda attempts to portray the dual monarchy as a “people’s prison”. Even more important was the skilful manoeuvring of Tomáš Masaryk, a Czech philosophy professor and nationalist politician, who had fled Prague in late 1914 and successfully campaigned in the UK and the US for an independent Czechoslovak state.

Until the beginning of 1918, however, entente decision-makers were reluctant to embrace the break-up of the dual monarchy as an official war aim. Allied plans for the post-war future of the Habsburg monarchy focused on the transformation of the political system and the empire’s constitutional composition without questioning its existence. That said, in January 1918, US president Woodrow Wilson’s Fourteen Points speech advocated an independent Poland and a federal Austria-Hungary, whose peoples “should be accorded the freest opportunity to autonomous development”. Yet autonomy was not secession.

By June, Wilson’s position had hardened: he now proposed that “all branches of the Slav race should be completely free from German and Austrian rule”. When the Allies formally endorsed Poland’s right to an independent state and recognized Masaryk’s dissident Czechoslovak National Committee in Paris as the legal representatives of a Czechoslovak nation, the fate of the Austro-Hungarian Empire was sealed.

Matters were significantly more clear-cut when it came to the Ottoman Empire. Long dismissed by western diplomats and statesman as Europe’s “Sick Man” and oppressor of Christian minorities, the Ottoman Empire’s entry into the war on the side of the Central Powers and its genocidal policies towards the Armenians encouraged those who – like Lloyd George – were determined to break up the empire. Geostrategic and economic interests played a significant role in attitudes towards the Ottoman Empire: some of the empire’s Arab provinces contained large reserves of oil, while other territories – from the Straits to the Middle East – were considered strategically vital by both the British and French.

In May 1916, the diplomats Mark Sykes and François Georges-Picot came to a secret agreement about future British and French spheres of influence in the then still Ottoman-controlled Middle East, notably in today’s southern Iraq, Palestine, Syria and Lebanon. However, in order to encourage an Arab revolt against Ottoman rule, the British simultaneously made promises about post-war “independence of the Arabs”.

Such promises were clearly at odds with both the Sykes-Picot agreement and the Balfour Declaration of November 1917, in which the British government had pledged support for “the establishment in Palestine of a national home for the Jewish people”. For London, these promises were stop-gap measures to mobilise the peoples of the Middle East against their Ottoman rulers. The pledges to the Arabs were never intended to be implemented – a problem that still haunts the Middle East today.

For the Romanov Empire, it was the two Russian revolutions of 1917 that sealed its fate. Following the February revolution, which transformed Russia into a short-lived liberal democracy, Petrograd lost control over Poland, Lithuania, and much of Latvia. Soon after Lenin’s coup that autumn, the autonomous Grand Duchy of Finland broke with Petrograd; Kiev declared Ukrainian independence in January 1918.

Wars and civil conflict
These national revolutions were generally accompanied and followed by years of wars and civil conflict. Despite regional variations in the intensity of violence and its causes, hardly any territories in eastern Europe remained unaffected. In the absence of functioning states, militias of various political persuasions assumed the role of the national army for themselves, while the lines between friends and foes, combatants and civilians, were less clearly delimited than had been the case during the Great War.

Not since the Thirty Years’ War had a series of inter-connected civil wars been as inchoate and deadly as now, as civil wars overlapped with revolutions, counter-revolutions, and border conflicts between states without clearly defined frontiers or internationally recognised governments. German Freikorps soldiers fought with (and against) Latvian and Estonian nationalists (as well as Polish troops in Upper Silesia), Russian whites and reds clashed throughout the region while Polish, Ukrainian, and Lithuanian armed bands fought over ill-defined borders.

The death toll during the short period between the Great War’s official end in November 1918 and the Treaty of Lausanne in 1923 was extraordinary: well over four million people lost their lives as a result of civil wars or inter-ethnic struggles, not counting the millions of expellees and refugees who roamed the new borderlands of Europe.

The abrupt break-up of Europe’s land empires and the inability of the successor states to settle territorial disputes with their neighbours peacefully was pivotal in triggering post-war violence. Newly independent Poland, for example, waged six wars against her neighbours between 1918 and 1920 in order to expand the country’s borders. Under the leadership of Józef Pilsudski, the Polish troops proved highly effective in doing so. In January 1919, Polish troops conquered Lithuania’s designated capital, Vilnius(Wilna/Wilno), and incorporated the ethnically mixed city into the Polish nation-state. For the entire inter-war period, the return of Vilnius to Lithuania remained a rallying point for Lithuanian nationalists and a bone of contention between the two states.

By the spring of 1919, Pilsudski’s troops were also engaged in Upper Silesia against strong German volunteer forces, in Teschen (Teshyn) against the Czechs, and against Ukrainian forces in Galicia. However, the most existential conflict for the newly reconstituted Polish nation-state was the war against Soviet Russia. Only a Polish surprise attack into the Russian army’s rear, still celebrated in national mythology as the “Miracle on the Vistula”, saved the day and secured a Polish victory over the Bolsheviks.

The re-drawing of borders, often started before the Paris Peace Conference had even convened in January 1918, created new states with highly mixed populations. The new Polish “nation-state”, for example, contained a population that was nearly 40 per cent Ukrainian, Belarusian, Lithuanian, or German. Czechoslovakia contained more ethnic people than Slovaks and some three million Hungarians lived under Romanian rule.

The new Kingdom of Serbs, Croats, and Slovenes (renamed as Yugoslavia in 1931) also did not reflect in its name that the state’s population included very sizeable German, Hungarian, Bosnian and Albanian minorities. All of this made it abundantly clear that “self-determination” was only granted to peoples considered allies of the entente (Poles, Czechs, Romanians), but not to their wartime enemies.

It would be wrong, however, to blame the Paris Peace Conference for all the dangerous asymmetries of power that were established after the Great War. The statesmen at Paris were by no means the only architects of the new post-imperial order – often they simply sanctioned decisions that had been made by emerging and victorious states on the ground before the Paris Peace Conference had even met. .

While this national revolution of 1918 was widely welcomed by the new elites of the successor states, it turned out to be a catastrophe for central, eastern, and south-eastern Europe. Admittedly, the old empires had been autocratic to varying degrees (with Romanov Russia being the most despotic), but the successor states validated at the Paris Peace Conference were not without serious flaws.

Populated by large, resentful minorities that felt oppressed by the new dominant majorities, most of the successor states proved unstable and eventually gave way to an authoritarian dictatorship of one kind or another.

The complex mix of tensions between post-imperial state-building, the challenge of managing ethnic diversity in states that wanted to be homogenous, and the irredentism of aggrieved minorities would remain one the most explosive issues on Europe’s political agenda between 1918 and the forced “unweaving of peoples” during and after the second World War.