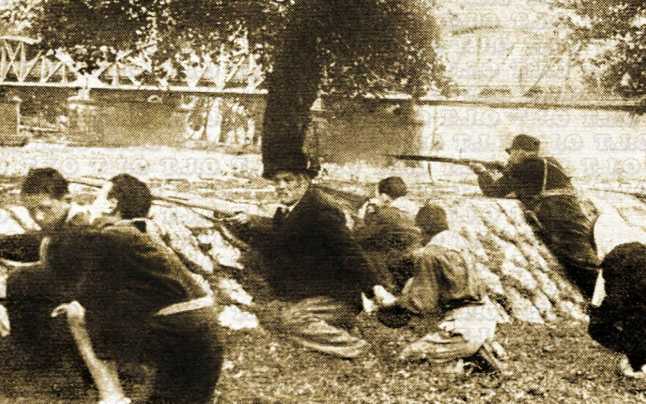 On August 27, 1916, the troops of the Romanian army entered Transylvania. The Central Powers reacted quickly to the entry of Romania in the war on the side of the Entente. The combined German-Bulgarian armies attacked the Romanian forces in the south, at Turtucaia, and in order to counter the Romanian troops advancing further into Transylvania, the Germans transferred troops from other fronts.

Over 22 divisions from the Western, Italian and Eastern Fronts arrived in Transylvania in just three weeks. The troops that were brought in were very experienced. The German First Army in Transylvania was divided into two: to the north, the I Corps, under the command of General Curt von Morgen, and to the south, the XXXIX Corps, commanded by General Hermann von Stabs. On September 6, the German Ninth Army was created, under the command of Erich von Falkenhayn, and a few weeks later, the Romanian troops were pushed out of Transylvania, but were still in control of the Carpathian passes.

The troops of the Central Powers tried breaking through the Bran, Predeal and Oituz Passes and through the Olt and Jiu Gorges. For strategic and geographical reasons, Erich von Falkenhayn chose to attack in force the Jiu Gorge, because it was the shortest and offered the best opportunity to surprise the Romanian troops. In this defile, the Romanian troops were the most vulnerable. It was defended by the Romanian 11th Infantry Division, which was exhausted and understrength. Against it, the Central Powers gathered a series of impressive forces, under the command of Bavarian General Paul Ritter von Kneussle, composed of the Austrian 144th Infantry Brigade, the Bavarian 11th Infantry Division, the German 301st Infantry Division, the German 6th Cavalry Division, and two German bicycle battalions. The German 7th Cavalry Division and the elite Wurttemberg Mountain Battalion (BVW) were also on their way. Lacking any sort of military intelligence, the Romanian troops did not know about the large concentration of forces in front of them.

Breaking through the Jiu Gorge

On October 23, after a five-day postponement due to heavy snowfall, Kneussl started the offensive through the Vulcan and Surduc areas, his troops rapidly pushing back the Romanians, gaining a number of strategic heights. Romanian troops started their retreat towards Târgiu Jiu, at which point the Romanian Command ordered the urgent dispatch of General Ioan Dragalina to the scene. Dragalina appreciated the situation as “serious but not desperate” and ordered a series of local counter-attacks. While on the front, Dragalina was seriously injured and eventually succumbed from his wounds two weeks later.

The troops of the Central Powers advanced to the outskirts of Târgu Jiu where they encountered a bridge crossing the Jiu River. This is the moment when the Romanian militias in the city and the civilian population came to the aid of the army and prepared an armed resistance. Old people, young people and even women seized their weapons and prevented the Germans from crossing the bridge. Surprisingly, this fierce ad-hoc defence managed to hold the enemy in place until the arrival of a Romanian infantry column, which scattered the enemy troops. The Germans were forced to retreat to the mountains north of Târgu Jiu.

The counterattack of the Romanian troops forced Falkenhayn to react quickly in order to cross into Muntenia before winter set in. He reinforced the troops in the defile with three more German infantry divisions, putting all the troops under the command of General Viktor Kühne. Romanian High Command withdrew the 11th Division from the front, and sent in its place the 7th Division, which arrived too late to make a difference. On November 11, Falkenhayn ordered a general attack, with the Bavarian unit of mountain troops managing to fall on the flanks of the Romanians, so that on November 12the pass was completely in the hands of the Germans, and on November 15the city of Târgu Jiu fell, after a brief fight with the remaining militias.