The end of the Battle of Mărășești 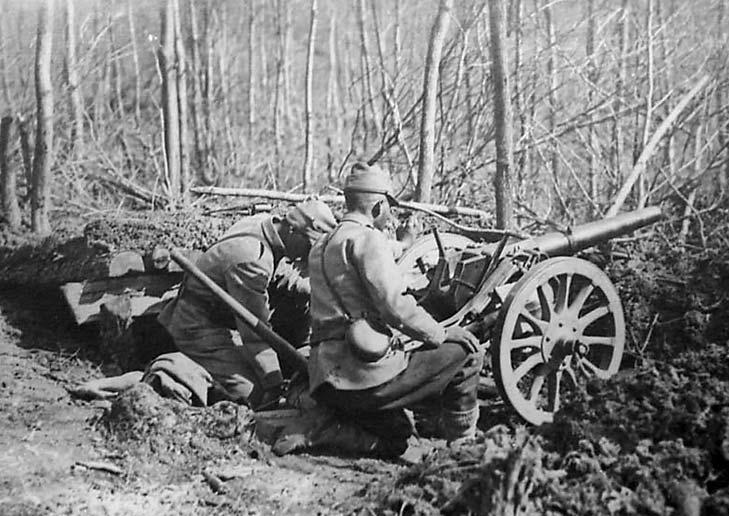 The Battle of Mărășești began on August 6, 1917, with the attack by the German First Corps, led by von Morgen, of the Ninth Army. The German assault was focused on a section of the front only ten kilometres wide, between the Siret River and the Focșani-Mărăşti railway. Nearly a week of heavy fighting forced the Germans to stop for respite. On the other hand, despite heavy losses on the Romanian side (nearly 12.000 men), four more divisions were already on their way to the front. The Russians also suffered serious losses.

On August 14, the German 18th Corps resumed its advance to Muncelu, launching an attack against the Russian 8th Corps. During a German attack accompanied by artillery fire, a regiment of the 15th Division retreated into disarray, causing a breach in the front, closed after a bayonet counterattack made by the soldiers of the Romanian 10th Infantry Division, who were at risk of being encircled.

The losses were heavy on both sides. The Alpine Corps “suffered enormously”, according to a German document, while Russian prisoners estimated their own losses at 50%. Spending the afternoon of August 15 at the top of the Odobești Hill in order to oversee the battle, German general Mackensen observed that “The Russians and Romanians keep bringing in new divisions”.

The counter-battery fire between the Germans and the Romanians was the most vicious of the entire battle of Mărășești. At half past nine in the morning, the German infantry attacked the 13th Infantry Division, after a gruesome fight with grenades and bayonets, the Romanians had to abandon the factory, retreating on the second line of defence in the city’s perimeter. The 9th Infantry Division is also forced to retreat to the second line of defence, which ran across the front of the railway station. Machineguns that were installed there decimated the enemy. The 13th Infantry Division sustained the brunt of the attack. Its defensive line was unfinished, but had the support of 25 artillery batteries. German troops had to be spread thin to avoid the fierce enemy fire. A soldier from the 12th Bavarian Division later noted that not “even in Verdun had I seen such terrible artillery fire”. The centre of the line of defence, Hill 100, gave the attackers the chance to encircle Mărășești and a large portion of the Romanian First Army, and there was heavy fighting. One battalion of the 51st Regiment lost all of its officers; one of them, Captain Grigore Ignat, when all his men died, did not hesitate and stood his ground. The next day, medics discovered under two rows of corpses 8 machineguns and the body of Captain Ignat still clutching to one of them, an episode that transformed him into one of the most famous Romanian heroes of the war. On the right flank of the 13th Division, the 47th Regiment, under the command of General Radu Rosetti, was also taken out of combat, Rosetti himself being seriously injured.

When the situation seemed to get worse for the Romanians, General Popescu, the commander of the 13th Division, ordered the reserves to execute a counterattack on both sides of the German attack. At the same time, General Henri Cihoski, commander of the 10th Division, started his own counterattack. The enemy withdrew, the troops of the Austrian 13th Division fleeing in disarray and abandoning their weapons, while the Russian artillery men cheered on their comrades with “bravo rumînskii!”. The victory triggered a wave of enthusiasm throughout the First Army and proved to be the turning point of the Battle of Mărășești.

The failure of the offensive had a decisive effect on the German High Command. Ludendorff himself eliminated the possibility of prolonging the offensive when he informed Mackensen on August 24 that the Alpine Corps and the 13th Division will be transferred to Italy in early September.

On August 28, before the two units could be transferred, the Ninth Army launched one last offensive and occupied Muncelu, while the Russians retreated northwards. On August 29, units from the Romanian 9th Division, Romanian 13th Divisions and Russian 15th Division were brought in to recover some of the lost ground. The attack was carried out with bravery, even by the Russians who attacked Muncelu directly. On September 1 and 3, Romanian troops only managed to touch the barbed wire fence in Muncelu, without being able to take back the town. It was the moment when, given the exhaustion of forces, both camps decided to fortify the existing frontline for its permanent occupation. The Battle of Mărășești was over.