The evacuation of Budapest: The withdrawal of the Romanian army (IV) 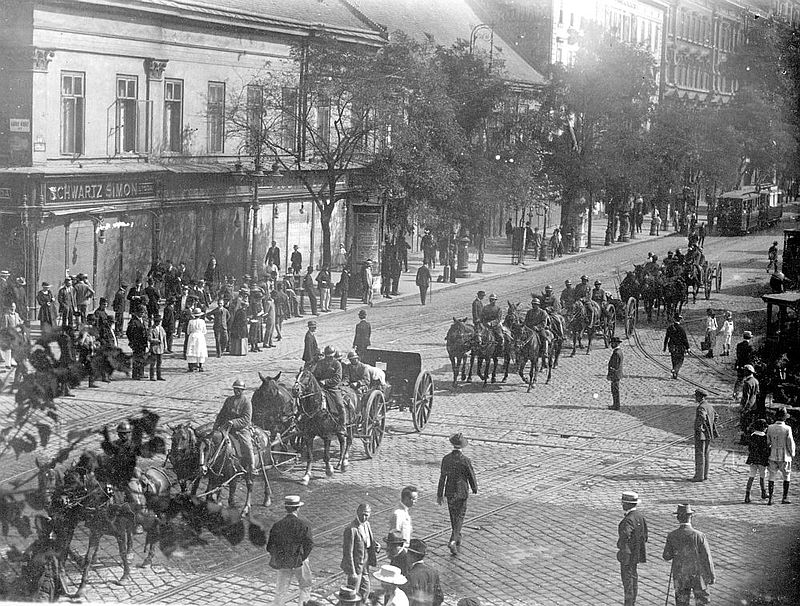 General Holban, the military governor of the capital, appeared before the generals of the Inter-Allied Military Mission with the evidence of a military conspiracy directed against the Romanian army, involving even prime minister Friedrich Istvan.

General Bandholtz had the following to say about this meeting: “… Holban began digging in the mountain of documents for evidence of an Hungarian conspiracy, which I endured for half an hour and then told the Mission that I did not see a reason to waste our time”.During that meeting, Diamandi also pointed out that Prime Minister Friedrich was involved. In order to avoid other unpleasant situations through a possible arrest, he only asked for his better surveillance.However, not long after the meeting something odd occurred. Friedrich was allegedly pursued by Romanians who wanted to arrest him, and ran to General Bandholtz’s home for refuge.Coincidentally or not, one could speculate that taking advantage of this moment, the prime minister staged the event in order to further discredit Romanian authorities.

In fact, the tactics used to gain the sympathy of the representatives of the Great Powers proved fruitful, the Hungarian officials managing to impress them with luxury and sophistication. Bandholtz wrote admirably in his diary: “Our offices in the royal palace are tremendously beautiful. This magnificent building must have cost millions and no effort or expense was spared. The walls of each room are covered with the same material as the room furniture, apart from the magnificent ballrooms, whose walls are made of marble and whose details are beyond any description”.He continues: “Tonight Colonel Loree, Captain Gore, Lieutenant Hamilton and I have moved into our new residence, the residence of the Earl of Edelsheim, where we have the most spacious and almost palatial rooms”.

He became a supporter of the Hungarian cause, writing indignantly that: “The surrender of parts of Hungary with its civilized and refined population would be like the surrender of Texas and Florida to the Mexicans. The Great Allied Powers should bow their heads in shame for what they let happen this country after the armistice”.When it came strictly to Romanians, he finds no room for compliments and erupts angrily: “It is impossible to conceive of such a national depravity as that shown by those miserable Latins”.

Beyond these personal attitudes and opinions, harassment continued in connection with war spoils consisting of more than 60.000 rifles, revolvers and machine guns, 348 cannons, 332 machine guns, 87 airplanes and large quantities of ammunition. The fact that Romania kept them for itself created strong dissatisfaction, the Allies considering them common war spoils and therefore had to be shared with the rest of the members of the Entente.

In Hungary the anti-Jewish sentiment was on the rise. Bela Kun’s Jewish roots and of those he surrounded himself with, and the rumours that the Jews were giving money to the Romanian authorities for various favours certainly did not help.Because the prefect of Budapest did not bother to put a stop to the acts of violence committed against them, General Holban personally admonished him for his negligence. In fact, several anti-Jewish actions in the capital had to be thwarted several times.

In the meantime, Horthy’s white guard promoted fierce anti-Semitism, especially in territories he controlled in western Hungary. This is why the news that the Romanian troops were about to leave was so disconcerting for the Jewish population.

The evacuation of occupied territories

In November, the Romanian army begins its withdrawal, after long negotiations and pressures. After more than ninety days, the occupation of Hungary ends.On November 14th, Romanian troops leave Budapest, and on the same day Admiral Horthy entered the capital.

However, since October 11th, knowing that the withdrawal was imminent, various ministers started criticising the Romanian army.Minister Schnetzer declared: “If the Romanians do not voluntarily leave Budapest, we will force them out, with the help of our Serbian brothers. I’m allowing three days of terror for the white troops to thank the Jews for the good protection they had received from the Romanians”.

On November 3rd, a meeting was held in Szekesfehervar in which Gyula Rubinek, the Minister of Public Works, praised Prime Minister Friedrich and his government.Szabo Istvan, the Minister of Agriculture, demanded that all the gunowners enlist in the army, in order to fight against the Romanians.Not only politicians but also newspapers commented on the evacuation. The publication “Esztergom es Videko” informs that the Romanians had to evacuate the territory between the Danube and the Tisza and that in Szolnok the railway is full of wagons loaded with goods stolen by the Romanians.

The Hungarian delegation to the Paris Peace Conference begins handing out notes to the representatives of the Great Allied Powers showing that the Romanians wanted nothing more than the plunder of Budapest and Hungary.The “League for the Integrity of Hungary” formed shortly after the withdrawal of the Romanians from the most influential people in the government, started anti-Romanian propaganda actions. Brochures began to appear in which the Romanians were made responsible for the plundering of Hungary, with caricatures of Romanian soldiers with their hands full of plundered goods, with Jews pushing them from behind.

In fact, violence against Jews began immediately after the evacuation of Hungary. In the city of Kecsemet alone, 64 Jews are killed.Less than two months after the departure of Romanian troops, in January 1920, more than 100.000 Jews signed a petition calling on the Peace Conference to have the Romanians return to Budapest because of the atrocities of the Horthy regime.Amid worsening diplomatic relations, Romanian freight transports with essential supplies to Hungary were stopped.

In a departure from official Hungarian policy, the weekly newspaper “The world” published in Budapest on February 12th, 1920 the article “Short objections”: “The Romanian army evacuated Budapest a few months ago. Its conduct in Hungary was generous and correct and it is a pity that its honest deeds are confused with some local misunderstandings. As for the requisitions that have been made, they are far inferior to those made by the Hungarians in Romania … We are sure that Romania remains faithful to its old loyal and human traditions and will restore the consequences of the requisitions. We bond ourselves with love for Romania and we cannot confuse its attitude as an occupier with that of Hungary”.

Feelings shared by a large number of Hungarians who were honest witnesses of those undertaken by the Romanian army.We should not be surprised then, that for a while the union of Hungary with Romania was considered in the highest political circles of both countries, but was denounced by those factions that eventually took power by force in Hungary and that, in the following years, continued to promote Hungarian irredentism.