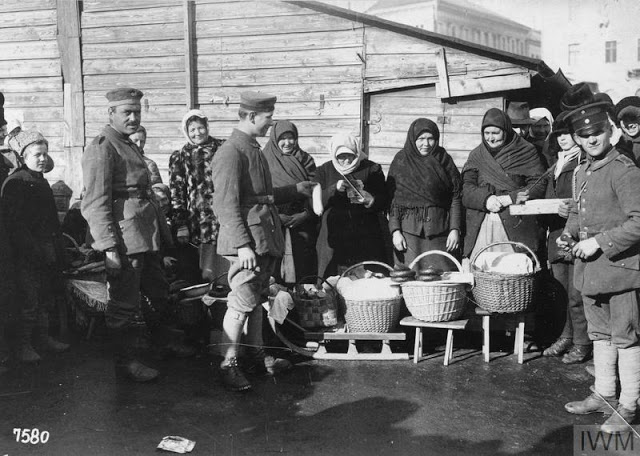 Even though Romanian economy suffered during the occupation period (1917-1918), for a better exploitation of Romanian resources, the German military administration had to bring back into operation a series of industrial enterprises, such as oil wells, railway workshops or metallurgical plants such as Vulcan, Wolff or Lemaître. Particular attention was paid to the development of agricultural holdings and forced labour was introduced, using peasants and prisoners of war.

Perhaps the most important success of the military administration in this respect was the return to operation of oil wells in Prahova that were burned down at the initiative of British colonel John Norton-Griffiths at the end of 1916. As a result of the German efforts, the oil production of occupied Romania rose to 666.841 tonnes in 1917, respectively 817.921 in 1918.

The oil wells in the Ploiești- Câmpina area (Prahova County) enjoyed special attention from Kaiser Wilhelm II. During his visit to Romania in September 1917, the German sovereign insisted in personally seeing the progress in the exploitation of Romanian oil. The event was reported by the German propaganda press in Bucharest, which praised the German “diligence and tenacity”, which contributed to the reconstruction of the Romanian extractive and productive capacities:“[…] the emperor left Ploiești to Câmpina, where the English detachments led by general Thomson, of sad memory, have in the past caused such terrible ravages to the petroleum fields. The land, simmering with flames, covered by clouds of smoke last year, from September to October, is no longer recognizable. German diligence and tenacity have managed so far in healing many of the wounds. In other places they are just now starting to undo the heavy damage done to the country by the English Allies. In any case, exploitation restarted on a large scale. The emperor asked to be shown all stages of oil extraction, cleaning and separation of light gasoline, heavy fuel oil, light oils, turpentine, machine oil, various types of grease and paraffin. These products serve exclusively the needs of the German army and industry, whose machines works mostly thanks to the oils from Câmpina. After the emperor visited the collection of iron debris, bailing spoons, stones, and bricks, which German engineers managed to remove out of the wells plugged by the English with ill will, the emperor headed for the town of Câmpina”. (The Bucharest Gazette, Thursday, September 27, 1917).

Measures for the development of agricultural holdings

The German military administration paid great attention to the grain harvest. Order No. 2 of 1917 stated the obligation to have all agricultural fields worked and stipulated that those who would escape the obligations imposed upon them would be fined or sent to prison:“The exploitation of the estates and peasants plots must be started and carried out as in normal times; in principle, the following will be observed: 1. All the fields will be cultivated by the landlords or by the lessees themselves. If the fields cannot be worked out by landowners or lessees, then the fields must be worked in any case in common by the commune’s inhabitants. Fields that cannot be worked by landowners will be given to the peasants […]. 2. As soon as time is favourable, the spring tillage must begin with all hands at once. 3. First and foremost, the following will be sowed: peas, oats, summer barley, summer wheat, maize, oleaginous plants, potatoes, millet, pumpkins, sunflower […]. 4. Mayors will be responsible for the good care and complete work on the fields […]. 6. Whoever does not fulfil his duty shall be punished by a fine or imprisonment, or the liberty to cultivate his own land will be taken away from him […]”

The Bucharest Gazette announced in April 1917 an ordinance of the Ilfov Command (a county in the vicinity of the capital) that the peasants were forced to work, including on Sunday: “Only during Easter Sunday will the rural population be exempt of work, all others will be working days”. In order to carry out agricultural work, the occupation forces did not hesitate to forcefully relocate inhabitants of some counties, especially from the mountains, which were transported under military guard wherever labour force was needed, especially in the lowland counties. The refusal to work was punished by a fine of up to 10.000 lei or imprisonment for up to 3 years. Also, in order to ensure the necessary labour force for agriculture, occupation forces used prisoners of war, some brought from the camps in Austria-Hungary and Germany.

The main cause of these decreases was the lack of traction animals that were “bought” by Austro-Hungarians. In fact, they were requisitioned for which the owners received a paltry compensation and then transported to Austria-Hungary. As a result, in 1917, the number of cows fell by 26% over the previous year. In order to stem the fall in the number of animals, the occupying forces issued the Order No. 52 of 22 January 1917, which prohibited the cutting of yoke oxen, dairy cows, even pigs and poultry.