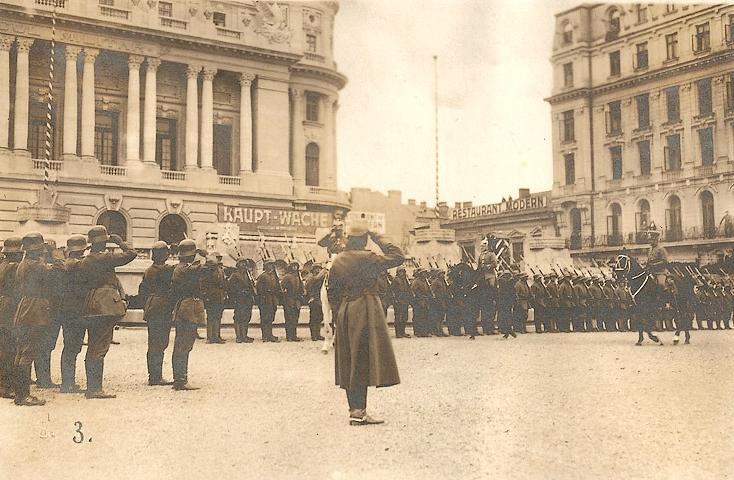 The data gathered from Romanian and German archives provides us with an overview of the plunder perpetrated in the occupied territory of Romania during the two years of German military administration. Between December 1916 and November 1918, large quantities of petroleum products, food, fodder and other goods were confiscated for the benefit of the Central Powers, especially Germany.

In order to cover up the extent of the plunder, the German military administration tried to create the pretence of legality by paying for the requisitioned products and the forced labourers with banknotes issued by the Romanian General Bank in Bucharest, which in January 1917 acquired issuing rights, based on a deposit in marks at the Imperial Bank of Berlin. In fact, this deposit belonged to the National Bank of Romania, so for all intents and purposes the issue of banknotes by the Romanian General Bank presented no guarantee, rendering them practically worthless. The Romanian population was required to accept these banknotes, which were temporarily used in the occupied territory.

According to the statistics produced by the German command of Romanian railways, during the occupation, 1.140.809 tons of oil, gasoline and petroleum products were transported from Romania, of which 889.944 tons were sent to Germany, 231.176 tons to Austria-Hungary, 13.825 tons in Turkey and 5.864 tons in Bulgaria. During the same period, 2.161.905 tons of food and animal fodder were shipped out of Romania.

In addition to these official figures, it should be noted that the occupation troops were free to requisition whatever products they needed, and that the statistics did not include those. Each soldier had the right to send home to his family up to 25 kilograms of food, flour, beans, vegetables and preserved meat every week.

Nearly 18 billion francs worth of damages

Besides the petroleum products and food, that were meant to be transported to Germany, Austria-Hungary, Bulgaria or Turkey or used for the consumption of occupation troops, there was also widespread destruction in the occupied Romanian territory. The damages caused to the Romanian railways were estimated to be 887.769.000 gold francs. The damages caused to the forest fund have been estimated at 503 million gold francs, and 12.000 tons of industrial machinery and 125.000 tons of building materials were confiscated by occupation forces.

In addition to these requisitions, confiscations and damages, the Central Powers forced the occupied territory to provide a 250 million lei war contribution, to be paid as a loan guaranteed by each county.