The Finns in the First World War 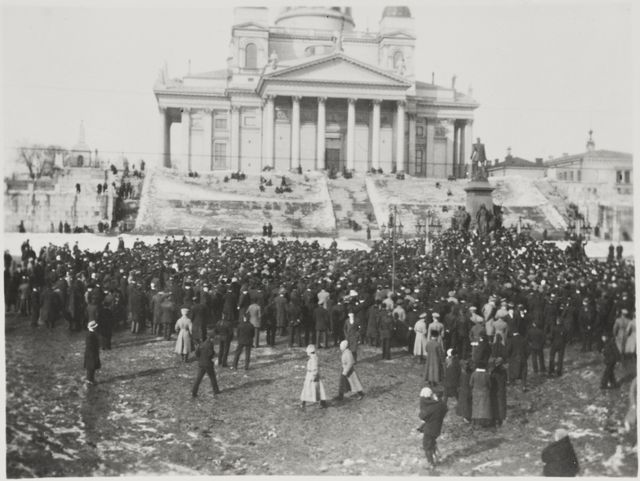 At the beginning of the First World War, Finland was an autonomous Great Duchy within the Russian Empire. Even though the Finnish territory was spared of most of the fighting, it witnessed a series of military operations for three and a half months during the Civil War (January 27th – May 15th, 1918). The global conflagration and its consequences had decisively influenced the destiny of the Finns, and unexpectedly, the evolution of the conflict and the collapse of Tsarism led to Finland’s independence.

In the summer of 1914, the Russians were afraid that the Finns might revolt or that the Swedes would attack Finland, but none of these scenarios materialized. On the 30th of July, a state of war was declared in Finland on the orders of the Tsar. The outbreak of the conflict was a total surprise for the Finns and panic quickly gripped the populace. There were rumours that the Germans were preparing to invade Finland, and that the city of Helsinki was going to be bombed.

The Great Duchy of Finland did not have an army and it was not required to send soldiers to the front. However, many Finns joined as volunteers in the Russian army, some of them reaching the rank of general, such as Carl Gustaf Emil Mannerheim, the future Marshal of Finland and president of the country between 1944 and 1946. There were only 500 Finns that volunteered to fight in the Russian army in the autumn of 1914. They were joined by doctors and nurses who worked at the front.

From the Russian point of view, Finland was a very sensitive area due to its close proximity to Sankt-Petersburg. Because of this, the Russians payed a higher importance to the Finnish territory, fearing a possible landing by German forces near the capital of their Empire. By the end of 1914, about 35,000 Russian soldiers were deployed in Finland, stationed at different strategic points.

The loyalty of many Finns to the Russian Empire, evident at the beginning of the war, gradually deteriorated due to the oppressive measures taken by the Russians, as well as due to their attempt to annihilate the autonomy of the Grand Duchy. These actions during the war were seen by the Finns as an attempt at total assimilation.

As a result, in May 1915, a group of Finnish activists made an agreement with the Germans, which allowed for about 2,000 volunteers that fled from Finland to benefit from military training in Germany. These Finnish volunteers formed a military unit called the Jäger Battalion, and in May 1916 they were sent to fight on the Eastern Front. The exodus of these Finnish activists to Germany became known as the “Jäger Movement”, and as a consequence the Finns lost the Russians confidence.

These Finnish volunteers were mostly young students. Most of the Finnish political class adopted a more conservative stance, believing that the traditional attitude of loyalty towards Russia would be beneficial to Finland. The politicians were pleased that the country had not been directly affected by the war and hoped that this situation would remain the same.

In 1917, two paramilitary forces were created in Finland: the Red Guards and a Security Corps, which later became a part of the White Army during the Finnish Civil War which lasted from the 27th of January 1918 to the 15th of May 1918 and which was triggered by the Finnish proclamation of independence on the 6th of December 1917. The whites were better organized and benefited from the involvement of members of the Jäger movement and had commanding officers with experience in the Russian Army.

The Finnish economy during the First World War

The war had significantly affected the Finnish economy. The most important industry, the wood industry, had been severely hit by the loss of Western export markets. However, the metallurgical industry benefited from Russian war orders, which made possible an unprecedented development. Production values increased fourfold in three years, and the number of employees doubled in only two years.

The economy of Finland became virtually dependent on Russia’s war effort, which contributed to a industrial and agricultural boom. Farmers also exploited new markets in Russia, especially for meat and dairy products, but the Finns were dependent on grain imports from the Russian Empire. The cereal shortage affected the Finnish population, especially since 1916. If that year the average consumption of rye was about 157 kilograms per person, in 1917 it dropped to 61 kilograms per person. And inflation was felt, especially since the autumn of 1916, when prices rose up to four times.