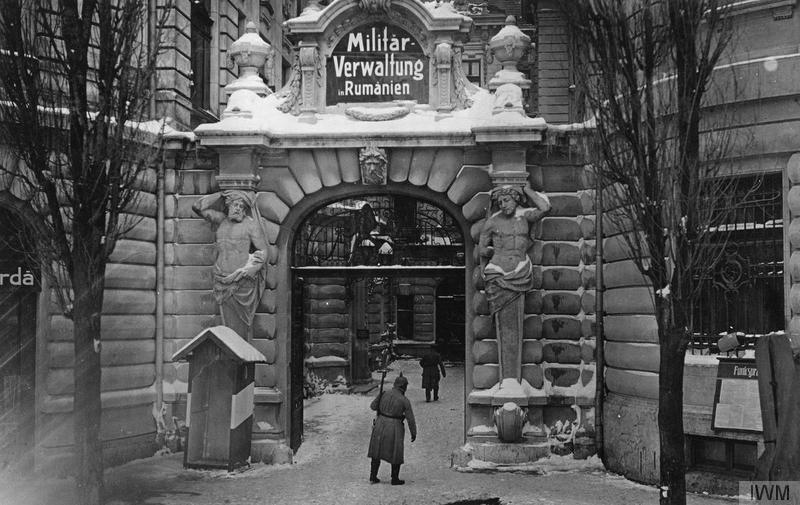 Following the failure of the 1916 campaign, about two-thirds of Romania’s territory came under the occupation of the Central Powers. The occupation forces, especially the German ones, wanted to punish Romania for entering the war against them and, in particular, to extract as many resources as possible from the occupied territory to continue their war effort. General Erich Ludendorff acknowledged in his memoirs that the occupation of a part of Romania has brought considerable benefits to Germany by improving the supply of wheat and oil. For two years, as long as the occupation lasted, the Romanian resources were systematically robbed through forced requisitions, for the benefit of the Central Powers, especially Germany and Austria-Hungary.

The Romanian occupied territory was divided into three zones: I. The War Zone (Buzău, Râmnicu Sărat, Brăila, Putna and Dobruja); II. The Bucharest Zone (which included parts of the Ilfov County); III. The Military Governance Zone of Romania (the rest of the occupied territory).

Field Marshal August von Mackensen was appointed military chief of the occupied territory. The headquarters of the occupation forces was established in Bucharest, where the command, the quartering, supply, police, medical, and diplomatic services were located. The military administration was led by General Erich Tulff von Tschepe und Weidenbac.

The main instrument of the military administration in the occupied territory was an economic general staff called Wirtschaftstabul, consisting of a central office in Bucharest and a network of branches in the country. The central office consisted of 17 sections, each representing a branch of production or economic organization.

Requisitions for the benefit of the Central Powers

Occupied Romania was a vital source of grain and oil for Germany and its allies. General Ludendorff admitted that “we were forced to remove all that we needed from this country [Romania] and give it to the consumer”. The priority of the German military administration was the strict rationalization of the necessary resources for the population and the use of the entire surplus in the interests of the Central Powers. For this purpose, the most used method was that of requisitions.

For example, Alexandru Tzigara-Samurcaş, head of the Police, appealed to the citizens of Bucharest on January 23, 1917, stating that “the city of Bucharest is obliged by the German imperial government to procure until six o’clock in the evening the following: 15.000 quilts or blankets, 20.000 shirts, trousers, woollen stockings, 30.000 gowns and flannel vests and 1.000 furs. By failing to do so, the city will be subject to a fine. Every citizen is therefore obliged to surrender to our agents several of these objects”.

An ordinance of General Tulff von Tschepe und Weidenbac on 11 February 1917 regulated the work program of the economic general staff in order to ensure an organized dispatch of food stocks to Germany:“Grain and fodder stocks in Romania must be dispatched as quickly as possible to our homeland. This is the main issue that preoccupies the military administration. To supply the homeland, in the most extensive way, I instruct all stage commanders to work with all their might to achieve the goals outlined above”.

When the entire cereal production was requisitioned, the occupation forces switched to sugar, wine and other food stuffs. It was forbidden to slaughter cattle and poultry, and implicitly the consumption of the meat obtained from these animals. Almost every day, orders were issued to hand over of food, domestic animals, fodder, and many objects: weapons, bottles, furs, mattresses, church bells, and other metal objects.

An ordinance dated January 22, 1917 forced peasants to declare the number of domestic poultries to the stage command and hand over an appropriate number of eggs. Sheep and cattle owners were also forced to hand over a quantity of milk. Forests were cleared and the occupation forces even imposed the cutting of trees in some urban parks, and the wood was exported to Germany and Turkey. By the measures taken by the German military administration, the order of the Field Marshal August von Mackensen in April 1917 was met:“The most important duty of the German administration in Romania is to exploit the country in the most thorough manner for the benefit of Germany”.