The French Military Mission in Romania 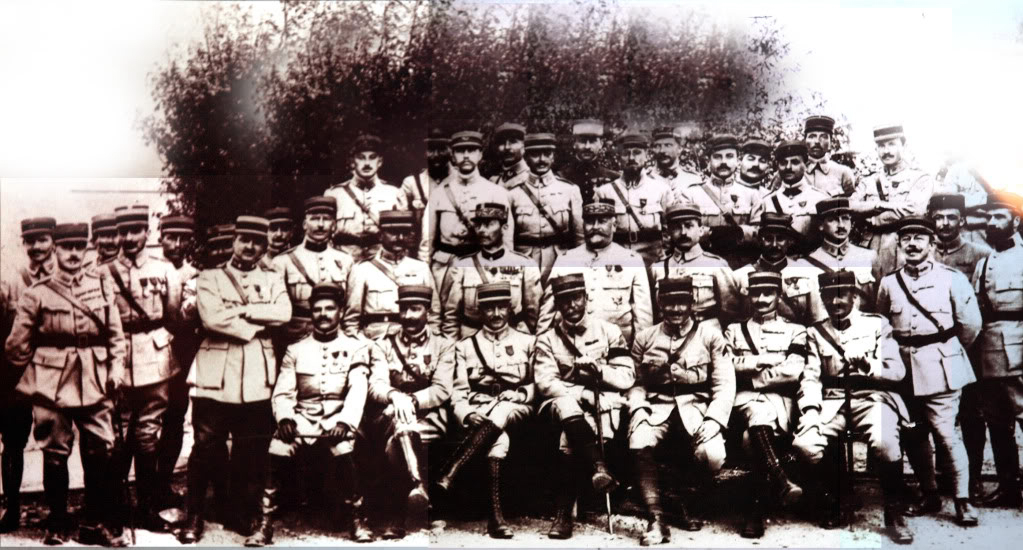 In mid-October 1916, General Henri Berthelot, the head of the French Military Mission in Romania, arrived in Iaşi, where he was received with great pomp.

The purpose of the French Military Mission in Romania (similar missions were also sent to the Russian and Serbian army) was detailed in the “mission order” of September 28, 1916. According to this document, General Berthelot was to represent General George Joffre, the commander-in-chief of the French army in the Romanian Great General Headquarters. He would treat on his behalf “all matters of interest in the ongoing coalition war against the Central Powers and their allies”, to keep the French General Headquarters informed of the material and moral situation of the Romanian army, its ongoing operations and projected military manoeuvres. At the same time, he was to ensure that the necessary liaisons were made between the Romanian High Command and General Maurice Sarrail, the commander-in-chief of the Allied army in Thessaloniki, the French Military Mission in Russia and Stavka. In accordance with this objective, General Berthelot was placed at the disposal of the Romanian High Command as a technical adviser, while the role of the French officers was the subject of an agreement between General Berthelot and the Great General Headquarters. “The role he will play [ed. Berthelot] will essentially depend on the personal situation he will know to create, the tact and the discretion he will use in dealing with the Romanian military authorities”.

Upon arrival in Romania, King Ferdinand and Prime Minister Ion I. Brătianu greeted him- and Brătianu said: “I salute in you the future head of the Great General Headquarters”. Nevertheless, Berthelot is content only with the title of the King’s military adviser, but this unexpected proposal to occupy the highest military function in the Romanian state clearly shows the despair of the Romanian authorities caused by the military defeats in the autumn of 1916.

Romanian Minister I.G. Duca noted in his Memoirs that Berthelot assessed the situation of Romania’s military “with much tact and with care not to bring any offense and with respect towards our justified spiritual suffering”. Almost immediately, the Military Mission began to exert a powerful influence on all levels of the Romanian General Headquarters down to the general staff of units on the frontlines.

Berthelot was a fervent supporter of defending, by any means necessary, the integrity of the Romanian territory, which also was in keeping with his main mission- to ensure that Romania stays on the Allied side, no matter the cost. When the Battle for Bucharest ended in a defeat, Berthelot was accused of having supported a counterattack when the difficult situation of the Romanian troops would have warranted a retreat. Defending the French point of view, Colonel Pétin showed that the head of the Military Mission had supported a counterattack of the Romanians only if the help of the Russians was “considered certain”.

Romania’s existence was threatened by the advance of the Central Powers deep into its territory. The disaster could not be avoided, and Bucharest and a large part of the country would be occupied. The central authorities withdrew to Iași, along with the remains of the Romanian army and hundreds of thousands of refugees. What followed was a winter of despair, but also a spring of national rebirth, to which the efforts of the French Military Mission to restore the Romanian military contingents contributed significantly.

Many of the French that arrived in Romania fought shoulder to shoulder with Romanian soldiers and aviators- in fact, 525 French soldiers and civilians sacrificed their lives on the Romanian front. It was not a collaboration that lacked tense moments or animosities, but the important role of the French Mission in the survival of the Romanian state in those conditions deserves to be remembered. The French Military Mission in Romania was divided into four distinct entities, the Military Mission proper, the Air Force Mission, the Naval Mission and the Sanitary Mission; the latter had an exemplary contribution, along with other Romanian physicians, in stopping the typhus epidemic which ravaged the north of the country in the winter of 1916-1917.

In total, nearly 1.600 French people helped in the reconstruction, endowment and instruction of the Romanian army, which would eventually write some of the most beautiful pages in the history of the Romanian people at Mărăști, Mărășești and Oituz. After the First World War, many of the mission’s members continued to support Romania in the Paris Peace Conference, “opening many doors for Queen Marie and for the Romanian delegation”.