The French military mission vs. typhus. “I was wondering how far the limit of human suffering could be pushed” 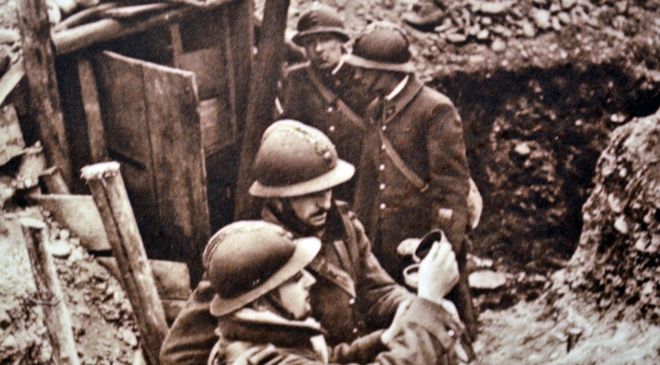 With their territory reduced by half and many of them taking refuge in Iași, the Romanians were confronted in the winter of 1916-1917 with an even more fierce enemy: typhus. This time the French were there to help them, as the French military mission also had considerable medical staff at their disposal. The 80 doctors on hand tried to deal with the typhus outbreak, many of them getting sick too. They also suspected the appearance of cholera and of the plague, which was why they preventively treated the population. This episode is described by Romanian politician Constantin Argetoianu, who also was in Iași.

“By the end of January and by February 1917 the situation had become intolerable. Under the pressure of public opinion and the French Mission- a number of French doctors and charity sisters had already arrived- the leadership woke up from its «deadly slumber» and appointed doctor Cantacuzino (Ion) as head of all sanitary services. Incidentally, I met Cantacuzino in Union Square on the very day of his appointment. He took my arm, he said, “come see something” and took me to Spiridonie. What I saw there surpassed the horror of what I saw at Iași Station. He cracked open the door to a few salons, but an indescribable odour, a stench of rotting and faecal matter carried by the stale air, in which all the effluvia, and so many heated breaths mixed, hit me right across the face and took me aback. It was impossible for me to step into one of these torture rooms, and the momentary terrifying vision through the open door was enough to disturb me deeply. For days on end, I wondered to what extent the strength of human suffering could be pushed. But Cantacuzino had entered where neither the doctors nor the orderlies wanted to enter, and seething with anger and indignation he told me what he had seen. Corpses, lying on the floor for several days that started to decompose, along with the dying and the sick, thrown senseless inside, through the quickly revolving doors- dejections were all over the place, garbs and dirty bandages thrown over the dead and living. Cantacuzino had already began cleaning the place. The orderlies, with rags soaked in phenol covering their noses, had resolved to finish this horrible work, encouraged by the example of their great animator. After 48 hours, the Spiridonie hospital was no longer recognizable.

Cantacuzino’s work was simply miraculous. He knew how to enliven the world. Of course, he was also helped by the French Mission, made up of over 80 doctors. The French sanitary staff was above all praise, even gave us even a saint, Clunet, who gave his life for us in his fight against the epidemic, and a woman saint, Mrs. Goutel, as well fallen and sacrificed to her excess of devotion.

The examples of courage and encouragement, started in the “Cricket villa” near Iaşi, where Clunet lived, struggled and died, also helped to lift the morale of our doctors, who, in their overwhelming majority, did not spare a thought for their lives. It is not exaggerated to say that until Mărășești and Mărăști the doctors were the ones who saved the honour of the country. Our medical corps was heroic, from the beginning to the end of the war and in the long interval between the fighting in Muntenia and the fighting on the Siret, only they were on the front- all the time.

The ravages of typhus had also wound up the nerves of the people as everybody was convinced that we were befallen by every blight imaginable. Every trifle and rumour took on consistency and contributed to further enhance the general nervousness. Just as typhus was starting to subside, thanks to the measures taken under the direction of Cantacuzino, other pestilences were being reported. Typhoid fever, cholera and even plague was reported with all the exaggerations inherent to the moral depression that overtook everyone. In fact, there was no case of cholera and even less of the plague. Typhoid fever did not spread farther than it was natural, in the agglomerations around the cities, especially around Iași. The doctors, however, expected a cholera outbreak and a worsening of typhoid fever, so one day when I had come to eat at the Bacteriological Institute, my friend Slătineanu gave me a double injection against cholera and typhoid fever even though I did not have any craving for that. Both of the plagues had tricked the specialists and there was no outbreak, and I was left with a free injection in the belly.”