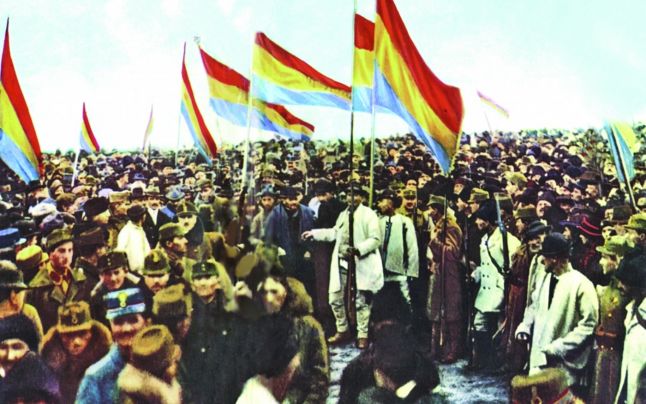 The dismemberment of Austria-Hungary determined the Romanians in Transylvania to organize themselves quickly to decide their own future. Following the failure of the negotiations with the Hungarians in Arad, Romanian representatives decided to convene a Great National Assembly of the Transylvanian Romanians for December 1, 1918 in Alba Iulia.

The Romanian National Council (RNC), the representative body of the Romanians in Transylvania, was inclined to find a modus vivendi with the government in Budapest to avoid bloodshed. In this context, the last negotiations between Romanians and Hungarians took place in Arad on October 13-15. The Hungarian delegation, consisting of 25 people, was headed by Oszkar Jaszi. The Romanian delegation consisted of Ştefan Cicio Pop (president of RNC), Vasile Goldiş and Ioan Erdely, etc. Later, Iuliu Maniu would join the Romanian delegation and, he would tell Jaszi: “The Romanian nation rightly claims full state independence and does not admit that this right will be affected by temporary settlements” and to the Hungarian minister’s question: “What do the Romanians want?”, Maniu responded “total separation”. 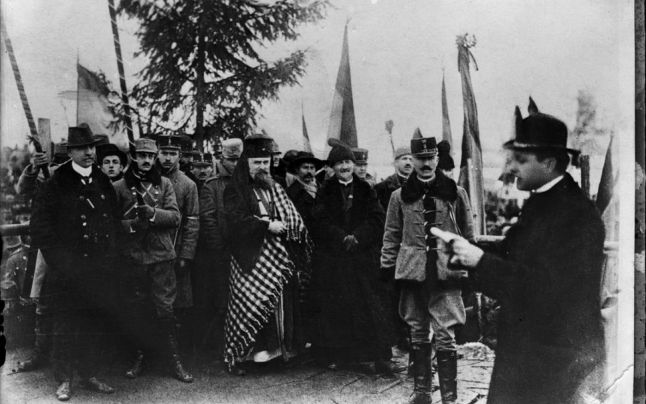 On the same day that the Romanian-Hungarian negotiations failed, on November 15, 1918, the Romanian National Council decided to convene a large National Assembly in Alba-Iulia to decide the fate of the Romanians in Transylvania. The summons was drafted by Vasile Goldiş (1862-1934), the director of the Românul [The Romanian] newspaper, which was outlawed by Budapest in March 1916, but which began to reappear in November 1918. The words of Goldiş’s call are eloquent: “In the name of eternal justice, the Romanian nation has to have its say on its own fate. For this purpose, we convene the National Assembly of the Romanian nation in Alba Iulia, the historic city of the nation, on Sunday, December 1, 1918, at 10 o’clock”.

The choice of Alba Iulia as the place of the Great National Assembly has deep significance for the Romanians. Alba Iulia had been the city of the triumphant entrance of Prince Michael the Brave on November 1, 1599; it had also been the city of the terrifying martyrdom of Horea and Cloșca, broken on the wheel in February 1785. The mobilization of the masses was obviously done first and foremost through the Romanian press of the time: “Come all to the Great National Assembly that will be held on December 1 in the Belgrade of Michael the Brave. Come in the thousands and tens of thousands! Leave your worries at home this day, for on this day we will lay the foundation of a good and happy future for our entire Romanian nation”. And indeed, there were good days before December 1, all the roads and trains were filled with Romanians who came to their nation’s greatest gathering. The trains were adorned with green fir branches and national flags. In addition to the 1228 official delegates from all areas of Transylvania, invested with so-called credentials, a kind of empowerment that allowed them to participate directly in the debates in the Hall of the Union and to vote, there were over one hundred thousand Romanians, many from the neighbouring areas that eventually filled the Roman Plateau near Alba Iulia, the place where the Transylvanian Romanian assembly was to be held. After the services of the two Romanian churches of the city, the delegates gathered in plenary, the meeting being opened by Ştefan Cicio-Pop, president of the Great National Council. Then, the secretariat of the meeting led by Ioan Suciu presented the report of the validation commission, that recognized the presence of the 1228 delegates carrying credentials representing 130 electoral constituencies in 25 counties. Ioan Suciu concluded: “Thus, the National Assembly is able to have its say on crucial matters, so we will now convene.”

Vasile Goldiş read the “Historical Exposition of Reasons”, as well as the “Resolution of the Union of Transylvania with Romania”. After making a harsh indictment of the Habsburg monarchy: “For centuries the Romanian people, the true and legitimate owner of the land that had once been Roman Dacia, was a stranger and a slave to his own ancestral land”. Goldiş proposed: “The National Assembly of all the Romanians from Transylvania, Banat and Hungary gathered their rightful representatives in Alba Iulia on December 1, 1918 and decreed the unification of those Romanians and all the territories related to them with Romania. The National Assembly proclaims in particular the inalienable right of the Romanian nation to the entire Banat between the rivers Mureş, Tisa and the Danube”.

Thereafter, the ruling formulated a series of provisions designed to ensure the individuality of these territories in the transition phase towards institutional consolidation. Even today, the provisions of the resolution capture their profound democratic character and their modern perspective, now accepted everywhere in the civilized world. Thus, in paragraph 3, line 1, it ensured: “Full national freedom for all cohabiting peoples. Every nation will be educated, administered and judged in its own language by individuals from their own ranks, and each people will receive the right to represent themselves in the legislative bodies and government of the country, in proportion to the number of individuals that make it up”. Line 3 provided guarantees for a “clean democratic regime” based on “the common, equal, secret, communal vote, in a proportionate way for both genders, aged 21, representing the communes, counties or parliament”. The latter desire on the vote of women will, however, wait for another 20 years to be put into practice. Line 4 provided: “Perfect freedom of the press, association and assembly; free propaganda of all human thoughts.” At point 5 “radical agrarian reform” and at 6 “to the industrial workers, the same rights and advantages that are regulated in the most advanced industrial states in the West”.

The approval of the unification with Romania

After reading the “Goldiş resolution”, Iuliu Maniu is given the word, as representative of the Romanian National Party. After a moment full of excitement and silence, the representatives of the two Romanian, Orthodox and United Church churches stand up and give the tone to the applause and ovation. It was a spontaneous and unanimous acknowledgment of the work made by Iuliu Maniu as the head of the national revolution. “At that moment when the unanimity of the acclamations as he was nominated as the head of the Romanian people on the territory of Hungary, and while the Assembly of Alba Iulia voted the resolution of the Union with Romania, the struggle that was started by Inocențiu Micu finally ended. The history of the Romanians is entering a new phase”. After his speech, Gh. Pop de Băseşti consulted the Assembly if it wished to vote on the resolution proposed by Goldiş on points or in its entirety. The unanimity of those present has called for the whole document to be voted on. “Is the Honorable Assembly in agreement with the Resolution?” A thunder of acclamations erupted in unanimous approvals: “We want a single Romania, of all the Romanians!” The echo of the acclamations in the hall reverberated outside the hall in the cheers of the tens of thousands of Romanians living in Banat and the Hungarian Plain that received the Resolution presented by Vasile Goldiş (1918-1954), in the entirety of the field beside the Military Circle.