The Great Powers and Bolshevik Hungary 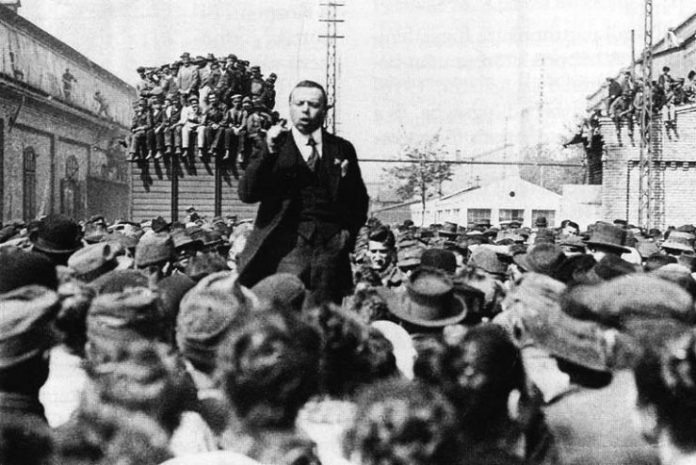 On March 23, 1919, an unexpected news raised serious concerns in Paris. The knowledge that a totally unknown Bolshevik took power in Budapest dismayed the Great Powers present at the Paris Peace Conference. Suddenly, Bolshevism had taken a giant step towards Western Europe. Germany and Austria could now be directly infected with the virus of Bolshevism.

Winston Churchill, Secretary of War of the United Kingdom during the Paris Peace Conference said that: “[…] Civilization is being completely extinguished over gigantic areas, while the Bolsheviks hop and caper like troops of ferocious baboons amid the ruins of cities and the corpses of their victims”.

Churchill was one of the few who understood that Lenin’s bolshevism was a new phenomenon on the political scene, and that behind the Marxist rhetoric, there was a particularly disciplined and centralized party, which sought total control. “The essence of Bolshevism, as opposed to many other forms of visionary political thought, is that it can only be propagated and maintained by violence”. Churchill also added that: “Of all the forms of tyranny in history, Bolshevik tyranny is the worst, destructive and degrading”. Arthur Balfour, the British Foreign Minister, took a jab at Churchill, saying that: “I admire your exaggerated way of telling the truth”. With the expansion of Bolshevism in Hungary, Churchill was proven right in his assessment of the threat posed by Bolshevism to the whole of Europe.

Béla Kun, however, conveyed contradictory messages, sending communiques of encouragement to allied leaders, but also “brotherly greetings to the Western working class”. What was really worrying was that Béla Kun had publicly asked Lenin for a treaty. Perhaps the two Bolshevik states could have laid the foundations for a treaty to claim the disputed territories on the borders of Poland, Czechoslovakia, Romania and beyond.

Ever since the end of the First World War, the French looked at the Hungarians with suspicion. In a meeting between Hungarian Prime Minister Mihály Károlyi and the French general Louis Franchet d’Esperey, held in Belgrade at the end of November 1918, the latter warned Károlyi: “I know your history. In your country you persecuted all those who were not Hungarians. Now the Czechs, Slovaks, Romanians and Yugoslavs are your enemies; I hold these nations in the back of my hand; I only need to signal them to have them destroy you”. In the beginning of 1919, the Hungarians could accept the loss of Croatia, even the loss of Slovakia if that meant getting better borders, but their position concerning Transylvania remained unchanged.

Romanians, the majority in Transylvania even according to Hungarian censuses

In front of the Supreme Council of the Paris Peace Conference, Romanian Prime Minister Ionel Brătianu was extremely clear-cut with regard to Transylvania: “On this territory the Romanian nation was formed; for centuries, this people aspired to nothing but the political union with this region; Transylvania was promised to Romania by the Treaty of Bucharest in 1916 when it entered the war”.

However, Brătianu had a better argument, in the form of Hungarian statistics. Even though they were often falsified, reducing the number of Romanians in Transylvania, Hungarians only accounted for 23% of the population, while Romanians accounted for more than half of the population of Transylvania, with Germans and other minorities making up the rest. On December 1, 1918, Romanians from all over Transylvania voiced their desire, through their representatives at the Great National Assembly in Alba Iulia, to join with Romania. The Germans of Transylvania also supported the union with Romania, but the Hungarians remained unflinching in their opposition. Brătianu promised that the Hungarian minority in Transylvania would be treated in accordance to liberal policies.

When Kun’s regime was installed in Hungary, the Supreme Council in Paris had already decided to support the vast majority of Romania’s claims.