The Great Powers and Hungary at the Paris Peace Conference 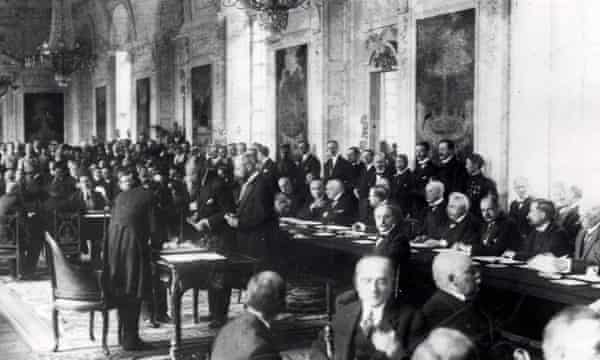 The Allies considered Hungary ready to sign the peace at the end of 1919. Thus, they invited the representatives of its government to Paris for final discussions before the conclusion of the peace treaty.

The French greeted the Hungarians coldly but cordially, and escorted them to the Château de Madrid, a hotel with thermal waters in the Bois de Boulogne. They were treated better than the Germans. They were allowed to walk through the forest and even dine at restaurants in the area. The peace treaty was handed over to the Hungarian delegation on January 15th, 1920 in a short ceremony at the Quai d’Orsay. Clemenceau briefly and thoroughly informed the leader of the Hungarian delegation, Albert Apponyi, that he could make a statement the next day, but he did not have the right to negotiate orally, but only to submit written appeals.

The next day, Apponyi delivered his speech before the Supreme Council and highlighted the main issues that bothered the Hungarian side: Hungary was punished more severely than all of the other defeated nations; it lost two-thirds of its territory and its population was deprived of markets and sources of raw materials and was required to pay a disproportionate amount of the reparations; three and a half million Hungarians were to live outside the borders of the new state; if the principle of self-determination was correct, then it had to be applied to Hungary as well; plebiscites were to be held in the territories lost by Hungary. However, he made a statement that would shock those present: he claimed that Hungarians were condemned to live under the heel of inferior civilizations, referring to Romanians, Czechoslovaks and Yugoslavs.

On February 12th, almost a month later, the Hungarian delegation presented in detail its main objections to the borders drawn by the Allies. The Hungarian side protested that “a territory that had been a political entity for ten centuries because nature had predestined it to be so” was being altered. The result of the ruin of Hungary, the Hungarians claimed, will be the emergence of states, which will also be as diverse, but lacking any kind of “organic unity”. The borders were “arbitrarily drawn, separating industrial districts from agricultural ones and thus aggravating the conditions of productive work” and “the characteristic feature will be the transfer of the inevitable national hegemony to the races with a lower degree of civilization”.

The new Hungarian state was ready and offered “its non-Hungarian citizens a wide cultural and even territorial autonomy”. The Hungarians also claimed that almost “1.800.000 Hungarians, although living in the vicinity of the country’s new borders, were to be torn from it and handed over to hostile foreign forces”. They also demanded that the territory of the Szeklers be linked to Hungary through a mixed-population corridor, in the hope that “Cluj with its old Hungarian cultural institutions” would be saved, as well as many other such proposals.

In mid-March, the Hungarian side tried to revitalize the idea of ​​creating a “Danubian Economic Confederation” in order to try to preserve as many of the territories that were part of “millennial Hungary” as possible. None of the minorities that Hungarian politicians oppressed, even in the early twentieth century, wanted to hear of such a thing.

“The Allies could not accept the Hungarian point of view”

In a letter dated May 6th, 1920, drawn up by the General Secretariat of the Conference of Ambassadors, the Allied and Associated Powers stated that they: “were motivated by a sincere desire to make decisions in accordance with justice and the superior interests they promote”. If those decisions were not in line with the main counter-proposals made by the Hungarian delegation, it was due to the fact that “the Allies could not accept the Hungarian point of view”. Hungary’s responsibility for starting the war was emphasized, the actions before the beginning of the conflagration, especially the annexation of Bosnia and Herzegovina. The change of borders was rejected, as “the Allied and Associated Powers are convinced that any change in the fixed borders would lead to even more unpleasant problems than those denounced by the Hungarian delegation”. The Allied and Associated Powers called on Hungary to sign the Peace Treaty “as soon as possible”. The final terms of the peace were similar to those approved by the Supreme Council in May 1919.