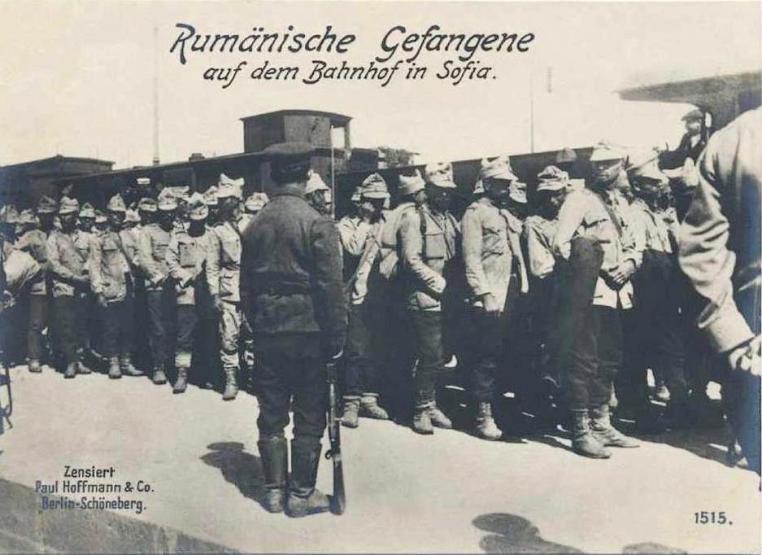 During the First World War, 21.187 Romanian soldiers were taken prisoner by Bulgarian troops. Captured in 1916, during the battles in Dobruja and during the Battle for Bucharest, these Romanian prisoners had to endure a harsh detention regime, and almost a quarter died during captivity.

Romanian prisoners of war were interned in camps such as those in Razgrad, Tulov, Radomir, Kirdjali or Pirin-Planina, where they endured countless hardships, from hunger and cold, to forced labour and the absence of medical care. The ordeal of the Romanian prisoners in Bulgaria was well documented in official reports, accounts and testimonies, published after the war’s end.

In a report addressed to the Directorate of Execution of Treaties of the Ministry of Foreign Affairs, reserve lieutenant Ionescu N. Hristodor recalls his experiences:

“I took part in the Campaign of 1916 as a reserve lieutenant in the 2nd Border Guard Regiment. In the battles of Turtucaia I was taken prisoner by Bulgarian troops (August 24, 1916). Moved between the Razgrad, Tulov and Kirdjali camps I suffered the most painful deprivations of food, water and even air, sometimes. But the suffering, which still bares heavily down on us and will no doubt condemn us to an untimely death, reached the peak in the very first winter of our captivity, when besides the physical torment and the material damages, we had to suffer heavy moral prejudices.

In November, 1916 I was transferred out of the Kirdjali camp and taken, with a group of about one hundred officers, farther south in the Rhodope Mountains, near a Turkish village, Seremetli. Here, with all our opposition and under the penalty of hunger and under the threat of execution, we were put to work in the mountains where we had to smash boulders. And, almost naked- only in a vest and pants, I went up and down to the place of our shame, where in the fever of disease, pierced by the icy cold of winter, I was forced with the bayonet, to descend the mountainsides with the tarpaulin chock-full with stone boulders ripped from the mountain or to smash with a sledgehammer boulders on the side of the road […]”.

The poet George Topârceanu was also among the Romanian prisoners in Bulgaria, and he recorded his experience in a volume published after the end of the conflict:

“There, isolated on the top of the mountain, we could die of hunger, but at least we had a mild climate and clean grass underfoot- it was not cold, there was no sleet, there was no knee deep mud as in that sinister quagmire called the camp at Nadejda Railway Station in Sofia.”

Over 22% of all Romanian prisoners in Bulgaria died during detention

From the analysis carried out by the Statistics Department of the Romanian Ministry of War, it turns out that the number of Romanian prisoners which died Bulgarian camps amounted to 4.696 (25 officers and 4671 soldiers), which represents a percentage of over 22% of the total of 21.187. However, the percentage could be misleading as many other former Romanian prisoners in Bulgaria died after their return, as a result of the diseases, deprivations and traumas suffered during the captivity.

The repatriation of Romanian prisoners from Bulgaria started in 1918, on the basis of a convention that stipulated the mutual obligation to repatriate prisoners, concluded on March 23, 1918, between Romania and the Central Powers. The convention was further strengthened by the Peace Treaty of Buftea-Bucharest (April 24/ May 7, 1918).

Teofil Oroian, Calvarul prizonierilor români în Bulgaria [The ordeal of Romanian prisoners in Bulgaria], in the Historia magazine, no. 50, February 2006.