The Hungarian Communist Revolution of 1919: The establishment of the first Bolshevik regime outside of Russia 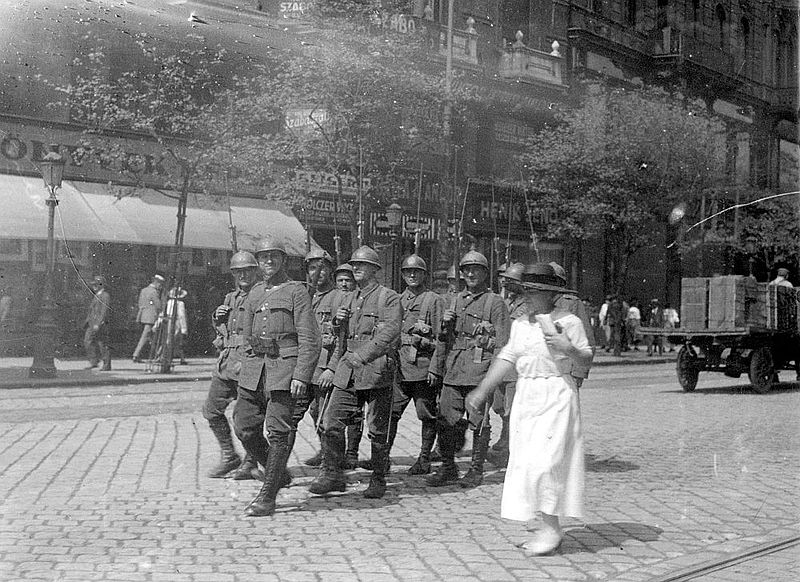 The Hungarian communists did not enjoy popular sympathy in early 1919, but this would change after their leaders were detained by the police, and the party secretary, Béla Kun, was beaten in custody. The inability of Budapest’s Berinkey government to gain the support of the great powers, as well as Hungary’s economic difficulties, made it vulnerable to communist attack. The resignation of the cabinet on March 21, 1919 led to the establishment of the first communist regime outside Russia.

On February 20, a protest organized by the communists in front of the headquarters of the Socialist newspaper Népszava degenerated into violent confrontations between demonstrators and the police. In the following days, 48 ​​communist leaders were arrested, including Béla Kun, and the party headquarters and printing houses were seized by the police. At that moment, the authorities’ action enjoyed popular support, but that quickly changed after Béla Kun was brutally beaten in custody and the rumour that he had died spread around the city. When it reached György Páll and Béla Szentkirályi, two police chiefs in Budapest, they went to see what had happened. The two were accompanied by a journalist, Vilmos Tarján. When they reached the penitentiary, the three found Béla Kun at the infirmary. While he told them what had happened, several police officers came into the infirmary, led by the brother of one who died during the revolt in front of the headquarters of the Népszava newspaper, and began to hit Kun with the rifle beds, under the eyes of the police chiefs. Páll and Szentkirályi were able to stop them and take them out of the infirmary. The next day, Vilmos Tarján published an article describing what happened in police custody, a story that attracted popular sympathy for the communists.

The shift to Bolshevik Russia

By the end of February, however, it was clear that the great powers ignored the requests for help from Budapest. Consequently, the Hungarians began to orient eastwards, seeking to obtain Russia’s help. The first measures in this regard were taken by Károlyi’s regime. On February 22, the government promulgated a law against those who “threatened the realization of the revolution”. As a result of this law, directed against right-wing reactionaries, about 100 generals, magnates and Catholics bishops were put under house arrest.

The government’s situation was worsened as Romanian troops started their advance in Transylvania, reaching the Sighet-Zalău-Sebeş line by mid-February. In an attempt to stop the Romanians, Budapest sent 5.000 soldiers to Transylvania. Although Hungary did not participate in the Paris Peace Conference, the rumours of the talks in the French capital reached Budapest and were not likely to calm the fears of the Hungarians. As it became increasingly obvious that Transylvania was to be totally ceded to Romania, Budapest began to reconsider the need to reorganize the army.

In public speeches and discussions, Károlyi made it very clear that Hungary was going to oppose any decisions taken in Paris if these decisions would lead to territorial losses. By mid-March, rumour spread that Károlyi was prepared to announce publicly the orientation of Hungary’s foreign policy towards Soviet Russia.

On March 19, Lieutenant Colonel Fernand Vix, the head of the Entente Military Mission in Budapest, was instructed to tell Károlyi the decision taken at the Paris Peace Conference nearly a month earlier (February 26) by which the Hungarian troops had to withdraw from Transylvania behind a new line of demarcation between Satu-Mare and Arad. The judgment, known as the “Vix Memorandum”, was communicated as an ultimative note, leaving the Hungarian government 48 hours to answer.

The “Vix Memorandum” triggered a real political storm in Budapest. The Berinkey government refused to accept the ultimatum, preferring to resign on March 21st. The last government decision before his resignation was the release of Béla Kun and of the other communist leaders from prison.

The first communist regime outside Russia

On the evening of March 21, before the Workers Council in Budapest, socialist leader Sándor Garbai announced that the Socialist Party and the Communist Party had merged, with the new political party ready to take over power. That same evening, faced with a coup d’état, Mihály Károlyi agreed to resign, and Béla Kun met with the socialist leaders to form a revolutionary government to lead the newly proclaimed Hungarian Republic of Councils, the first communist state in Europe, constituted after the Russian Revolution in October. Garbai also held the post of president and prime minister. The external orientation of the new regime was clear, as Béla Kun was named as foreign affairs commissioner.

The next day, the new government launched a public manifesto stating that Hungary “can be saved from the collapse and anarchy only through socialism and communism”. The new regime promised to organize a “huge army of proletarians” to “strengthen the dictatorship [of the proletariat] against the Hungarian capitalists and magnates, the Romanian boyars and the Czech bourgeoisie”. With regard to foreign policy, the new government declares “complete ideological unity” with the Soviet government.

This manifesto was a mixture of Marxist internationalism and nationalism, and the new regime in Budapest managed to attract the support of those Hungarians who had no communist sympathy at all. Most of the Hungarians preferred to accept Bolshevism instead of the “Vix Memorandum”. Although Hungary was the first country outside Russia where a communist regime was established, this ideology did not have deep roots among the Hungarians. As the contemporaries wrote, the Hungarians embraced communism from despair and fear that their country could be divided among their neighbours, like Poland beforehand in the eighteenth century.

Although he held the post of commissioner for foreign affairs, Béla Kun was the de facto leader of the regime. Like Károlyi before him, Béla Kun was recognized as a leader because of his role in the foreign policy of the Hungarian state. In the autumn of 1918, Károlyi was considered the most appropriate leader to try and get the sympathy of the Entente, given his pacifist attitude manifested during the war. In the spring of 1919, Béla Kun, Lenin’s protege, was the most appropriate leader to get Soviet support. However, the new regime did not change the main objective of Hungary, namely the preservation of territorial integrity.

The support of those who had hoped the new regime could save Hungary disappeared rather quickly. In the 133 days that the communist regime led Hungary, it announced a series of reforms that attracted the antipathy of almost all social categories, from the abolition of all noble titles, the nationalization of factories and plants, the division of the great estates, to the prohibition of alcohol marketing, turning churches into cinemas and introducing sex education classes for students. However, the loss of popular support was caused by the inability of the regime to manage famine and inflation, with the final blow for the Hungarian Bolshevik regime being the intervention of the Romanian army.

Peter Pastor, Hungary between Wilson and Lenin: the Hungarian revolution of 1918-1919 and the Big Three, Columbia University Press, New York, 1976.