The hunger in Romania between 1917 and 1918: “There is a great lack of food. The Germans take and take every day. Whole trains are heading day and night towards Germany” 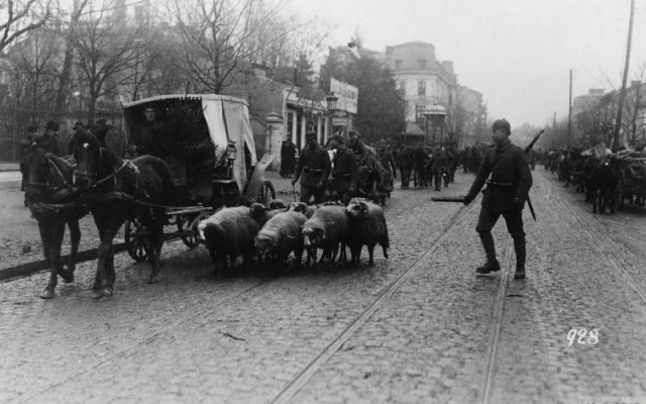 The image of Romania during the German occupation is that of dying country. Bread was the basic food during the occupation for most of the urban population, but it was forbidden to sell it to the villages, being replaced with rations of 500 grams of hominy per person. By the end of the occupation period, bread was supposed to be replaced by biscuits, but the price of 20 lei per kilogram was too high for any ordinary man.

They’re also requisitioning a share of the chicken eggs, as if all the eggs are made daily. The hens were counted, and each one had a leg ring with their number written in a catalog. Today they came to pick up 20 eggs. Fortunately, we prepared them in the morning, placing between them ten from our hens and ten from our neighbors. As if they know which are mine, because they put them all together in a basket. How conscientious are the Germans and what things they can think of! The poor hens, bewildered, do nothing but peck on their leg.

That is why we are also resorting to fraud to have the right to cut a hen. Thus, a dead one was passed from house to house and taken to command. I too borrowed it and I put it in the hen house when the night came. In the morning I took the opportunity that the orderly of the German was in the courtyard so that Iordache could open the hen house in front of him and in my presence to pick up the eggs. We were all surprised to find it dead. I asked him to take it to command, not knowing where its death had to be recorded.

We decided to stop the action, so they wouldn’t notice that it was the same hen. I signed for 16 chickens because six of them were hidden in the attic, so we had to resort to frauds in order to eat seven hens.

Yesterday, when I was at the command office to ask whether I had received anymore letters from the country, for a number of them had already arrived, a woman came in with 14 eggs. A commissioner took them and, as they were still fresh, three of them broke. «Hey, hey, – exclaims the German-, alle sind caput». The woman, who knew they were fresh, revolted and addressing me, she said, “Woe to me, madam, how could they be rotten if they are only three days old?”. Saddened to see how the pauper has his food taken from his mouth, I nonetheless laughed. At home I told what had happened and everyone laughed about it”.