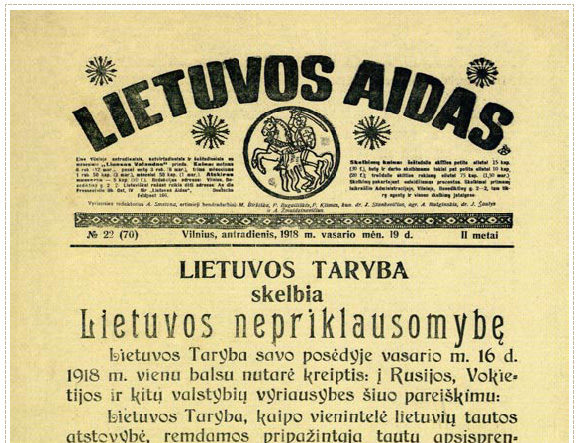 The outcome of the First World War created the preconditions for Lithuania, still suffering from German occupation, to reach the long-term goal of the nation: restore an independent state. In 1917, over 200 delegates convened for the Vilnius Conference and adopted a resolution first stating the objective to make Lithuania an independent state. The Council of Lithuania consisting of 20 elected members was charged to reach the objective. On 16 February 1918, the members of the Council signed, which was chaired by Jonas Basanavičius, the Act of Independence of Lithuania. 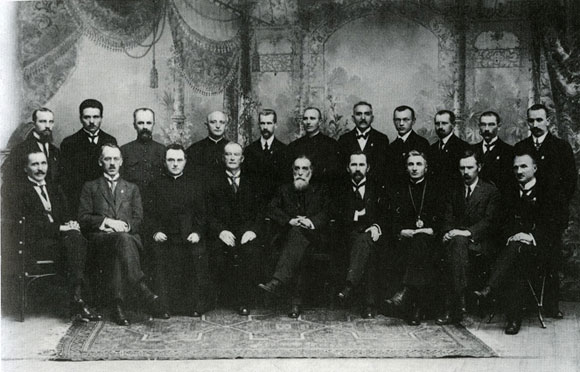 The Council of Lithuania in its session of February 16, 1918 decided unanimously to address the governments of Russia, Germany, and other states with the following declaration:

The Council of Lithuania, as the sole representative of the Lithuanian nation, based on the recognized right to national self-determination, and on the Vilnius Conference’s resolution of September 18–23, 1917, proclaims the restoration of the independent state of Lithuania, founded on democratic principles, with Vilnius as its capital, and declares the termination of all state ties which formerly bound this State to other nations.

The Council of Lithuania also declares that the foundation of the Lithuanian State and its relations with other countries will be finally determined by the Constituent Assembly, to be convoked as soon as possible, elected democratically by all its inhabitants.” 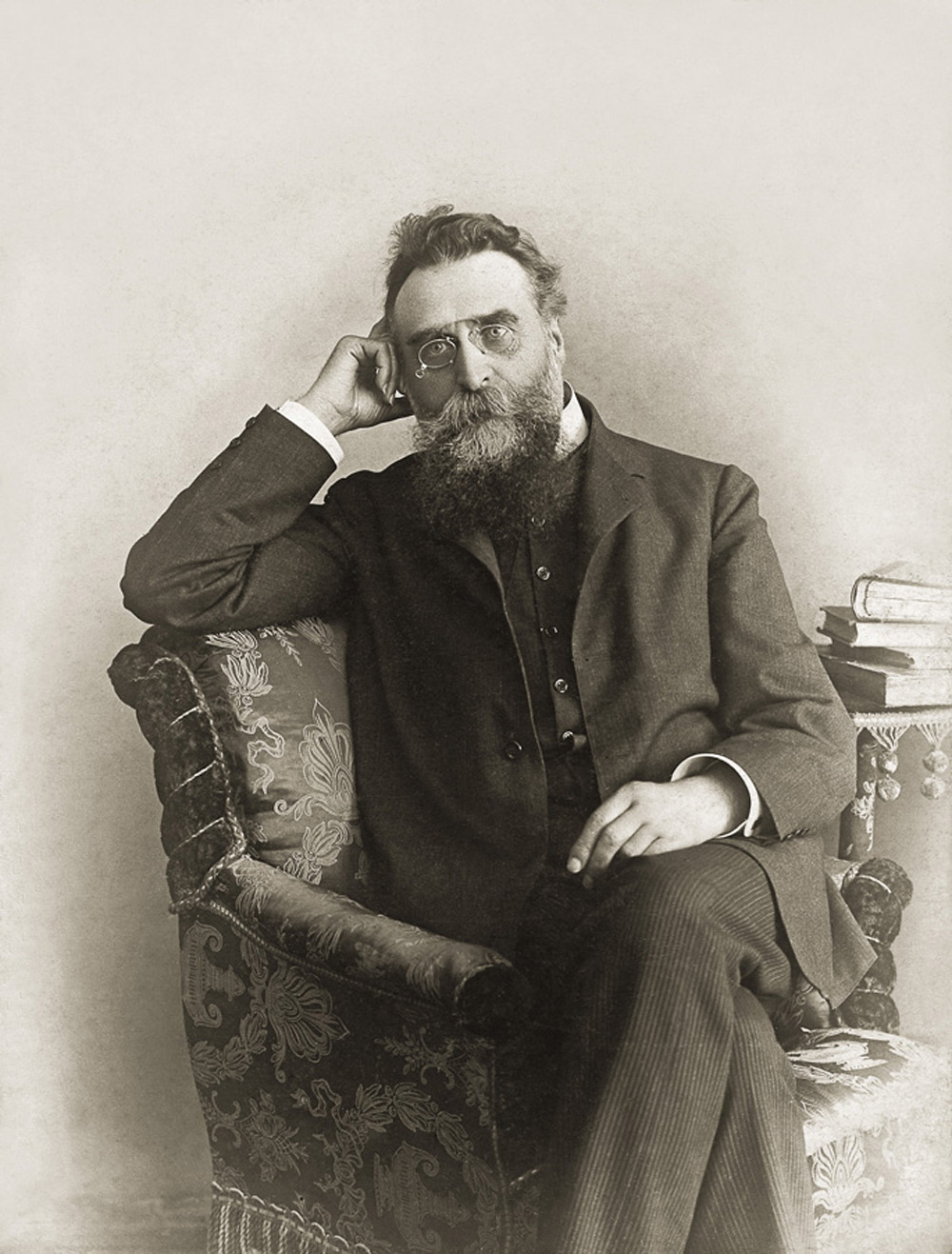 The Council had to carefully maneuver between the Germans, whose troops were present in Lithuania, and the demands of the Lithuanian people. The immediate effects of the announcement of Lithuania’s re-establishment of independence were limited. Publication of the Act was prohibited by the German authorities, and the text was distributed and printed illegally. The work of the Council was hindered, and Germans remained in control over Lithuania. The situation changed only when Germany lost World War I in the fall of 1918. In November 1918 the first Cabinet of Lithuania was formed, and the Council of Lithuania gained control over the territory of Lithuania. Independent Lithuania, although it would soon be battling the Wars of Independence, became a reality. 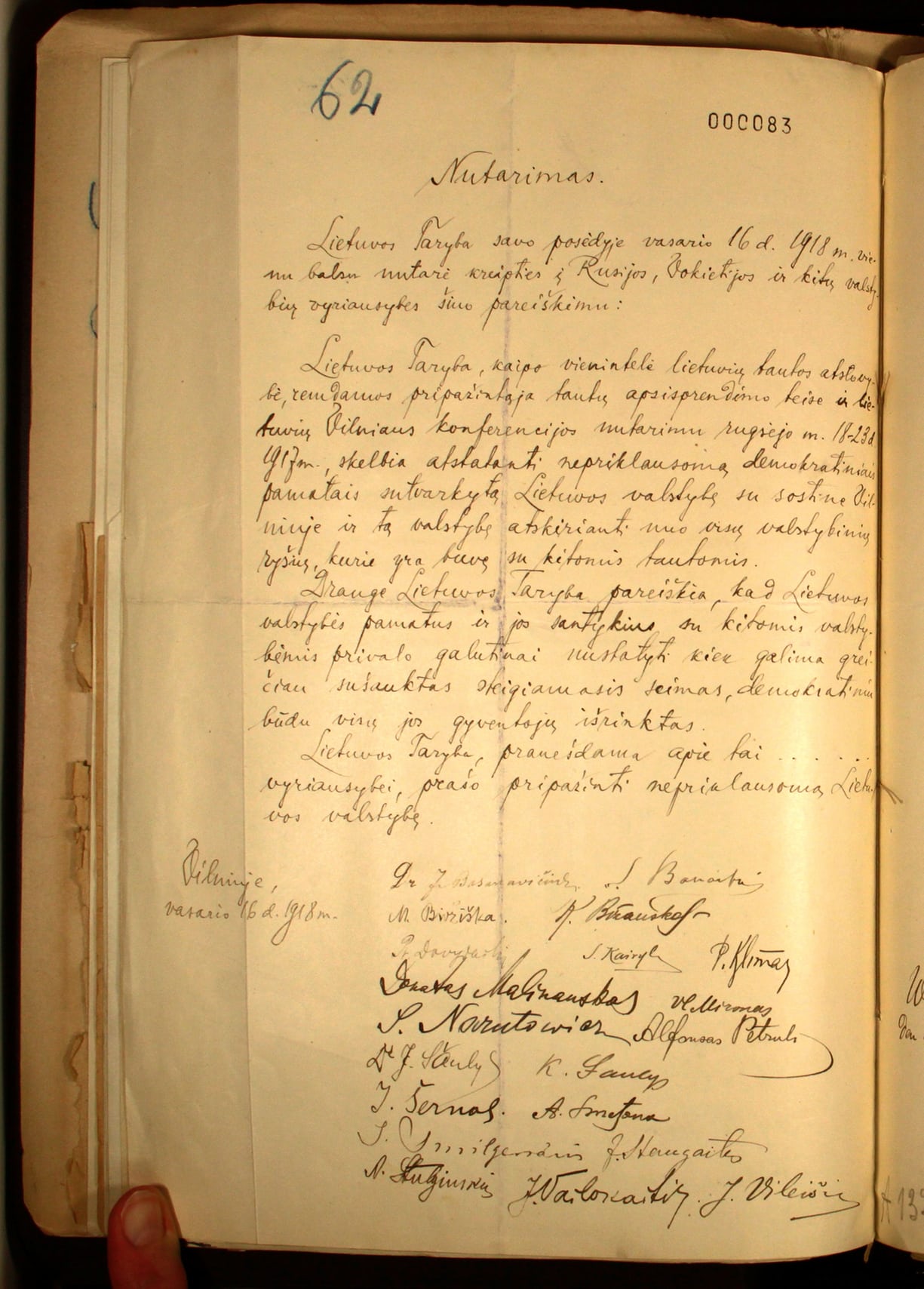 This document has a very interesting story. Lithuania had lost track of all copies of the independence declaration, signed on 16 February 1918, in the turmoil that engulfed the region after the end of the first world war. The Lithuanian state was announced with the approval of Germany, whose army controlled the territory at the time, following a successful offensive against the Russian empire in 1915.

Last year after 99 years, a copy of Lithuania’s lost declaration of independence, drawn up in 1918, has been discovered languishing in a German archive, and hailed by Lithuanian authorities as the discovery of the nation’s “birth certificate”.