The July Crisis: who led Europe towards war? 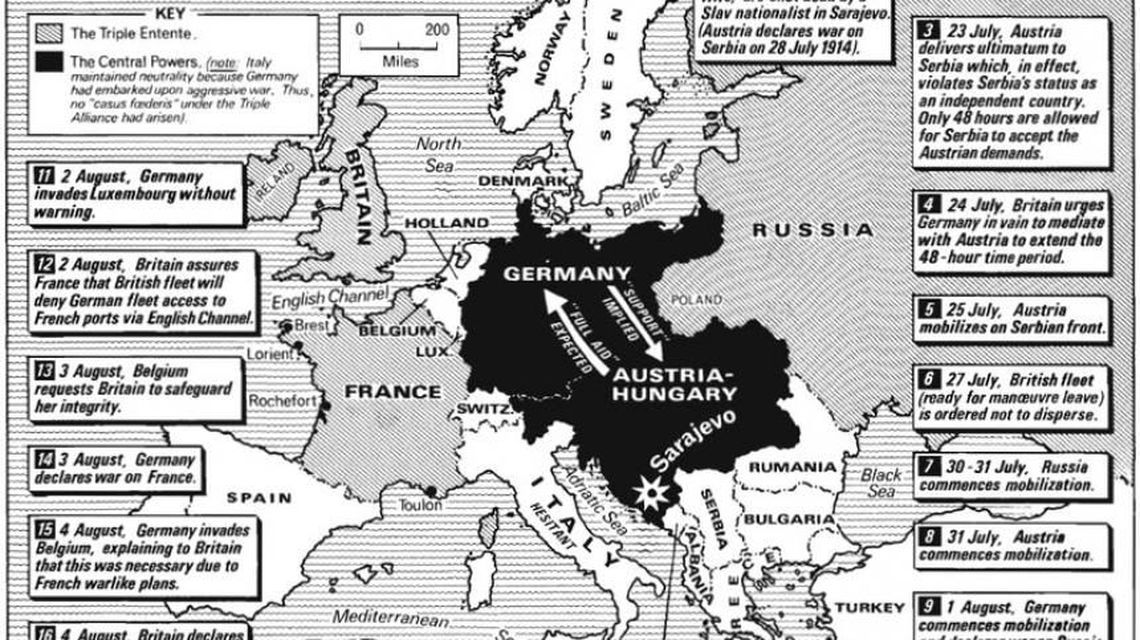 The assassination of Archduke Franz Ferdinand, on June 28th1914, didn’t necessarily have to become a cassus belli for the European war. However, the improper manner in which the Balkan crisis was handled transformed what could have been a local conflict, between Serbia and Austria-Hungary, into an international war. Between the day of the assassination and the day the war officially begins, a month later, the European countries witnessed an important diplomatic crisis between the Great Powers, known as the July Crisis. The intense diplomatic activity couldn’t avoid the conflict;it was, however, to be expected, since some of the participants wanted a war. Let us find out who were the involved in this July Crisis.

Troubled by the assassination of Franz Ferdinand, Wilhelm II supported from the beginning the idea of punishing Serbia, even through a war – as long as the conflict was maintained in the Balkan borders! Despite the image his post-war critics have built him, of a blood-thirsty emperor, Wilhelm never wished for a general war and, knowing the Austro-Hungarians’ excesses could lead to war, tried to temper his Allies. However, he was confronted with the determination of his own advisers, who believed a European war could benefit Germany.

Despite the Russian-Serbian alliance and the close relationship between the two countries, the Russian Tsar didn’t want to start a war over the assassination of the Austrian heir apparent, knowing that at the time, in the summer of 1914, his country was not prepared for a war against Germany. A weak leader, Nicholas will end up giving in to his advisers, who favoured Russia’s involvement in the Balkan conflict.

On a personal level, the assassination of Franz Ferdinand didn’t mean that much for the old Austrian emperor. It was, however, extremely important for the prestige of his Empire. Therefore, Franz Joseph could only favour a firm decision against Serbia. The emperor wasn’t personally involved in the diplomatic exchanges of July 1914, leaving it to be handled by his foreign minister, Berchtold. When he found out of the severity of the ultimatum that was to be presented to Serbia, Franz Joseph supported Berchtold’s decision, thus commending the conflict’s escalation into war.

German Chancellor Bethmann-Hollweg played a fundamental role in the clarification of the German-Austrian relations in the days following the Sarajevo assassination. He ensured his allies of the firm support Germany was willing to give in regard to the ‘Serbian problem’. Realising the local war would eventually gain proportions and turn into a European one, through Russia’s involvement, the Chancellor didn’t back down as he was convinced that Germany was meant to fight Russia. He only started having doubts the moment he realised the British would enter the war against them, supporting Russia and France.

Count Berchtold was one of the most important Austro-Hungarian officials determined to take firm action against Serbia, even if that meant going to war against the Russian Empire. Cautious at first, after securing Germany’s promise to help, Berchtold insisted that the ultimatum to Serbia be an extremely harsh one, so that the Serbians simply couldn’t accept it, thus giving Vienna a reason to start a war.

The Russian Foreign Minister didn’t persuade the Tsar to offer Serbia a firm promise of help, but once the conflict against Germany and Austria-Hungary became more than just a possibility, Sazonov argued that his country must not avoid the war. After the Tsar pulls back on his first mobilisation order, replacing it with a partial mobilisation one, Sazonov will be the one to convince Nicholas to rethink his decision. The general mobilisation of the Russian army will be the gesture that determines Germany to declare war on Russia.

Like the Emperor, the German foreign minister at first believed that Austria-Hungary’s conflict with Serbia wouldn’t transcend the Balkan borders. He believed that Russia wasn’t prepared for a European war and that she wouldn’t intervene, thus containing the conflict to its initial frontiers. Throughout the July Crisis, Jagow did everything in his power to maintain (particularly towards the British) Germany’s image as a country who doesn’t want to go to war. The German minister believed his country was in an opportune moment in which she could successfully fight a war against Russia, whom she was destined to clash with. He argued that, in only a few years time, Germany could no longer fight a war against Russia, who would be able to crush them due to her strength.

8.       Franz Conrad von Hötzendorf, Chief of the General Staff of the Austro-Hungarian Army and Navy

As a military, Conrad von Hötzendorf was the main supporter of the war against Serbia, even before the Archduke’s assassination. He was determined to protect the image and prestige of his country and, after the Kaiser promises to assist Austria-Hungary in her actions against Serbia, he will repeatedly ask for a firm action against the Balkan nation.

As minister of war, Falkenhayn played an important role in defining Germany’s policy during the July Crisis. As part of the German military establishment, he believed Germany was prepared to go to war against Russia and that the government should not miss this opportunity. On July 29th, together with Moltke, he asked that Germany profit from Russia’s partial mobilisation to start the war.

Since the Crisis’ outset, Moltke supported the idea of Germany assisting Austria-Hungary in the war against Serbia, as an excuse to initiate a war against Russia. Like many others, he believed the Russian-German confrontation was inevitable. However, he knew that the German war plan was directed primarily against France. As such, in the days before war was declared, he told the Kaiser the Schlieffen plan could simply not be changed and that the German war machinery, once put in motion against France, could not be stopped.

Hungarian prime-minister Tisza was one of the few people in the Austro-Hungarian administration who opposed the idea of going to war against Serbia. He was also against drawing up a harsh ultimatum as a pretext for the war, knowing that Russia will intervene, thus turning the local conflict into a European one. Tisza insisted Serbia be given the opportunity to present her official stand on the assassination and that the government in Vienna wait for the investigation’s conclusions before acting. In the end, Tisza will give in and accept Vienna’s view, that the war cannot be – and shouldn’t be – avoided.

As Berchtold’s chef de cabinet, count Alexander von Hoyos was one of the most zealous supporters of punishing Serbia. He was sent to Berlin on June 4thto discuss Germany’s position regarding the problem and he receivedBethmann-Hollweg’s promise of unconditional support.

Arthur Zimmermann’s name is mostly associated with the telegram that bears his name (which led to the USA’s declaration of war against Germany). However, this State Secretary also played an important role during the July Crisis. According to him, the reason for which Germany decided to support Austria-Hungary was to avoid the neighbouring empire’s disintegration, which would have caused problems for Germany. On the other hand, Zimmermann seriously doubted the Viennese administration’s ability to take any firm action in the matter.

The German ambassador to Great Britain, princeLichnowsky, was the only German diplomat who opposed his country’s involvement in the Serbia – Austria-Hungary conflict, believing that the British, Germany’s most dangerous enemy, wouldn’t remain neutral. In the last days of the July Crisis, Lichnowsky made real efforts to persuade his government in Berlin to accept the mediation offer made by the British. His warnings regarding the disastrous path the war would take were ignored.

At the start of the July Crisis, CountTschirschky tried to temper the Austrians. However, after his government decides to support Austria-Hungary in the Serbian problem, Tschirschky will collaborate closely with Berchtold to coordinate the diplomatic action against Serbia. He told the Austro-Hungarian foreign minister that a gesture of compromise from Vienna would be seen in Berlin as a sign of weakness and would damage the German-Austrian alliance.

The British ambassador in Berlin, Sir Edward Goschen, was involved in London’s efforts to mediate the Balkan conflict. In the days before war was finally declared, he met with German officials on several occasions, including with Bethmann Hollweg. The German Chancellor first told him Germany was making efforts to prevent Vienna from going to war;soon after, he tried to obtain from Goschen a reassurance that Great Britain would remain neutral if a conflict were to arise between France, Russia and Germany (he also promised that, if that were the case, Germany would not annex French metropolitan territories). Even more, over the course of the same meeting, the Chancellor hinted to Goschen that Germany might violate the Belgian neutrality. On August 4th, Goschen was the one who conveyed to von Jagow the British ultimatum (regarding Belgium’s neutrality). Confronted with the German’s refusal, Goshen asked for a final meeting with Bethmann Hollweg, who told him he was surprised that Great Britain is actually willing to go to war against Germany over a ‘scrap of paper’ (the 1839 Treaty of London).

After the Austro-Hungarian ultimatum to Serbia, British Prime Minister Asquith wrote that the conflict will most likely expand through Russia and France’s involvement, but that Great Britain should remain neutral. Up until late July, Asquith, like most British politicians, hoped he could keep his country away from conflict. Therefore, he tried – unsuccessfully – to mediate the conflict between Austria-Hungary and Serbia on the one hand, Germany and Russia on the other hand.

Like Asquith, Edward Grey, the British Foreign Secretary, tried to mediate the Balkan conflict and asked the Germans to do the same. At the beginning of July, he was convinced that England and Germany, together, could work to diffuse the tensions between the Serbs and Austrians. Toward the end of the month, when Russia’s possible involvement became a problem, Grey promised that the British government would try to persuade the Russians into influencing the Serbs, while asking the Germans to temper their own allies. Later, he suggested – on multiple occasions – organising an international conference to appease the conflict. All of his proposals, including the one to limit the Austro-Hungarian actions to occupying Belgrade (as the ultimate compromise solution), were left unanswered. Until the very end, Grey believed the Germans were genuinely interested in avoiding the general war. In the end, however, he was the one to warn Lichnowsky that Great Britain will go to war if Germany invades Belgium.