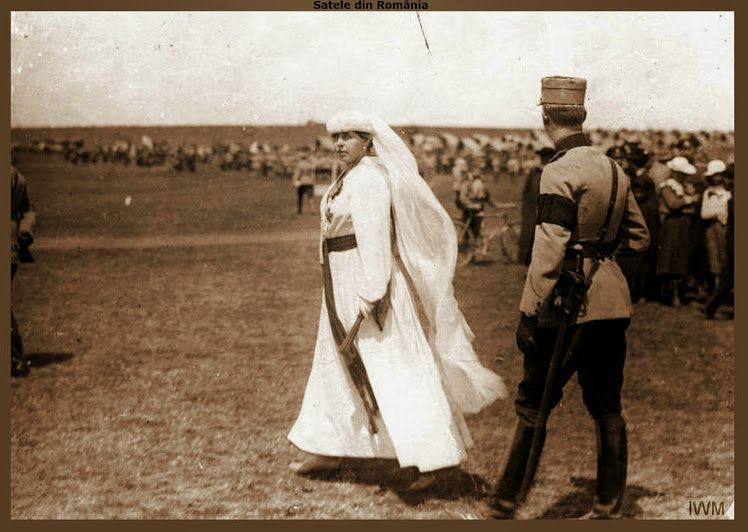 The Royal Family spent another Christmas in exile. Once more, those in distress were not forgotten, Queen Marie spending her entire time going through hospitals, being at the side of wounded soldiers and typhus patients. In 1917, however, they could enjoy a fir tree and a tasty meal with pudding and pie. On December 27, the anniversary of Mărioara, the third child of the Royal Family, took place.

Christmas Eve- I worked hard to organize it all, I tried to find something for everyone, I worked on arrangements and I had audiences. I received Mişu Cantacuzino, with whom I had a long political-military discussion. He has the same opinions as me, so it has not been difficult for us to understand each other.

I also received Lia Brătianu. At half past noon, the Metropolitan came with the icons and held a small service, and I asked him to stay for lunch. I had a pleasant conversation in Romanian during the meal and has given me many flattering praises about my charity work.

Before my tea I went to YMCA with Mignon and we doled out the usual cigarettes and biscuits. I had tea with Barbu, but we did not have much time to talk, because we still had a lot to do, and Nando also came to settle some things.

At seven o’clock in the morning I lit the candles in the fir tree and I received all our regular guests as before. All of the ladies and gentlemen, military and civilian, and then all of the servants, to the smallest chef’s aide, they all received something. Vasile and Nicolăiță also participated in the general merriment.

I received gifts that made me very happy. Each of my children gave me a portrait made by Bulgăraș and I liked them all, a rare thing when it comes to your children. Then Nando gave me a truly royal gift, a gift that was a complete, delightful surprise, a great portfolio, full of sketches from all of our painters- some of which are really pretty.

Once all the gifts from under the fir tree were offered, we gave a generous meal for all the guests, an occasion of great joy. We had a big buffet, a «cusp buffet», as my father called it, and everyone was allowed to go and choose what they liked most.

There was a lot of eating. The chef had worked as hard as he could, in times when everything was hard to find. He’s a really great chef. After dinner, we conversed with everyone, then I went to bed, very tired but rejoiced by the goodwill that dominated the evening, despite the hard times and sad, sad circumstances.

A day of hospital work! I spent my whole morning with Ecaterina, at the French hospital, giving them all, especially to those sick of tuberculosis, all the treats that we managed to get a hold of in great quantity. I stayed with them for a long time, I went through the hospital twice. At the French hospital I met two French officers. One had a very serious operation, but he was recovering.

We had invited old Sir George to lunch to give him an opportunity to enjoy our tasty meals, even more so that we had plum pudding and sweet pie with minced meat. After lunch, I rested a little, which was unusual, and I read Bernstein’s play L’elevation in which Ventura would play. Then I went to Brâncoveanu to see their Christmas tree and I spent a lot of time going from one salon to another because the hospital is huge.

Colonel Anderson brought me a wonderful gift, 250.000 francs, from the American Red Cross. Later Barbu came to see me for a few moments, I fell asleep early.

The 18th anniversary of Mignon. Dear and plump, she’s as sweet as her disposition. She seems much younger than she really is, she has preserved her innocence as a flower, very rare nowadays. She’s an extraordinary blend of childishness and serious thought. She is not selfish, she is among the rare beings that can go through any atmosphere and still remain untainted. She came early as she was still in bed to receive her gifts. I gave her a sketch that Bulgăraș had made and a thick, beautiful cloak from some of my cloth. I stayed in bed until 12, because I felt ridiculously tired- I tried to defend myself, not to be overwhelmed by visits, but without success.

Before lunch, I received a priest that came from across the border, who was first imprisoned in Romania, then in Bulgaria, he had many interesting but painful things to tell. I had no guests for lunch.

At three o’clock in the afternoon we went for a car ride and then for a walk outside the town, with Mignon. The morning had been superb, but the wind started beating and the weather worsened- it is clear that it is preparing to change […].

I stayed in my room and I read. Barbu came late, he was ill. After dinner, we gave a great party for Mignon, with all our close friends. We played innocent games and we’ve had a lot of fun.”