The last Easter in exile: “One candle for every grave” 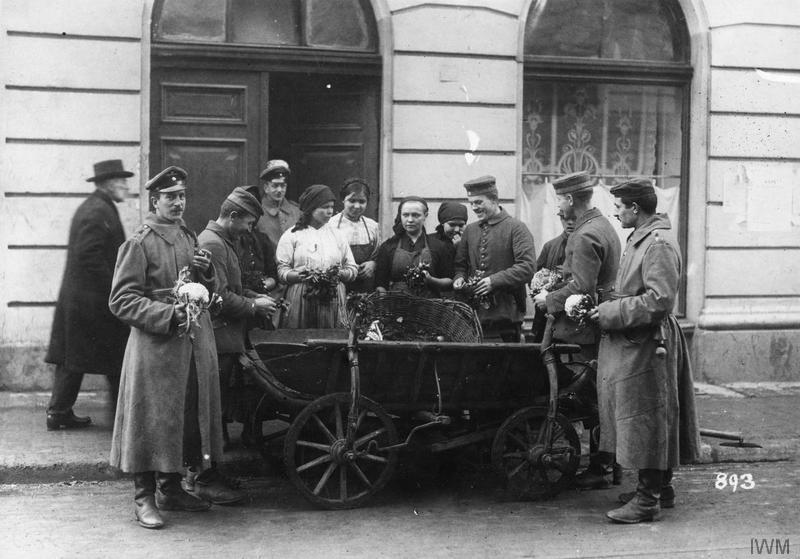 In the spring of 1918, the people of Muntenia were still refugees in Moldavia. So was the Royal Family. The last Easter away from the capital was spent by Queen Marie among peasants, soldiers and orphans. She shared small gifts, put flowers at the graves of soldiers, tapped red eggs with everyone. She listened to the Resurrection service in a small village church, near Iași.

[…] at seven o’clock we took the train, which in the meantime arrived in Onești. There, General Ballard and Lieutenant Simmons joined us for a frugal dinner, and we witnessed the last part of the long Good Friday services, in the Onești church, together with other soldiers and peasants.

The procession around the church was very picturesque: the candles, the crowd of peasants and soldiers, and in the background the huge military cemetery, with white crosses under the blooming trees, with one candle for every grave. I can safely say it was one of the most beautiful sights I’ve ever seen.

Once the ceremony was over, I passed through the hundreds of graves and put flowers on the crosses that did not have any- I put as many as I could, but I did not have enough with me.

Peasants and soldiers followed me in respectful silence. From above, the stars competed with the candle lights sitting on top of the graves. I rarely encountered such a moving beauty than that of the forest of crosses beneath the flowering trees, with hundreds and hundreds of candles among them.

I went to sleep early, my heart torn by a thousand thoughts and contradictory feelings- it might have ended differently, but all those courageous heroes are at peace sleeping beneath the earth, not knowing of our current desperation!

[…] The hard part was after dinner, when I had to stay awake to go to the midnight service. Still, I was getting sleepy, and even fell asleep, but I managed to come to my senses without too much difficulty, in order to go to church, as duty required of me.

The Resurrection service spent among soldiers and peasants in the courtyard of the village church was delightful. I was glad I did not stay in Iasi- Oh, how much!

I did not stand until the end of the service, which is long; it’s the only thing that my royal patience or my royal feet cannot endure. I returned with Mrs. Văitoianu and her daughter, General Pătrașcu and Colonel Manolescu, and we took dinner together on the train, where I said the first «Christ has Risen! ». I even managed to get a hold of small gifts for everyone, a considerable success for the days we’re living […].

[…] The Văitoianu’s, alongside General Mărdărescu and Colonel Manolescu had lunch with us, and at three o’clock we inaugurated another National House in Borzeşti, the village where Stephen the Great was born, and where one can still see an old church from his time.

There, waiting for us, was a similar ceremony and a lot of eager and cheerful peasants, among whom we passed and we tipped eggs. They are delighted by this: young and old, children, priests, and soldiers huddled with eggs ready to tap them with my egg, and the more mine resisted before breaking, the greater the joy. This time Ileana accompanied me. At the end, the soldiers and peasants played a hora around us- the rain stopped, but everything was wonderfully green and refreshed, only the air was cooler.

I went back to the train, where I said my goodbyes to my companions and left for Pufeşti. […].

I first inspected the orphanage, saw the children at the table, tapped eggs with them, looked at a large hora made by the soldiers, and then I was taken to a kind of theatre barracks holding the usual performances, with a lot of patriotic poetry. The atmosphere was extraordinarily cheerful and full of good will”.