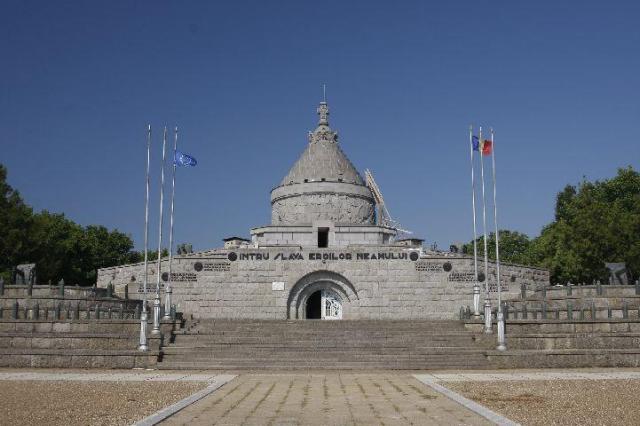 Fought between August 6 and August 19, 1917, in the area of ​​Vrancea County in south western Moldavia, the Battle of Mărășești represented the most important victory of the Romanian army during the First World War. With the victories at Mărăști and Oituz, in the summer of the same year, the Battle of Mărășești decisively prevented the complete collapse of the Romanian state during the Great War. The defeat forced the Central Powers to give up permanently on the offensive on the Romanian Front and to switch to defence.

Built on the site of the battle, the Mărășești Mausoleum is the largest monument in Romania commemorating those who fell during the First World War. It was made according to the plans of the architects George Cristinel and Constantin Pomponiu, between 1923 and 1938. The works were carried out in two distinct stages (1923-1924, the ground floor, respectively 1936-1938, the upper level).

The Mausoleum from Mărășești, built at the initiative of the Orthodox Women’s Society

The initiative to build the mausoleum belonged to the committee of the Romanian Orthodox Women’s Society. The proposal to raise a Mausoleum in Mărășești was submitted to King Ferdinand and to the government led by Ion I. C. Brătianu. The request being approved, an Executive Committee for the construction of the Mausoleum was established, with Alexandrina Gr. Cantacuzino, the leader of the Romanian Orthodox Women’s Society, as president. The purpose of the committee was to raise the necessary funds for the construction, to find a suitable location and to designate a project.

On July 14, 1921, George G. Ulise Negroponte, the owner of the lands in the area chosen for the monument, donated 20 hectares for the construction of the Mausoleum. To realize the project, a contest was organized, won by the project of the architects Constantin Pomponiu and George Cristinel.

Work began on August 6, 1923, exactly 6 years after the great battle.In 1924, the remains of the soldiers began to be entombed in the mausoleum crypt, and in the autumn of the same year, the remains of General Eremia Grigorescu, who died on July 21, 1919, were buried in the central sarcophagus. Following the completion of the first stage, the monument resembled a circular crypt, 40 meters in diameter, in which 16 galleries were arranged radially. On September 27, 1924, a religious ceremony took place, in the presence of Queen Marie and other officials.

The Mărășești Mausoleum, officially opened in 1938

Due to lack of funds, the works were interrupted for 12 years. In 1936, they were resumed, being completed in 1938. The Mărășești Mausoleum was officially inaugurated on September 18, 1938, in the presence of King Carol II and numerous officials.

Built from reinforced concrete plated with Deva andesite blocks, the Mărășești Mausoleum has a circular shape, with a height of 30 meters and a diameter of 40 meters. The upper part of the monument resembles an arch, called the “Dome of Glory”, whose base is flanked by four vultures of Deva granite, surrounded by a huge bas-relief frieze, with a total area of ​​100 square meters, made by sculptors Ion Jalea and Cornel Medrea.

Three superimposed terraces lead to the entrance to the dome, which is decorated inside with a fresco painted by Eduard Săulescu. At the ground floor of the monument are the crypts that shelter the remains of more than 5.000 Romanian soldiers and officers. On the upper floor there is a roundabout where the flags of the Romanian units participating in the battle of Mărășești are placed.

In 1938, on the occasion of the inauguration of the Mausoleum, a jubilee medal was issued, with a diameter of 60 millimetres, in three variants: gold, silver and bronze. On the obverse of the medal were the effigies of King Ferdinand I (right) and Carol II (left), face to face, and in the middle, below, was the coat of arms of the Kingdom of Romania. On the reverse, in the middle, the Mausoleum of the Heroes from Mărășești is displayed.