The mission of General Constantin Coandă, the Romanian military attaché at STAVKA 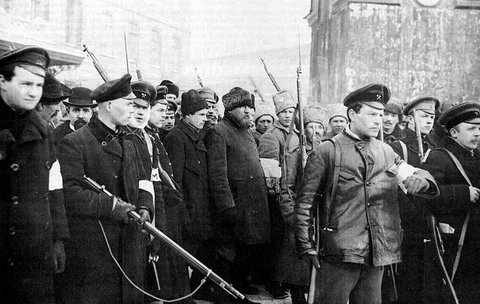 The revolution that started in Russia in early March 1917 caused deep concern among Romanian authorities, given that Russia was the only ally that could offer Romania significant support in the fight against the Central Powers. Under these conditions, General Constantin Coandă, the Romanian military attaché at STAVKA, the High Command of the Russian armed forces, proved to be a vital source of information for Romanian authorities. His reports, which were sent directly to Prime Minister Ion I. C. Brătianu, gave important details about the political and military situation in Russia, in 1917.

On March 31, a few weeks after the abdication of Tsar Nicholas II, General Coandă sent a report regarding the meeting held by Allied military attachés with the Minister of War of the Provisional Government. The report ended with an assessment of the Russian army:

“One must act wisely and slowly to restore order and discipline in the army. It is necessary for the tymph’s first drunkenness to pass for energetic measures to be taken, and even then only little by little. The Provisional Government does not ignore the fact that the present instructions are impregnated by softness, but knowing this fact is its excuse and it has the firm intention to take back control of the situation in a short time, in about 15 days”.

Asking for the support of the Allies in handling the anarchic tendencies of the army, the Russian minister did not hesitate to bring to their attention the problems they were facing in the Baltic Sea fleet:

“In the Black Sea fleet, everything is going well so far. […] It’s not the same in the Baltics. There, the sailors rebelled against their officers and massacred them. Because of this, they were all left without officers, yet they are aware of the need to maintain their ships”.

“The garrison troops have renounced disciplinary and hierarchical rules. All of the efforts of the Russian Great General Headquarters are aimed at preventing this epidemic from spreading to the troops on the front. But, even with everything that was done, it could not prevent it from reaching the troops in the second line and reserves, and many soldiers left to return to their homes. Many officers were dismissed by their soldiers”.

“A livelier propaganda began […] on our side, in the committees in Iași; first at the Russian 9th Army, then they increasingly protested against the judgments of our martial courts regarding traitors and spies, claiming that these sentences are merely a means of persecution against Jews and socialists. The day before yesterday in Roman, the committee organized a demonstration with music and black flags in the city and called for the abolition of martial law in the Romanian army. Despite the indignity of such an interference in Romanian internal affairs, given the diseased state of the Russian army, in order to calm the agitations, His Royal Majesty ordered the suspension of all capital executions; […] General Shcherbachev [the commander of the Russian troops from Romania], though animated by the best of feelings, does not dare to intervene with energy. […] In reality, consciously or not, Russian committees are a German instrument aimed at bringing Russia against us”.

Brătianu asked General Coandă to intervene with the Russian army in order to stop the agitations on the Romanian Front. The response received from General Aleksei Brusilov was disheartening. He said that “the Russian army is disorderly due to lack of discipline and has asked Mr. Kerensky [then Minister of War and future Prime Minister of the Russian Provisional Government] to restore the death penalty”, saying that “the [Russian] soldier does not want to be mistreated anymore, he wants to live and to have land”.

The launch of the Kerensky Offensive, on July 1, in Galicia brought for a short time a glimmer of optimism in Romania. However, this optimism was short lived. The failure of this military action led to the collapse of Russia, paving the way for the Bolsheviks to take power. Romania saw itself all alone on the Eastern Front, against the Central Powers, and was forced to accept a separate peace.