The negotiations of Romania with the Entente 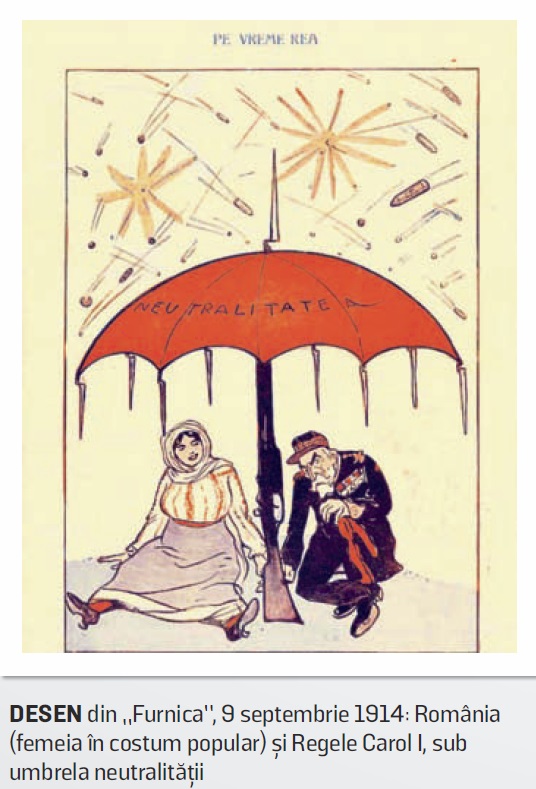 On July 28, 1914, when the First World War broke out, Romania was a member of the Triple Alliance ever since 1883, but it distanced itself from Austro-Hungary because of Budapest’s policy of Magyarization of the Romanians in Transylvania. Romania’s position on the conflict was discussed at the Crown Council convened on August 3, 1914 by King Carol I of Romania.

Prime Minister Ion I. C. Brătianu and the vast majority of those who participated in the Council supported the neutrality of the country. The main argument was that the Treaty of 1883 required Romania’s entry into war only if the Central Powers were attacked. But in this case, Austro-Hungary and Germany were the ones attacking Serbia. After Italy, which was had signed a similar treaty with the Central Powers made the decision to remain neutral, Romania also followed the path of neutrality.

During the period of neutrality, Romania’s ties to the Entente were strengthened. On October 1, 1914, the authorities in Bucharest signed an agreement with the Russian Empire, which stipulated that, in exchange for Romania’s neutrality, Russia would recognize its right over the Austro-Hungarian provinces inhabited by the Romanians and was left to choose the opportune moment when it will occupy them. Entering into a long-term war of attrition determined both London and Paris, in particular, to use all of their leverages to bring Romania into the conflict on their side “now or never”.

The entry of Romania into the war would’ve led to a decrease in the pressure exerted by the Germans on the Western Front, but exposed the country to the danger of being attacked from two directions, by Bulgaria from the south and by the Austro-Hungarian and German troops from the north. That is why Romanian Prime Minister Ion I. C. Brătianu sought to negotiate the best conditions for the country’s entry into war and requested the provinces inhabited by Romanians from Austro-Hungary: Banat, Crişana, Maramureş, Bukovina and Transylvania. On July 4, 1916, Brătianu announces the Entente that Romania is ready to join the alliance.

The negotiations took five weeks and delayed the entrance into the war until August 27. The Allies were on the brink of despair. Here is what the Romanian Prime Minister, Ion I. C. Brătianu, told the French ambassador to Bucharest, the Count of Saint-Aulaire: “I know very well that the Allies are accusing me of blackmail, when I ask for guarantees that are vital to us. In more amicable terms, I’m compared to a carpet seller. What do you want? That, by exposing myself too soon, to invite the enemy into breaking my home and making it his own, all the while being refused the weapons by which to defend it? First accept the conditions in the absence of which I cannot engage my country in the war without betraying it and you will see then who I’m swindling”.

The conditions of Romania

What were the conditions Brătianu was referring to? First of all, in order to conclude a military convention, the Entente was asked to fulfil three requirements:

To meet the first condition, the British and the French have promised that the transports destined for Romania will be shipped through Russia. The way things were going on the front in the summer of 1916 seemed to meet Brătianu’s second condition: the German army failed to conquer Verdun, the Allies were gathering an army in Thessaloniki, the British were preparing a great offensive on the Somme, and the Russians were launching their last big successful offensive, that of General Aleksei Brusilov. It looked like that this was the moment expected by Brătianu.

Regarding the last point, things were more complicated. Brătianu managed to convince Russia in sending an expeditionary force to Dobrogea. Even though he requested 200.000 soldiers, the Russians refused to promise more than 50.000. But the real problem was the Allied army in Thessaloniki. The French claimed to have more than 400.000 men when in fact, there were less than 230.000. The Thessaloniki army had to prevent the Bulgarian-German troops in Bulgaria from attacking Romania. There have been doubts ever since the beginning about the potential of these Allied troops led by French general Maurice Sarrail.

In addition to these issues, Brătianu also called for two other clauses to be included in the political convention: one stipulated that neither party should make separate peace and the other that Romania would be guaranteed equal status with the Allies in all peace-related decisions. Russia vehemently opposed to the latter and only France’s intervention with Russia eased the situation. Here is what the French ambassador in Bucharest, Count of Saint-Aulaire, recounts in his memoirs about how this situation was solved: “On August 4, 1916, Poincaré wrote to Emperor Nicholas a letter in which he signalled to him, in the most persistent terms, the need to attract Romania to our side without any further delay. This letter proves how much hope France put in the intervention of Romania, but without doing, as we shall see soon, what was essential to achieve it. […] General Joffre and the French General Staff think we are in the face of an opportunity that should not be squandered. The immediate Romanian intervention would allow us to definitively tip the balance in our favour. In a few weeks, when it will be snowing in the Carpathians, and when the passes will be guarded, the right moment will have passed”. This message prompted Nicholas II of Russia to overcome the objections of his council of ministers and of his general staff. He replied to Poincaré that he would order that the signing of the convention be made as soon as possible, as Brătianu demanded.

On the morning of August 17, 1916, Romania signed the alliance treaty with the representatives of the four powers of the Entente.