The Occupied Part of Romania 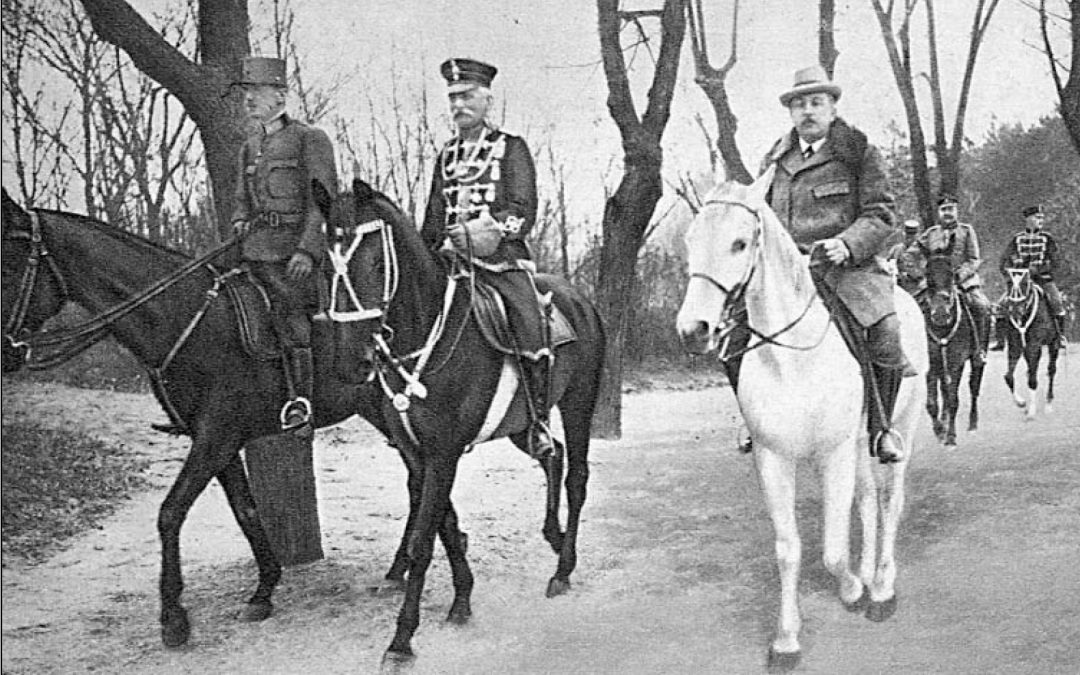 The part of Romania which was conquered and occupied by the Central Powers was not only more important strategically (closeness to the Danube and to the Balkans), but it was also economically more interesting (resources). Immediately after the invasion of Bucharest on 9 December 1916 Field Marshal von Mackensen implemented the German military administration in Romania which was assigned to the command of the 9th Army. The military administration officially started work at the end of December and continued until early November 1918.]

As soon as the campaign against Romania had finished, the involved powers withdrew their troops because they were increasingly needed on other fronts. Thus, the number of occupants decreased gradually until 1918 when there was only a fraction of the original numbers. Those formations which stayed in the occupied part of Romania had various tasks: To ensure the own military and political position within the occupation area; to provide for their own troops and civilians throughout the country; to influence the economic production within the country; to ensure the supply of the Romanian civilian population and to export as many resources as possible; to rebuild a Romanian state administration which should increasingly be able to assume responsibilities to relieve the occupation regime.

The occupation regime appointed a centrally organised military administration to secure its own military and political position and it obtained both executive and legislative responsibility. It was situated in Bucharest and had military offices in all districts at its disposal; the latter were operatively and administratively under the control of headquarters, and had to report news about the situation within the country. In Valachia problems with coordination in respect of competence arose occasionally between German and Austro-Hungarian commands. Intelligence services played an important role in sounding out the Romanian civilian population and in reconnoitring the situation in the free part of Romania.

Since the supply situation in countries of the Central Powers was already rather bad in 1916, the occupation regime assumed that the supply of troops and accompanying civilians (administration, medical services, technical advisors etc.) could be easily be achieved through the occupied part of Romania. As there was no longer any combat in Romania and the supply situation was relatively better than in other countries, the foreign soldiers were keen to be stationed in Romania for as long as possible.

The major economic headquarters of the military administration periodically had to survey the supply of goods and to arrange the required redistribution: furthermore it had to take measures to increase economic production and ensure the politically reasonable and fair distribution of goods among natives and countries of the occupied powers. In order to facilitate transport a network of light railways was established to take goods to Bucharest or the Danubian ports. From there products went across either on the main railway transport line via the Carpathian Mountains to Austro-Hungary and Germany or upstream via the Danube. Furthermore, the professionals, together with the economic headquarters and in cooperation with the Romanian rump government, had the task of restructuring the finance system, which led to a number of sanctions.

Coincidentally with the occupation of Valachia the existing Romanian government fled in 1916 to Jassy (Moldavia); therefore initially no national authorities existed. The German military administration consequently took measures so that the state-owned administrative bodies began to work starting in February/March 1917 and more and more responsibilities were gradually allowed. After the conclusion of the peace treaty in Bucharest on 7 May 1918 (which was not ratified by the Romanian parliament in the occupied part), the government in Bucharest was responsible for most of the administration, even though the occupying power stayed in the country for only a few months. The scope of this administration was kept under control of the occupation regime.

The relationship between the occupying partners was not the best from the beginning of the occupation, but all involved parties tried to suppress the many small conflicts in everyday life, and avoid bringing them to Romanian society’s attention. Austria-Hungary in particular, which held a strong diplomatic as well as economic position in Bucharest before 1916, tried to reclaim an influential role. The installation of a consular representative alongside the Austro-Hungarian delegate at the German military administration in Romania was a success. As deputy of the imperial-royal Ministry of Foreign Affairs he had far more influence than officially admitted.

Right from the beginning there was a big contrast between the theory and reality of occupation. Initially the Germans were held in high esteem which decreased however more and more with their harsh attitudes (scattered executions in 1918). In contrast the “little brother” Austria-Hungary appeared as the enemy in the country with whom it seemed to be easier to get along. At first Romanian politicians in the occupied part of Romania were forced to act carefully to ensure their influence on the circumstances. Gradually two sides emerged: those who were willing to arrange themselves with the Central Powers after the war and those unwilling to do so. Only in rare cases did the Romanian population openly resist; usually passive resistance was sufficient to signal their disagreement with the occupation regime. There were no major problems with Romanian prisoners of war until the end of 1917, but more and more people fled, trying to reach the unoccupied part, where the Romanian army consolidated. Discipline among the occupation troops decreased noticeably in 1918 because the unauthorised removal from the troops increased and goods found their way to private use.