The Oradea Declaration: The document that proclaimed the right of Romanians in Austria-Hungary to self-determination 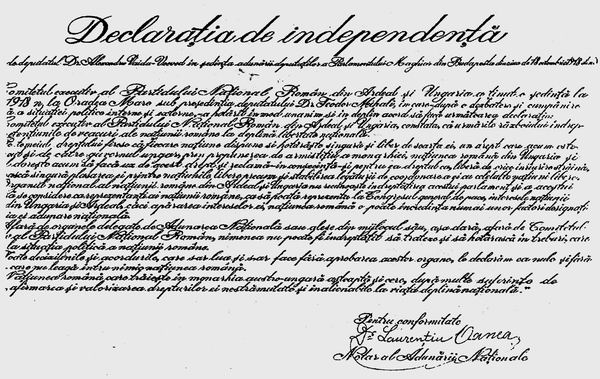 On October 12, 1918, the Executive Committee of the Romanian National Party from Transylvania met in Oradea, at the house of lawyer Aurel Lazăr, to decide how Romanians could fulfill their national objectives taking into account the imminent defeat and dissolution of Austria-Hungary. During this meeting, a declaration was adopted proclaiming the right of the Romanian nation to self-determination and proposing to convene a national assembly.

The meeting at the house of lawyer Aurel Lazăr was attended by the most important leaders of the Romanian National Party who were not behind bars or on the front: Teodor Mihali, the chairman of the Romanian National Party Executive Committee, Vasile Goldiș, Ştefan Cicio-Pop, Ioan Suciu, Aurel Vlad, Alexandru Vaida-Voevod, Aurel Lazăr and Ioan Ciordaș.

After long debates, the Romanian National Party Executive Committee adopted a statement drafted by Vasile Goldiș, which stated the following:

“On the basis of the natural law that every nation can order and alone decide its fate, the Romanian nation… wants now to make use of this right and therefore demands for itself the right, free of whatever foreign involvement, to decide its own place among other free nations”.

Furthermore, the proclamation showed that “the national body of the Romanian nation does not recognize the right of the Hungarian parliament and government to be considered as its representative and to represent the interests of the Romanian nation at the general peace congress. All decisions that would be taken without its approval are null and void”.

The declaration stated in its closing paragraphs that “the Romanian nation expects and claims, after many centuries of suffering, the assertion and valorisation of its resolute and inalienable rights to full national life”.

The document was read by Alexandru Vaida-Voievod in the Parliament of Budapest, on October 18, 1918.

The “Oradea Declaration” stood at the basis of all the actions of the Transylvanian Romanians in the following period, which culminated in the Great National Assembly of Alba Iulia, which proclaimed the union of Transylvania with Romania.

On October 30, 1918, the Central Romanian National Council was set up in Budapest, as the governing body of the Romanians and representing the will of the entire Romanian population in Transylvania, Banat, Crișana and Maramureș. The council consisted of six members of the Romanian National Party (Vasile Goldiș, Aurel Lazăr, Theodor Mihali, Ștefan Cicio-Pop, Alexandru Vaida-Voievod, Aurel Vlad) and six members of the Social-Democratic Party of the Romanians from Transylvania (Tiron Albani, Ion Flueraș, Enea Grapini, Iosif Jumanca, Iosif Renoiu and Bazil Surdu). The Council started its activity in Arad, on November 2, in the house of Ștefan Cicio-Pop, who was appointed the president of the Transylvanian Romanians’ governing body.

On November 10, the Council sends a diplomatic note, drafted by Vasile Goldiș, to the government in Budapest, calling for the takeover of “full governing power over the territories inhabited by Romanians in Transylvania and Hungary”. The failure of the negotiations with the Hungarian authorities prompted the council to draft, through the same Vasile Goldiș, a manifesto entitled “To the peoples of the world” (November 18), announcing the refusal of the Hungarian authorities to take into account the demands of the Romanians.

Consequently, on November 20, the Central Romanian National Council convened the Great National Assembly in Alba Iulia on December 1, 1918, which began with the words: “History calls on us to act” and stated that “the Romanian nation in Hungary and Transylvania is going to have a decisive say on its fate and this word will be respected by the whole world”.

The 1.228 deputies, representatives of the Romanians from Transylvania, who met on December 1, 1918 at the Great National Assembly, unanimously decreed the Union of Transylvanian with Romania.