The Paris Peace Conference, the leaders of the Great Powers and the Russian Bolsheviks 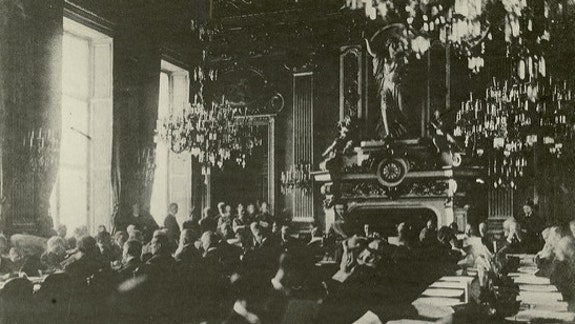 In January 1919, all roads led to Paris. After the greatest war that mankind had ever seen, the peace conference was the most discussed topic. The most powerful politicians and generals in the world arrived in Paris. Countries large and small had interests closely related to the conference. All the states that mattered were present in Paris, with one exception Russia, although they had been fighting on the side of the victors for three years. The revolutions of 1917 had replaced the tsar with a system of governance that nobody knew much about. What did the leaders of the Great Powers present in Paris knew about the Russian Bolsheviks? How did they relate to them?

The Russian Empire was a part of the Entente when the First World War started, and had probably saved France from defeat by attacking Austria-Hungary and Germany on the Eastern Front. For three years in a row, Russia struggled with the Central Powers, causing them great losses, but suffering even greater damage. The war effort would eventually lead to the implosion of Russian society. In 1917, over a period of eight months, Russia went through from autocracy to liberal democracy and then to a revolutionary dictatorship, led by the extremist faction of the Russian socialists, the Bolsheviks. Most of the world, including many Russians, knew very little of the Bolsheviks. At the beginning of 1918, they were the ones that concluded peace with the Central Powers.

With the 1917 revolutions, but especially after the peace with the Central Powers, the country entered a process of dissolution, new states such as Poland, the Baltic States, Ukraine, Armenia, Georgia, etc. emerging from the ruins of the Russian Empire.

“Russia was a jungle”

During the summer months of 1918, the Great Powers withdrew their diplomatic missions from Russia, which became increasingly involved in a civil war between the Bolsheviks and all those standing in their way, socialists, anarchists, liberals, etc. The country was becoming more isolated and increasingly fragmented by civil wars. Lloyd George, the British prime minister present at the Paris Peace Conference, said at the beginning of the proceedings that Russia became a land of the unknown: “Russia was a jungle where no one could say exactly what was happening”. The only safe way to send diplomatic messages to Russia was through Stockholm, where the Bolsheviks had a representative. The Great Powers did not understand and did not know what was happening in Russia when the Paris Peace Conference began. This did not prevent those present in Paris from expressing their opinion about the Russian Bolsheviks. The delegates did not waste their time with the events in Russia. They were rather concerned with setting the peace terms for the defeated Central Powers. They thought of Russia only when they were anxious about troubles taking place closer to their borders, but at first they did not thought that the social unrest in Germany, Austria, Hungary etc. had anything to do with what was happening in Russian space. The leaders of the Great Powers were afraid of the spread of revolutionary ideas, but not necessarily of those which came from Russia, which they did not understand or knew much about. The West’s reactions to what was happening in Russia were divided.

Lloyd George wanted Russia to participate in the Peace Conference, as he testified to Clemenceau, in December 1918. Clemenceau acknowledged that he had a special sympathy for the Russian people: “The Russian soldiers had fought lacking weapons and ammunition; they had been betrayed in a shameful manner by their own government, and it was no wonder that, in its bitterness, the Russian people had rebelled against the Alliance”.

On the other hand, the French Prime Minister, Georges Clemenceau, detested the Bolsheviks, whom he considered to be German tools and was appalled by their methods and crimes. Clemenceau told Arthur Balfour that: “If the Bolsheviks had sent their delegates to Paris, the extremists could have been encouraged, and the middle class would have been alarmed. This could not have been conducive to a positive atmosphere at the Peace Conference”.

Moreover, Clemeceau warned that if the other Allied leaders insisted on inviting the Russian Bolsheviks to the Peace Conference he would resign.

US President Woodrow Wilson believed in the beginning of the Bolshevik reign that their goal was to limit the power of big business and government and to provide extended freedoms to individuals. Wilson warned his counterparts at the Peace Conference that “if the Bolsheviks had come to their senses and agreed on a policy of harmonious rule of law, then their ideology would have spread all over Europe, leading to the overthrow of governments in power”.

“Were the Bolsheviks speaking on behalf of the entire Russian people?”

On the other hand, the leaders of the Great Powers present in Paris also asked other questions regarding the Russian Bolsheviks. Were the Bolsheviks speaking on behalf of the entire Russian people? They controlled only the core of a huge country and a few major cities such as St. Petersburg and Moscow. The Russian Bolsheviks had to deal with rival governments: the ones of the Whites, in the south, led by Anton Denikin, and the one in Siberia led by Admiral Aleksandr Kolceak. In Paris, Russian exiles, from conservatives to radicals, had convened a Russian political conference, in which they spoke on behalf of all Russians who did not sympathize with the Bolsheviks.

Eventually, the leaders of the Great Powers present in Paris made the decision not to invite the Bolsheviks to the Peace Conference and to try to isolate them.