The Peace Treaty of Brest-Litovsk 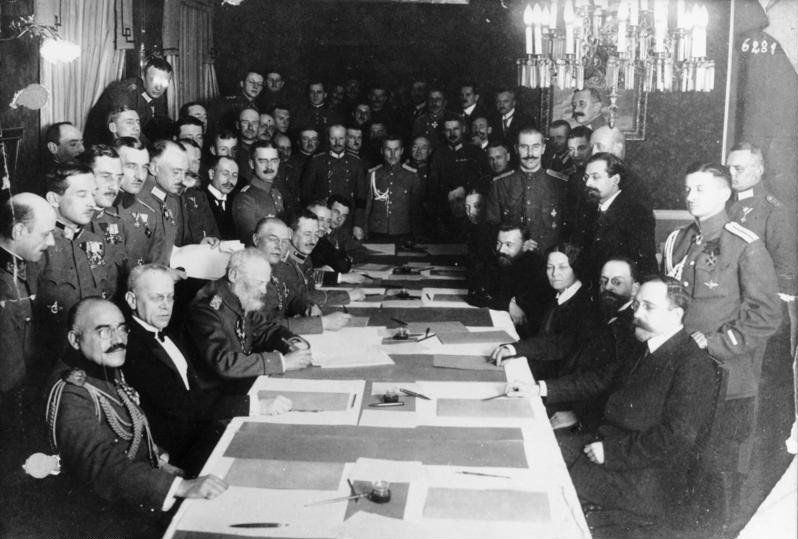 The Treaty of Brest-Litovsk was a peace treaty signed on 3 March 1918 between the new Bolshevik government of Soviet Russia and the Central Powers (Germany, Austria-Hungary, Bulgaria, and the Ottoman Empire), that ended Russia’s participation in World War I. The treaty was signed at Brest-Litovsk, after two months of negotiations. The treaty was agreed upon by the Bolshevik government to stop further advances by German and Austro-Hungarian forces. According to the treaty, Soviet Russia defaulted on all of Imperial Russia’s commitments to the Triple Entente alliance.

Article I. Germany, Austria-Hungary, Bulgaria, and Turkey, for the one part, and Russia, for the other part, declare that the state of war between them has ceased. They are resolved to live henceforth in peace and amity with one another.

Article II. The contracting parties will refrain from any agitation or propaganda against the Government or the public and military institutions of the other party. In so far as this obligation devolves upon Russia, it holds good also for the territories occupied by the Powers of the Quadruple Alliance.

Article III. The territories lying to the west of the line agreed upon by the contracting parties which formerly belonged to Russia, will no longer be subject to Russian sovereignty; the line agreed upon is traced on the map submitted as an essential part of this treaty of peace. The exact fixation of the line will be established by a Russo-German commission.

No obligations whatever toward Russia shall devolve upon the territories referred to, arising from the fact that they formerly belonged to Russia.

Article IV. As soon as a general peace is concluded and Russian demobilization is carried out completely Germany will evacuate the territory lying to the east of the line designated in paragraph 1 of Article III, in so far as Article IV does not determine otherwise.

Russia will do all within her power to insure the immediate evacuation of the provinces of eastern Anatolia and their lawful return to Turkey.

Article V. Russia will, without delay, carry out the full demobilization of her army inclusive of those units recently organized by the present Government. Furthermore, Russia will either bring her warships into russian ports and there detain them until the day of the conclusion of a general peace, or disarm them forthwith. Warships of the States which continue in the state of war with the Powers of the Quadruple Alliance, in so far as they are within Russian sovereignty, will be treated as Russian warships.

The barred zone in the Arctic Ocean continues as such until the conclusion of a general peace. In the Baltic sea, and, as far as Russian power extends within the Black sea, removal of the mines will be proceeded with at once. Merchant navigation within these maritime regions is free and will be resumed at once. Mixed commissions will be organized to formulate the more detailed regulations, especially to inform merchant ships with regard to restricted lanes. The navigation lanes are always to be kept free from floating mines.

Esthonia and Livonia will likewise, without delay, be cleared of Russian troops and the Russian Red Guard. The eastern boundary of Esthonia runs, in general along the river Narwa. The eastern boundary of Livonia crosses, in general, lakes Peipus and Pskow, to the southwestern corner of the latter, then across Lake Luban in the direction of Livenhof on the Dvina. Esthonia and Livonia will be occupied by a German police force until security is insured by proper national institutions and until public order has been established. Russia will liberate at once all arrested or deported inhabitants of Esthonia and Livonia, and insures the safe return of all deported Esthonians and Livonians.

Finland and the Aaland Islands will immediately be cleared of Russian troops and the Russian Red Guard, and the Finnish ports of the Russian fleet and of the Russian naval forces. So long as the ice prevents the transfer of warships into Russian ports, only limited forces will remain on board the warships. Russia is to put an end to all agitation or propaganda against the Government or the public institutions of Finland.

The fortresses built on the Aaland Islands are to be removed as soon as possible. As regards the permanent non- fortification of these islands as well as their further treatment in respect to military technical navigation matters, a special agreement is to be concluded between Germany, Finland, Russia, and Sweden; there exists an understanding to the effect that, upon Germany’s desire, still other countries bordering upon the Baltic Sea would be consulted in this matter.

Article VII. In view of the fact that Persia and Afghanistan are free and independent States, the contracting parties obligate themselves to respect the political and economic independence and the territorial integrity of these states.

Article VIII. The prisoners of war of both parties will be released to return to their homeland. The settlement of the questions connected therewith will be effected through the special treaties provided for in Article XII.

Article IX. The contracting parties mutually renounce compensation for their war expenses, i.e., of the public expenditures for the conduct of the war, as well as compensation for war losses, i.e., such losses as were caused [by] them and their nationals within the war zones by military measures, inclusive of all requisitions effected in enemy country.

Article X. Diplomatic and consular relations between the contracting parties will be resumed immediately upon the ratification of the treaty of peace. As regards the reciprocal admission of consuls, separate agreements are reserved.

Article XI. As regards the economic relations between the Powers of the Quadruple Alliance and Russia the regulations contained in Appendices II-V are determinative….

Article XII. The reestablishment of public and private legal relations, the exchange of war prisoners and interned citizens, the question of amnesty as well as the question anent the treatment of merchant ships which have come into the power of the opponent, will be regulated in separate treaties with Russia which form an essential part of the general treaty of peace, and, as far as possible, go into force simultaneously with the latter.

Article XIV. The present treaty of peace will be ratified. The documents of ratification shall, as soon as possible, be exchanged in Berlin. The Russian Government obligates itself, upon the desire of one of the powers of the Quadruple Alliance, to execute the exchange of the documents of ratification within a period of two weeks. Unless otherwise provided for in its articles, in its annexes, or in the additional treaties, the treaty of peace enters into force at the moment of its ratification.

In testimony whereof the Plenipotentiaries have signed this treaty with their own hand.

Executed in quintuplicate at Brest-Litovsk, 3 March, 1918.