The peace treaty of Trianon 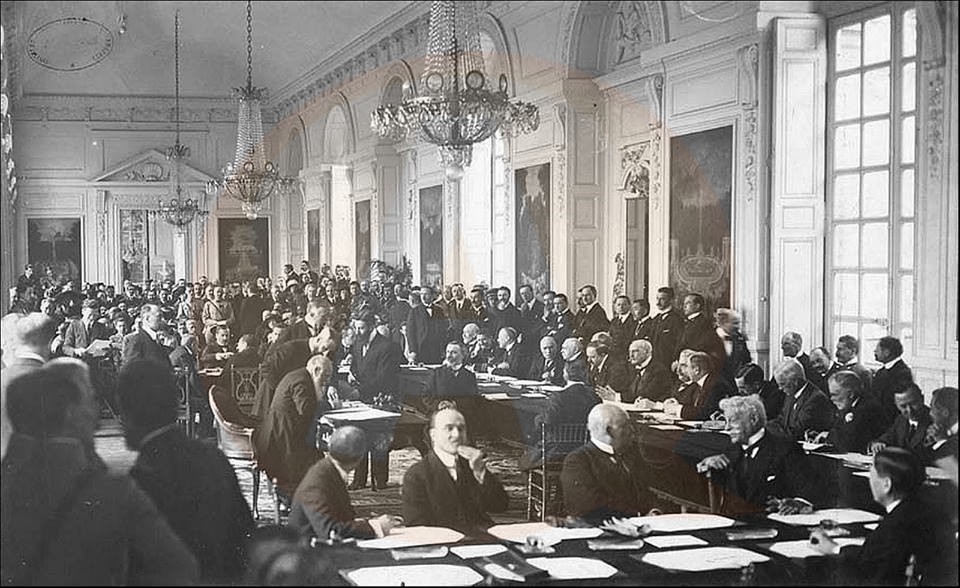 The Trianon Peace Treaty was signed on June 4th, 1920 by France, Great Britain, Italy, the United States, Japan, Romania, the Kingdom of Serbs, Croats and Slovenes, Czechoslovakia and nine other states, on the one hand, and Hungary, on the other hand, being represented by Agost Benárd, Minister for Labour and Social Welfare, and Alfréd Drasche-Lázár, Plenipotentiary Minister. But what did the treaty contain?

Composed of 12 parts, the Treaty of Trianon began, like all other peace treaties signed at the Paris Peace Conference of 1919-1920, with the Covenant of the League of Nations, that is, the materialization of the idea of US President Woodrow Wilson on the need for an international body that had to discuss and resolve international issues to avoid another world war.

The second part of the Treaty was dedicated to the borders of the new Hungary. In addition to details concerning the borders between the Hungarian state and the neighbouring states- Austria, Czechoslovakia, Romania and the Kingdom of Serbs, Croats and Slovenes- it was also established in article 29 that the demarcation on the ground would be made by Delimitation Commissions which were to start their activity within 15 days of the treaty’s entry into force. The borders of Hungary were those established by the commissions of experts of the Peace Conference as early as the spring of 1919.

The third part of the Treaty, article 45, entitled “European political clauses”, stipulates the clauses regarding the relations between Hungary and Romania: “Hungary renounces, in favour of Romania, all rights and titles over the territories of the former Austro-Hungarian Monarchy, located beyond the borders of Hungary”. The composition of the Boundary Commissions was established in article 46; for example, the Romanian-Hungarian border was to be drawn by a Commission of seven members, five Allies, one Romanian and one Hungarian. In accordance with article 47, Romania undertook to sign a Treaty on the protection of racial, linguistic and religious minorities – which, in fact, it had done ever since December 1919- as well as to protect the “freedom of transit and to apply a fair trade regime in relation with other nations”.

Articles 54 through 60 represented the commitments made by the Hungarian state to protect national minorities in Hungary, and articles 61 to 66 were clauses on nationality and citizenship.

By article 74, Hungary fully recognized the borders of Austria, Bulgaria, Greece, Poland, Romania, Yugoslavia and Czechoslovakia; and by article 77, Hungary undertook to submit without delay to the Allied and Associated Governments concerned all archives, registers, titles and documents of any kind belonging to the civil, military, financial or judicial administrations of the ceded territories.

The fifth part (articles 102-143) was entitled “Military, naval and air clauses”, being dedicated to the disarmament, within three months, of defeated Hungary.

The issue of reparations

The eighth part of the Treaty of Trianon – “Reparations” – began by asserting Hungary’s responsibility for the outbreak of the world war, hence its responsibility for “losses and damages” (article 161). Even though it was acknowledged that Hungary’s resources were not sufficient for full reparations, Hungary nevertheless undertook to “repay” all damages, starting with those incurred to the civilian population (article 162).

In the tenth part of the document- “Economic clauses” ‘the equal treatment of Hungarian trade was stipulated (articles 200-202), as well as the fact that any favour granted by Hungary to any of the Allied States should be extended immediately to all Allied States (article 203).

It was also stipulated in article 207 that within six months of the entry into force of the treaty, the successor states (Poland, Romania, Yugoslavia, Czechoslovakia, Hungary and Austria) had to negotiate bilateral trade agreements, and the Reparations Commission could intervene to conclude them. Article 225 annuls all treaties, conventions and agreements signed by the Austro-Hungarian Monarchy with other states that had been a part of the Central Powers, and article 227 annuls acts signed by Austria-Hungary with Russia or Romania before 1914 or during 1914-1920.

Article 294 guarantees Hungary “access to the Adriatic Sea that”, in other words the freedom of transit on certain trade routes that crossed the Yugoslav state.