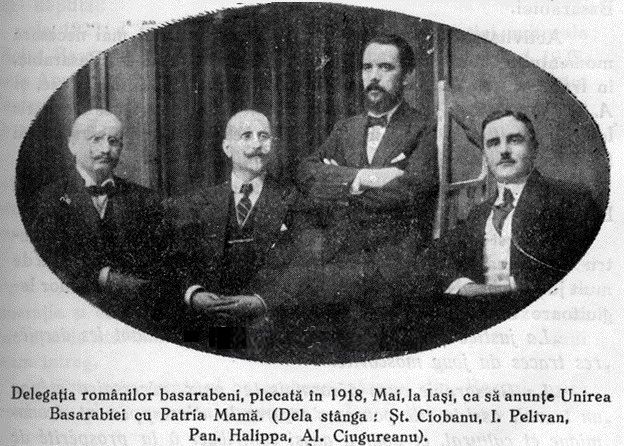 The Royal Decree promulgating the act of the union of Bessarabia with Romania, signed by the President of the Council of Ministers Alexandru Marghiloman, the Justice Minister D. Dobrescu and King Ferdinand I:

By the Grace of God and the National Will, King of Romania:

To all those present and to come, I wish you good health;

The Council of the Country of Bessarabia, in its meeting of March 27 (April 9), 1918, by 86 votes in favour, 3 against and 36 abstentions, voting the following resolution:

« On behalf of the Bessarabian People, the Council of the Country declares:

The Moldavian Democratic Republic (Bessarabia) within her boundaries between the Prut, the Dniester, the Danube, the Black Sea, and the old frontiers with Austria, torn by Russia a hundred and more years ago from the old body of Moldavia, in keeping with her historical and national rights, on the basis of the principle that the peoples alone decide their fate, unites today and for all times with its motherland Romania. »

And the President of our Council of Ministers declaring that:

« On behalf of the Romanian people and his king, H.M. Ferdinand I of Romania, takes note of this quasi-unanimous vote and declares Bessarabia united with Romania forever as one and indivisible. »

We promulgate this vote and this declaration and we order it to be invested with the seal of the state and published in the Official Gazette.

President of the Council of Ministers, A. Marghiloman