The re-entry of Romania in the First World War 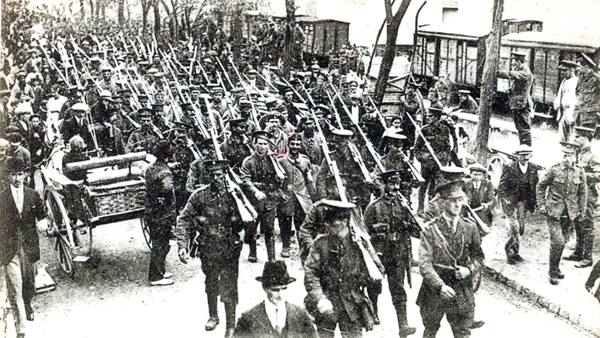 The military and economic power of the Entente was such that the fate of the war was finally decided in the second half of 1918. Tired of the war effort, the Central Powers began to ask for peace one after the other. The first country to request an armistice was Bulgaria on September 28, 1918, being defeated by the Allied armies on the Macedonian Front. The Ottoman Empire followed, signing the Armistice of Moudros on October 30, 1918 and then, on November 4, the Austrian High Command signed the Armistice of Villa Giusti in Padua.

However, forced by the early exit of Bolshevik Russia from the war, Romania had to sign a peace treaty with the Central Powers, even though King Ferdinand did not ratify it. Moreover, at the beginning of September 1918, the Romanian army still had about 170.000 soldiers and officers. Many Romanians were hopeful seeing the changing course of the war, wishing for the re-entry of their country into the conflict on the side of the Entente. That is why French General Henri Berthelot’s appeal to King Ferdinand for Romania to re-enter the war was viewed with high hopes. Some of the Romanian generals were quite sceptical in regards to the possibility of a rapid mobilization of the army. With one exception. General Alexandru Averescu advised King Ferdinand to change the Marghiloman government and immediately start mobilization, “so that general peace will find us weapon in hand and, if possible, with one foot on the territories we claim”. Time was no longer patient with those who were hesitant.

On November 5, 1918,  Prime Minister Alexandru Marghiloman asks King Ferdinad for permission to send soldiers from the 8th Division to Bukovina in order to maintain order in the province at the behest of the Romanian Council in Cernăuți. The same day, the Chief of the General Staff, General Christescu sent secret instructions to the five army corps commanders to mobilize the army. The next day, King Ferdinand dismisses the Pro-German Prime Minister Alexandru Marghiloman and replaces him with General Coandă, a close relative of Ionel Brătianu, who had negotiated in 1916 the entry of Romania into the war on the side of the Entente. On November 7, the German government decided to start negotiations for the conclusion of an armistice on the Western Front.

On November 8, Berthelot sent to King Ferdinand a message announcing the crossing of the Danube and called on the mobilization of the Romanian army: “I request in a most serious manner that the Romanian army be mobilized immediately. Later it will be too late”. On November 9, the Romanian government demanded the evacuation of German troops from its territories in 24 hours or they would be disarmed. The next day, Romania declared war on Germany, less than 24 hours before the armistice came into effect on November 11 at 11 am. Only six battalions of Berthelot’s army reached the Danube before the armistice was signed on the Western Front. On November 10, a French detachment crossed the Danube and was stationed in Giurgiu, being the first Allied unit that arrived in Romania since the signing of the Treaty of Bucharest in 1918. To delay the advance of the French, bridges over the Argeș River were blown up by the Germans. On November 12, when the official news that the armistice was signed on the Western Front, both sides halted military operations. Although hostilities with the Central Powers were now suspended, the Romanian army continued its mobilization to ensure the withdrawal of Mackensen’s army, the restoration of Romanian sovereignty in the areas formerly occupied by enemy troops, the entry into Transylvania and into the other regions promised to Romania by the 1916 treaty with the Entente.