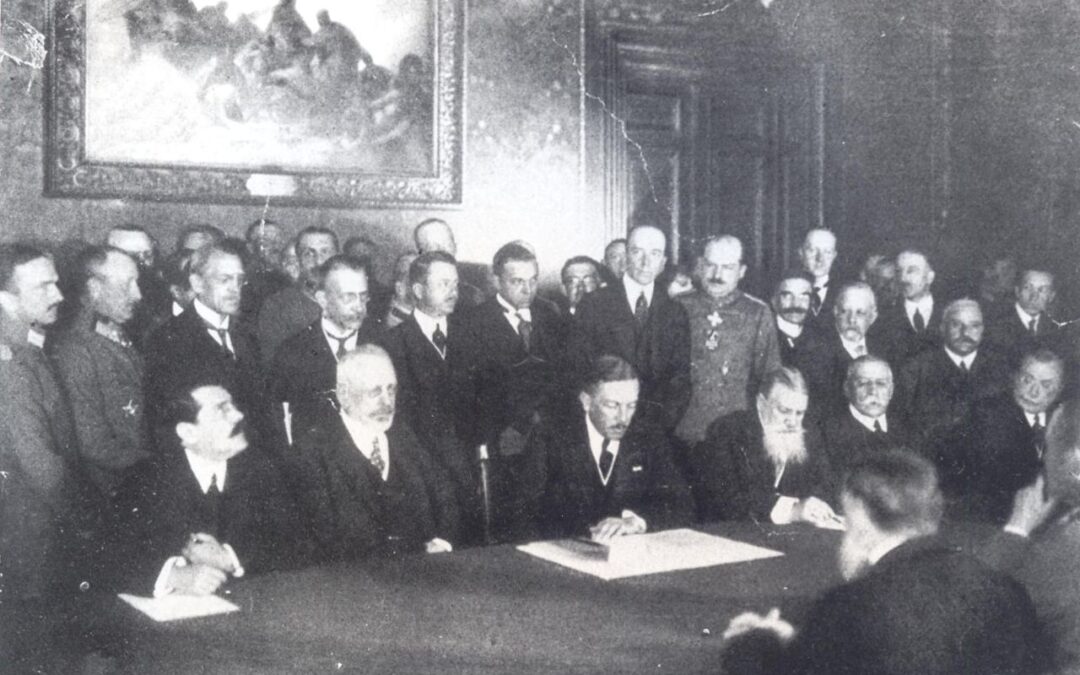 Lenin’s decision to conclude peace with the Central Powers directly affected Romania. The armistice led, among other things, to the dissolution of the Russian army, which meant that the Romanian army remained the only disciplined military force on the Eastern Front. Under these conditions Romania had no other option but to agree to the terms of the armistice, despite the expectations of its allies in Western Europe. When news reached French Prime Minister Georges Clemenceau, that the armistice with the Central Powers had been signed by Russia and Romania, he had a nervous breakdown.

Ionel Brătianu, the Romanian prime minister, in order to minimize repercussions and to protect the future of Romania’s relations with its allies, asked the Entente’s diplomatic representatives in Iași to send him a letter acknowledging the gravity of the situation. The fact that Romania, after having fought heroically to the limit of the impossible, was forced by the Russian “betrayal” to temporarily lay down the weapons shouldn’t have impeded the Allies in their commitments to Romania.

Here is what Ionel Brătianu said, according to the memories of the French ambassador in Romania, the Count of Saint-Aulaire: “«As you can see», Brătianu told us, showing us the wounds of his miserable country, «I have the enemy in front of me, around me, behind me, and even in my own country, preventing any means of communication with you, my only friends. What do you want me to do?» Because we didn’t think we were owed in such a manner as to answer with: «Sacrifice your last soldier», I and my fellow allies signed without question the letter requested by Brătianu. I had drafted it myself”.

The effect on public opinion

The Count of Saint-Aulaire reports that in Paris, Clemenceau, when he heard the news, raged against King Ferdinand of Romania, against Brătianu and against himself for signing the letter requested by Brătianu. It was obvious in Paris that Romania alone could not hold out against the Central Powers. Knowing this, why did Clemenceau react in this manner? The answer is also provided by the Count of Saint-Aulaire: “In Paris, and in all the capitals of the «great Allies», as was always in all democratic states, the events of the war were not judged for their importance on the ground, but for their effect on public and parliamentary opinion. First of all you need to have a good «communiqué». However, the Romanian armistice offered a catastrophic «communiqué», all the more so since the public opinion, deceived by the official optimism about the situation on the Eastern Front, was not prepared for such news. From the beginning of the war, it was the first armistice concluded by a sovereign ally, despite the clause that excluded any separate negotiations with the enemy. Instead of considering it, as common sense required, an inevitable consequence of the peace of Brest-Litovsk, Russia’s enormous treason was viewed with the utmost indulgence. In this case, does a great moral victory not compensate a military disaster? How can you consider that you’re just paying a high a price for the triumph of democracy in the world’s largest empire, but this Romania that keeps its king without revolution, what a scandal! But the fault is not mine. Why does the «Tiger», raging against me, asks for my head?”

There was another explanation, this time purely military in nature, but totally fanciful. In some military and political circles in France, the Allied leaders hoped to use the Romanian army as a hold out, a nucleus, around which to build an anti-Bolshevik coalition meant to continue the war in southern Russia. General Berthelot, the commander of the Military Mission in Romania, declared he was sceptical of this idea, but constrained by the orders he had been given, accepted to try the “impossible”.

Left alone on a huge front, the Romanian army could not resist a concentrated offensive of the Central Powers. Moreover, its supply lines were blocked due to the events generated by Bolshevik seizure of power and Russia’s consequent exit from the war.