The recognition of the union of Bessarabia with Romania 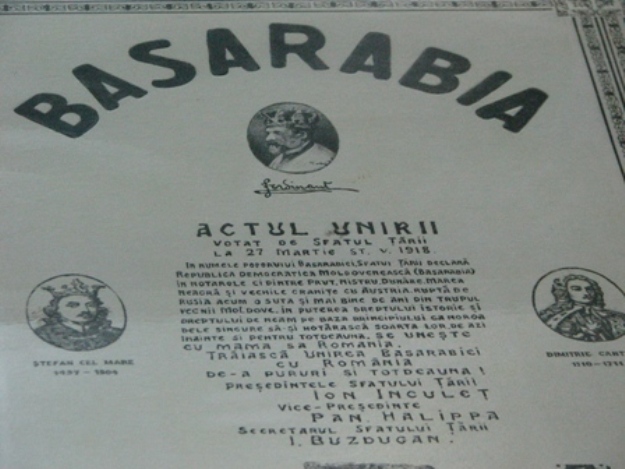 Bessarabia was the first province with a majority Romanian population to join with the Old Kingdom at the end of the First World War after it declared its independence from Bolshevik Russia and formed a separate state under the name of the Moldavian Democratic Republic. The act of the union, voted on March 27, 1918 by the Country Council, the parliament of the Moldavian Democratic Republic, was recognized internationally at the 1920 Peace Conference in Paris.

Bessarabia is the name of the eastern half of Moldavia, namely the territory situated between the Prut and Dniester rivers annexed by the Russian Empire in 1812, following the Treaty of Bucharest. At the end of 1917, the Moldavian Democratic Republic was formed, which proclaimed its autonomy within the Russian Republic. Later, after the October Revolution, Bessarabia declared its independence from Bolshevik Russia and, after several months, on March 27, 1918 [N.S. 19 April, 1918], the union with the Kingdom of Romania.

When the war ended, Romanian leaders were faced with a dilemma: to seek the recognition of the unification of Bessarabia with Romania through direct negotiations with the Soviets, or to exclusively seek the guarantee of the Western powers. Negotiations with the Soviets proved extremely difficult. As early as January 1918, following the arrival of the Romanian army in Bessarabia, Constantin Diamandy, the Romanian ambassador in Petrograd was arrested, and the Council of People’s Commissars announced the decision to unilaterally break diplomatic ties with Romania and confiscate the Romanian Treasure deposited in Moscow. Because of these divergences with the new Soviet power, Romanian politicians relied on the support of the Western powers for the recognition of the unions of Bessarabia with Romania.

The legitimacy of the unification of Bessarabia with Romania was recognized at the 1920 Peace Conference in Paris. On October 28, Romania signed the Treaty of Paris with Britain, France and Italy. Japan signed this document two days later, because the Japanese representative was in Brussels. The treaty was ratified on May 19, 1922 by the United Kingdom on May 11, 1924 by France and on 7 March 1927 by Italy. Japan did not respect its commitment, in the wake of the Soviet-Japanese settlement of 1925, concerning Sakhalin Island, when the Japanese agreed, through a secret agreement, not to ratify the treaty regarding Bessarabia.

The treaty stipulated that “in the interest of the general peace in Europe, a sovereignty must be ensured in Bessarabia now to meet the aspirations of the population and to guarantee to the minorities of race, religion or language the protection that is desired”. The signatories acknowledged that “from a the geographic, ethnographic, historical and economic point of view, the unification of Bessarabia with Romania is fully justified” and that “the population of Bessarabia expressed the desire to see Bessarabia united with Romania”.

According to the Treaty of Paris, “the High Contracting Parties declare that they recognize Romania’s sovereignty over the territory of Bessarabia, comprised between the current border of Romania, the Black Sea, the course of the Dniester River from its mouth to the point where it meets the old border between Bukovina and Bessarabia, and that old boundary”. Also, the signatories stated that they “will invite Russia to adhere to the present Treaty as soon as a Russian Government recognized by them shall be in existence. They reserve the right to submit to the arbitration of the Council of the League of Nations all questions that the Russian Government may raise respecting the details of this treaty, it being understood that the frontiers defined in the present treaty, as well as Romania’s sovereignty over the territories therein comprised, cannot be called into question”.

The Soviet Union never recognised the unification of Bessarabia with Romania. The effects of the union were cancelled in 1940, when the Red Army occupied Bessarabia, northern Bukovina and Hertza region. The Soviet Union annexed these territories as a result of an additional secret protocol to the non-aggression pact with Nazi Germany (the Ribbentrop-Molotov Pact). Romania gave up Bessarabia without a fight, with the province being occupied by the Red Army in 48 hours, as the administration and the Romanian army was forced to withdraw to the west of the Prut River.