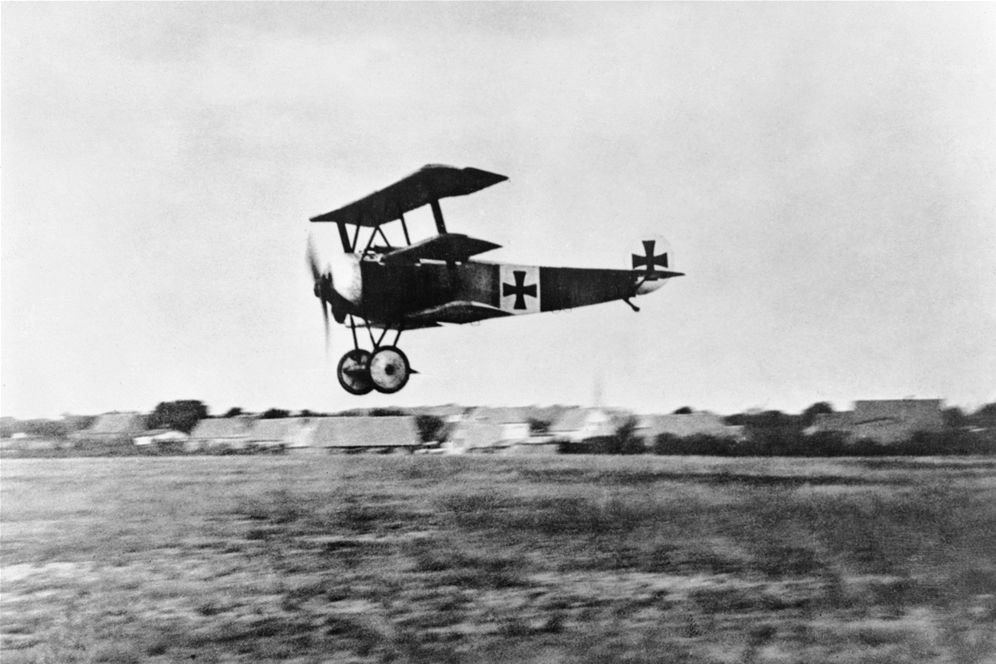 Manfred von Richthofen (1892- 1918) went down in history under the nickname of the “Red Baron”. The leading ace of German aviation, Richthofen was the most celebrated aviator of the First World War: in less than two years he had 80 confirmed kills, and it was during an air duel where he eventually met his demise: in April 1918, he was struck in a hail of bullets and died soon afterwards.

Nicknamed by his comrades, but especially by his opponents, the “Red Devil”, the “Red Baron”, “Little Red” or the “Red Knight”, Manfred von Richthofen still remains an aviation legend. When the First World War ended, he scored the most victories in air battles: he had shot down 80 enemy planes (some even say 81). French captain René Fonck came in a close second with 75 planes shot down. However, the two never met in battle.

The indisputable hero of German fighter aircraft was born on May 2, 1892 in Breslau [today Wroclaw, Poland] and died on April 21, 1918 at Morlancourt, between Vaux en Somme and Amiens. He was only 26 when he perished under the fatal blows of British aviation and infantry. But they buried him with military honours, in reverence to the memory of a formidable opponent.

The young Freiherr [a title held by the nobility often translated as “baron”] Manfred von Richthofen began his military service in 1911, at first as a cavalry officer, lieutenant, then captain of a cavalry regiment. However, his career as a cavalry officer lasted only until 1915, when he chose the path that would bring him glory- aviation. Von Richthofen’s affinity for cavalry was shattered completely on the battlefields of the First World War, where cavalry charges proved to be completely useless in the face of the new weapons of the era- the machine gun, the aircraft, and the tank.

He first piloted bomber aircraft, and only afterwards flew on fighter aircraft, when Oswald Boelcke took him under his wing. In the autumn of 1916, the young aristocrat met the famous Oswald Boelcke, the German pilot who had already shot down no less than 40 enemy aircraft. Boelcke was looking for young talents for his new Jagdstaffel 2 team, and Manfred immediately caught the eye of the experienced aviator. Von Richthofen would prove to be an exemplary pupil, eventually taking his place at the head of the Boelcke Squadron after his death in October 1916. Ever since, he followed the military tactics he learned from Oswald Boelcke to the letter:

1. Ensure that you have every advantage on your side, flight speed, altitude and position so that always during the attack you have the sun at your back blinding the opponent.

2. If you started an attack follow it through to the end.

3. Fire the machine gun only when you have a clear shot and when near the opponent.

4. Never lose sight of the enemy.

5. When you are attacked into a dive, do not flee but fly to meet the opponent.

6. Do not go into enemy territory, during the fight you risk being shot from the ground.

7. The attack is to be essentially done only in groups, with a group consisting of 4 to 6 planes.

One of the first aviators shot down by the Red Baron was Lanoe George Hawker, a famous British pilot. The duel was described enthusiastically by von Richtofen in his diary: “I’m only a few meters behind him. He doesn’t have a chance; the machinegun fires its bullets until it jams. Then starts firing again. It jams again; saving his life, only to prolong his agony. The back of his head was struck by a bullet, almost beheading him. His plane crashed into the ground; the machinegun was thrust into the earth standing almost vertically. Today the machinegun decorates the entrance of my family castle in Schweidnitz. I am impressed to tears, Hawker was a brave man, an athlete and an exceptional fighter”.

As the war intensified, aviation grew more and more important, as was the role of the “Red Baron”. Six months after his appointment as head of the Boelcke Squadron, von Richthofen had already shot down 31 Allied planes. He continued much in the same way for the next two years, when, on April 21, 1918, during an aerial battle with Canadian Arthur Roy Brown he lost his life. Recent evidence shows that the legendary “Red Baron” was shot but he did not die in the crash itself, as he managed to make a rough landing with his plane, but afterwards, due to the bullet wounds.