The refugees of Muntenia in Iași. The terrible winter of 1917-1918: there was no more wood, not even for coffins (Part 1) 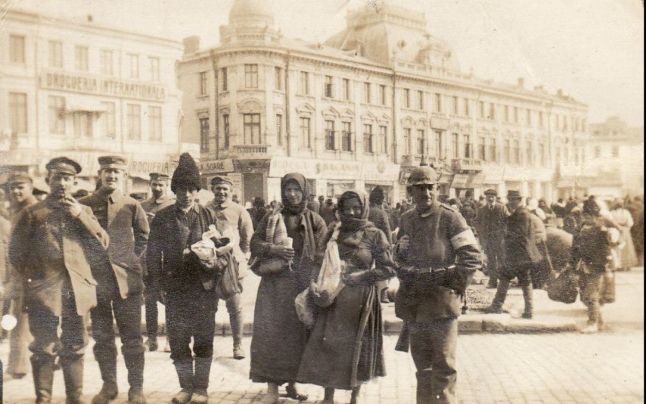 The imminent occupation of Bucharest by the armies of the Central Powers at the beginning of November 1917 forced the Romanian authorities to leave the capital and to move the state institutions, the Government, the Parliament, the Royal House, to Iași. In addition to the authorities many civilians left their homes and headed to Iași and as a result the population tripled in just a few months.

However, the withdrawal was totally unorganized, in an atmosphere of panic, as many of those who lived through it noted in their memoirs and journals. Among them, Elena Th. Emandi: “As the foreign invasion began […] cities and villages were emptied, and thousands of people, men, women and children, left their homes and all their possessions, fleeing in horror. The people were struggling through the stations to catch the trains that were so full that often children would die and the bodies had to be thrown out the windows. When they no longer had a place inside, the poor people climbed wherever they could, on the roofs and stairs of the wagons, clinging on locomotives, hanging in the wind, that you wondered how they didn’t fall”. Those who were not able to get on the trains “came down from the far reaches of Oltenia and Muntenia, with ragged clothes, boots torn to pieces, barely crawling through the rain and mud.”

Arriving in the city, after a long and gruelling journey, the refugees “wandered in the streets of Iași, starving, barefoot and almost naked. There were days when 200-300 refugees came to the police saying they did not have a home, spent the nights in wagons that were stationed in the train station, in the buildings of the city hall, in cafes, in the corridors of various institutions. The biggest contingent was made up of workers from factories in Bucharest, Ploiești, Craiova, by the youths evacuated from the villages and the school youth”.

Only the more wealthy people managed to find a home or a host, while the poorest were left to the authorities who were barely holding things together: “Because the pressure from the refugees mounted, the decision was made to arrange spaces for them in hotels, restaurants, warehouses, etc. belonging to merchants and industrialists, and even in the buildings of institutions such as the City Hall, the Court of Appeal, in tribunals, which had to move their headquarters. Thus, the City Hall was forced to leave its own building and huddle up its over one hundred clerks in about six or eight rooms”.

The people of Iași looked with reluctance to the wave of refugees- Constantin Argetoianu noted: “It is undeniable that Moldavians, in general, and the people of Iași, in particular, considered us, the refugees of Muntenia, as a nuisance- and it was natural to be so, because our arrival in Iași, in particular, took shape and the aspects of an invasion. Nothing had been prepared, nothing was organized, so the flood brought forth by the trains in the station had engulfed the city as if it was conquered. By a natural reaction, people barricaded themselves in their homes and in their selfishness, afraid of being overwhelmed and thrown out of their homes, precisely at the time when they too expected hard times. Everyone defended their homes and provisions, and the doors, barely cracked, did not open, not even to friends. But as soon as the torrent of people state settling down, as soon as the danger of expropriation calmed down, the people of Iași began to be more welcoming, and eventually proved that Moldavian hospitality was not a scarce word”.

Difficult life in an overcrowded city

Another witness of those times, N.A. Bogdan described the precarious situation of the unfortunate refugees, forced to endure cold and hunger in the streets of the city: “On any main street and back alley, groups of people of all classes, carrying in their hands or on their backs different kinds of bundles, suitcases, chests or children, were going right and to the left on the sidewalks, as well as through the streets, among horses and carts, without knowing where to go and what to do. Every minute or so they would stop one another, and inquired about the way they needed to go or where to stop, where you could find a host or someone with authority, a passage way or shed, so that they would at least sit for a couple of minutes to rest their legs or to stretch their arms of the weight of the luggage or of that of the children they were carrying on their backs, without any of those who were asked being able to give the clarification or satisfaction to those who inquired. The sergeants, policemen or military men, who seemed to be able to give the explanations and comfort to each traveller, were either always in a hurry, tasked with other things, rather than doing the cicerone, or… they themselves did not know more than the miserable puzzling guests of Iași”.

In an article in the newspaper Opinia [The Opinion] the case of a 17-year-old is presented, who, on a terrible cold, stood shrivelling on one of the central streets of the city “dressed only with a summer blouse, with thin pants and summer slim hat on his head and shaking and shivering”. Asked why he was not going to ask for asylum at the City Hall or the Police he replied that “«I already was and I couldn’t find neither shelter nor food», and he started crying.”