The refugees of Muntenia in Iași. The terrible winter of 1917-1918: there was no more wood, not even for coffins (Part 2) 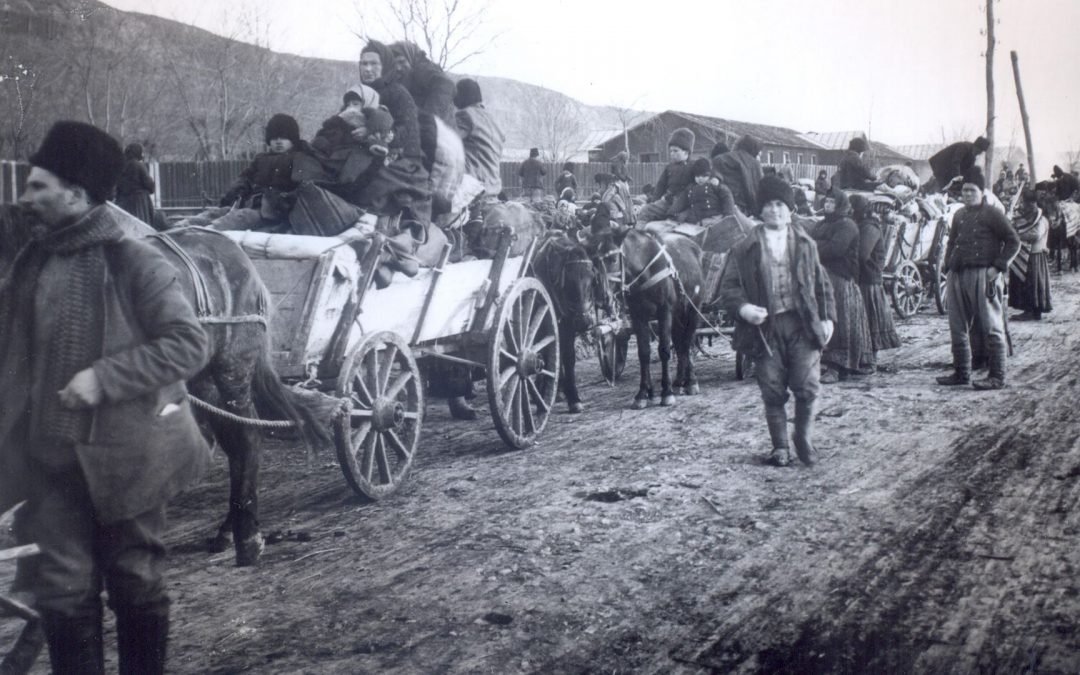 “Every house was barged in, there was banging on the doors…”

The houses were all already crowded, so even those who were rich could hardly find shelter: “Many rich people, that lived until then in palaces with countless servants at their disposal, wandered the streets for days, searching for a house, and were forced to settle with a room or two, in what knows slum, to live in the cold, washing their own clothes and eating only beans”. “At private homes, of any kind or size, all the rooms were filled from the first moments; owners or tenants began to pile everyone as they could in fewer and fewer rooms, so at some point some people were forced to bring in their parents and children and servants and even domestic animals in their homes […]. Taverns, which were rare in the city in normal times, had become even more rare this time, with the immeasurable inrush of uninvited guests- but especially because of the almost total lack of food, and mainly of bread or polenta”.

In an attempt to shelter the refugees, the authorities applied extreme measures: ” Every house was barged in, there was banging on the doors not only with fists or with batons, but also with boulders, the hinges or the windows were shook, some doors were pulled off all together from the screen and two or four, sometimes even twelve unknown guests were installed in the houses of private citizens no matter if it was room or not”.

However, many refugees were still without shelter and hungry: “On the streets, at the doors and at the gates of the houses in downtown, as well as in the slums, livid figures and trembling hands demanded, either through words or by gestures, a piece of bread or pudding, or a day or two to stay, at least to warm themselves up for a spell”. At the mayor’s office there was a space, but it was small and was without any comfort: “Here, on a platform made of planks placed from one end to the other of the room […], all the grateful customers of the communal hostel were installed, placing them across the hollow board divan, because the communal doctors, in the inspection of this place, had decided not to leave there neither straw nor branches to prevent, God forbid! The spreading of some contagion”.

“No one ate according to their needs, we were all reduced to fasting”

Queen Marie wrote in her memoirs that “the city was packed, with a population ten times larger than the usual one, epidemics are unleashed from all sides, food is getting scarce, supply is almost impossible, there are no horses, the remaining few are dying, for we have no food for them”. Minister I.G. Duca also presented the grave situation that the city found itself in, confessing that “the rest of Moldavia supplied Iași, but the situation was very critical, the problem was the lack of the means of transport. Provision were getting scarce, except for the Russians, a few well-supplied farms, or some landowners whose estates were near Iaşi, no one ate according to their needs, we were all reduced to fasting”. Constantin Argetoianu invoked even the lack of soap, which generated the rapid spread of typhus: “By May, when supplies came from Russia, we ran frantically to find soap, and the lucky ones, who had a piece, would wear it all day in their pocket, fearing that someone would steal it”.

One of the biggest problems faced by the City Hall was the supply of wood in the conditions of a very cold winter. Some witnesses said that “12-15 degrees below zero were common and that’s why it seemed to us… gentle, because there were times when the temperature reached -30 and it lasted longer than the usual than three days, as was the case of all winters until now, as well as with the strong winds that have also done their duty”. I.G. Duca referred to this difficult situation, pointing out that “the problem of wood was also deplorable, the cold was constant and the wood was all but gone. With the train you could not bring anymore, the carts were all requisitioned by the army. There were no close forests and the needs of the population demanded for the trees to be cut from the public gardens and streets. We took measures with the army to supply the town from the forests of the king at Peoni, we even managed to get some wagons that the new mayor Tomida personally took care of to bring them from the Podul Ilioaiei, and so the crisis was partly alleviated. However, two beauties of Iaşi were sacrificed on the altar of the people, the Copou forest and the Rivalet Park. Secular trees were felled in those days under the ruthless axe of a city that indeed besides the misery of evacuation, sickness and hunger, had to face a tormenting cold”.

The cold took the lives of poor refugees daily, according to the testimony of the ambassador of France in Romania, the Count of Saint Aulaire: “In the morning, going to the office, I saw dumpsters that were taking away the dead bodies frozen to death from the sidewalk. Often there was among them a mother’s body with her new born baby. Because of the lack of shelter, a new wave of refugees was laying on the same sidewalks, human wrecks that the next day would be turned into a new batch of buried corpses, that like those previous would be buried in a common pit. The cult of the dead, so alive in Romania, was now reduced to a sanitation operation”.

The stationed soldiers in the city destroyed the fences of the churches and cut down the tress from the public gardens to warm themselves. The mayor addressed the police to take action against the soldiers who had “cut the trees in the Coop public garden” asking them “to give orders and to send gendarmes for a few days to stop the felling of trees…”. The gendarmerie commander is also asked to “guard the Bahlui bridge, called the Red Bridge, in the Palat Street, because the soldiers and the destitute population have begun to destroy it to obtain firewood”. The lack of wood made it difficult to make the necessary coffins for people to be buried. The City Hall sent an address to the Minister of War asking for the situation to be resolved: “Because there are no more planks for coffins, we are forced to bury the death without them, so we ask, with respect, that you deign to send the needed material to the funeral pump entrepreneur”.