The refugees of Muntenia in Iași. The terrible winter of 1917-1918: there was no more wood, not even for coffins (Part 3) 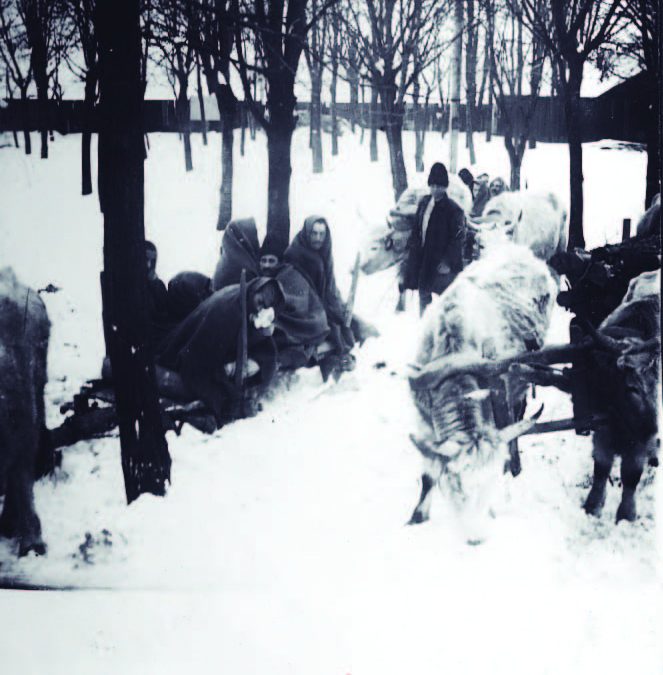 The outbreak of typhus

Due to crowding in insalubrious spaces, the lack of hygiene and shortages of all kinds, in the winter of 1917, the outbreak of typhus rapidly erupted and spread. So, the refugees and locals, they all had to face a much greater danger than the enemy armies: because of the poor conditions in which they lived and the lack of care, the contaminated were condemned to an almost certain death.

Constantin Kiriţescu said: “As if the severe winter, the famine, the lack of fuel, of clothing and the means of transport would not have been enough for this miserable country and its wrecked army, a new calamity, more terrible than all the others, took hold of Moldavia: a typhus epidemic. The shortages of all kinds prepared its way. The military and refugee convoys had filled the towns and villages. The houses were crowded; people were piled one over the other as many as they could fit in one room. Hospitals could no longer take in anyone. Two or three sick or injured people were in a single bed and others were laying on the floor, without even a straw bed, a quilt or care. The railway stations were full of wounded and sick that were in agony, waiting for trains that did not arrive or who could no longer leave. In the cold of -20 to -25 degrees, the human body could not withstand the cold, the starvation, the wounds, and perished, and when death did not come as a result of starvation, cold or gangrene caused by wounds that were not tended to or operated, the weakened body, a living corpse, became suitable for the spreading of disease. The dirt could not be obviated; it would pile up in the dwellings and on the body of men. What could the cleanliness be kept, when there was no laundry, no fire, no oil, no soap? As a result, the parasites multiplied; soon they moved all over the place: through the houses, the wagons of the trains, the carriages, and especially the rags of the people. It was impossible to avoid them. In the scourge cortege, lice were the inseparable companions of misery. Together with typhus, recurrent fever made its appearance, which, if it does not kill the victim, it weakens and destroys all the strength that is in the human body. The two epidemics, in particular typhus, helped by overcrowding and by the promiscuity of the population, by its debility, lack of means of prevention and control, have spread until they have taken catastrophic proportions”.

The epidemic ravaged the poor: “Extremely hard living conditions for at least 90% of the inhabitants of the former capital of Moldavia had, as an immediate effect, illness and, very often, the death of the ones incapable to resist, which were the overwhelming majority. The civilian deaths greatly increased the number of similar losses caused by the actual war on the front, where many soldiers died of typhus and, in very small numbers, of recurrent fever, diseases that were previously somewhat unknown, and in any case specific to the war. I happened to see almost daily, even on Lăpușneanu Street, huge trucks loaded with corpses, which were one on top of the other and even though they were covered with tarps, you could see a leg or hand hanging over the edge of the truck crate”.

The most affected by this plague were, of course, the poor refugees who could not maintain even the most elementary hygiene since they had only one row of clothes with which they had left. Due to the high number of deaths, the administration of the cemeteries did not even bury them, so the lifeless bodies remained with the cemetery days: “Once they arrived at the cemeteries, the human remains were placed in mortuary chambers, just like wood in a pile and when there was no more room to hold all the bodies, they were deposited on the empty land around the mortuary house; for burying them did not come easy; The City Hall did not increase the number of gravediggers at the cemeteries, and the military authorities, only occasionally, sent a platoon of men to dig long but shallow ditches- where the human remains waited for their turn, sometimes for up to ten or even twenty-five days, to be placed in their final resting place”.

Sights of horror on the streets, in hospitals

The hospitals in Iași were inadequate to care for patients affected by typhus. Many of them did not reach the hospital and died in the streets: “The sick and the dying were left in the streets or in the train stations. Hospitals in Iași have become such a terrible hell that some doctors were afraid to even enter their pavilions”.

Argetoianu described the tragedy of the situation in Iași: “In the city, the hospitals were full; there were special lazarettes that were full. Car-trucks loaded with sick people were leaving the station, wandered from hospital to hospital as they could not be unloaded anywhere, because there was no place. Riding around the city with this load of dying people revolted the people, who were in the streets in search of food or news. Every once in a while, you met a wretch on the floor, green in the face like the patched-up mantle he had on his back, with a stick in his hand and a bag on his shoulder, leaning on others that were barely hanging on. They were advancing in small steps, no one, not even them knew where, until one collapsed and remained forever in place […].”

The Count of Saint Aulaire wrote in his memoirs: “In this overpopulated, under supplied, devastated Moldavia, misery and famine, from which typhus is born, made more casualties than the enemy’s fire. In hospitals that refused to receive any more people, everything was lacking except devotion. There were shortages of wood, laundry, bandages, surgical instruments and anaesthetics. The wounded and the sick begged the nurses to put an end to their sufferings, to kill them. The screams of pain drowned out the moans of the dying”.

Queen Marie, who visited the hospitals almost every day, notes in her diary: “there is no wood in the hospitals, there is not enough food, the danger for an epidemic is great because the injured are not sorted after a clear order and the infectious are hospitalized with the others. Due to the lack of wood for heating, the wounded get sick of the cold and die of pneumonia, they cannot wash their clothes, they cannot cook- everything has fallen into an endless and complicated despair”. At the Frumoasa hospital for eye diseases, the situation was critical: “In a space for 300 patients, 700 were crowded, in troughs like stables, with no ventilation, with muddy flooring, with beds on top of each other, with no light in sight; in that place there were those unfortunate souls, with terrible eye diseases, not to mention all forms of typhus. They had no place to isolate them, no sanitary facilities, the situation was deplorable and dangerous, but this too, with little order and goodwill from the authorities, could improve”.