The remobilization of the Romanian army in the autumn of 1918 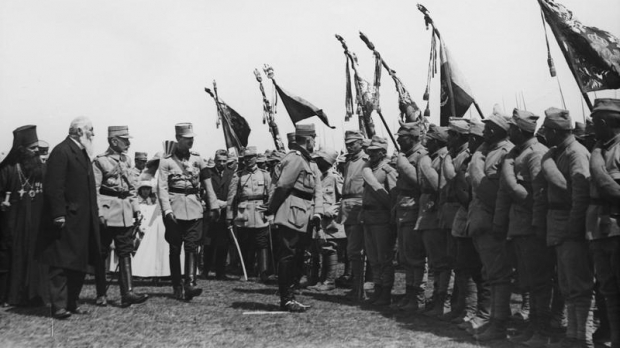 Even though Romania was “temporarily” knocked out of the war by the Treaty of Bucharest, which was signed on May 7, 1919, King Ferdinand and his entourage closely followed the evolution of the fighting on the Western and Macedonian fronts. Romanian generals prepared for the re-mobilization of the Romanian army and its re-entry into the war.

Forced by Russia’s exit from the war, Romania also concluded a separate peace in May 1918 with the Central Powers. The peace, although it was ratified by Parliament, was never promulgated by King Ferdinand of Romania. Moreover, Romanian generals were increasingly attentive to the evolution of the military confrontations on the Western Front.

The Second Battle of the Marne in the summer of 1918, the fact that thousands of US soldiers arrived every day on the French front, and the failure of the Piave offensive, were signs that the Entente will ultimately win the war. On September 15, General Louis Franchet d’Esperey launched the long awaited Allied offensive on the Macedonian Front, which was a success from the start. On September 28, the Bulgarian High Command requested an armistice. One day later the armistice was signed and Allied troops were allowed free passage on the territory of Bulgaria. Soon the Romanian Front was going to established on the Danube so it was no wonder that these developments were followed with lively interest in Romania.

The first preparations for mobilization

Since the Second Battle of the Marne, the Chief of the Romanian General Staff, General Constantin Christescu, and a few subordinates, deliberately delayed the demobilization of the Romanian army following the signing of the Treaty of Bucharest. The best soldiers and officers were kept. In September, around 170.000 soldiers and officers were still under arms, with almost 50.000 more than agreed by the treaty. Regarding disarmament, the Romanian command chose to hand over to the Central Powers only obsolete weapons and those that no longer had ammunition. This allowed about 60% of the existing arsenal, consisting of modern weapons, to remain in the hands of Romanian soldiers. The armament was sufficient for nine divisions, and there was ammunition for 15 to 20 days of combat. With King Ferdinand’s approval the preparations were kept hidden from the eyes of Prime Minister Alexandru Marghiloman who was convinced that Germany would win the war. Following the defeat of Bulgaria, Christescu ordered a swift implementation of the plan to remobilize the Romanian army. It was agreed in the first phase to mobilize the divisions in Moldavia and Bessarabia, and in the second to mobilize the Romanian soldiers in Wallachia.

During September and October, German intelligence services received reports indicating that Romanians were preparing for mobilization. “The Information Service of the Romanian General Staff has lately carried out a very sustained activity in the occupied area of ​​Romania”, a report submitted to Mackensen by the German intelligence services showed. After Bulgaria concluded the armistice with the Entente, more and more Romanians demanded the mobilization of the army and the liberation of Bulgarian occupied Dobruja. Even Marghiloman proposed to the Germans that a mixed Romanian-German contingent should occupy Dobruja. The Germans showed a certain availability for this variant, but they asked Romania and in particular King Ferdinand to ratify the Treaty of Bucharest. Ferdinand refused and asked Marghiloman not to make any commitment to the Germans. The King awaited the Allied army from Thessaloniki to approach the Danube in order to begin to liberate Romania.