The reorganization of the Romanian army in 1917 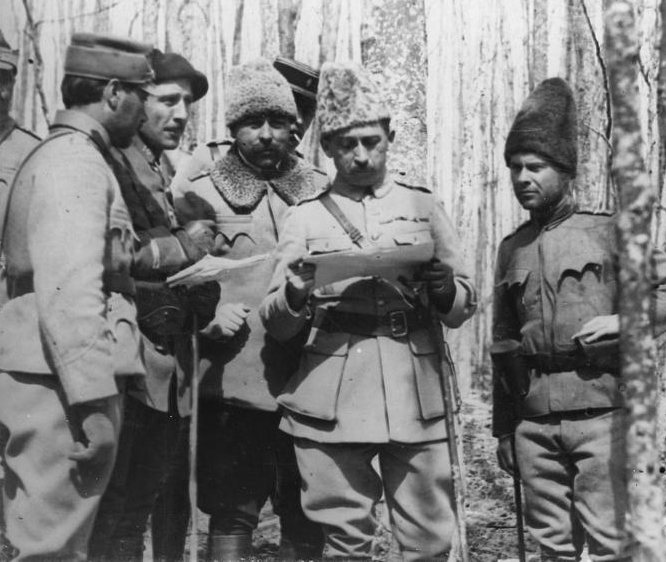 Can an army be rebuilt after losing 60% of its forces in just three months and two-thirds of the territory it defended? To this question the decision-makers of the Romanian state had to answer, but also the allies of the Kingdom of Romania, at the beginning of 1917.

The Romanian army’s fighting capability was almost annihilated after three months of hard fighting. The remaining units of the Romanian army that had entered the war in August 28, 1916 were in full retreat to the Siret river where the front would eventually stabilize during the winter. Of the 505.000 soldiers and officers that were mobilized in August 1916, only 194.945 (39%) were accounted for in Moldavia. On January 1, 1917, the Romanian state comprised a third of its former territory.

The most difficult task in those days was the reorganization and the strengthening of the army. The Romanian soldiers tired of so many struggles, by the forced and exhausting withdrawal to Moldavia, were arriving in the villages of northern Romania in a disorganized manner. These difficulties were exacerbated by the harsh weather conditions of that winter. The evacuation took place during blizzards on roads hundreds of kilometres long.

The remnants of the army that managed to retreat to Moldavia were divided into two. The Second Army comprised six divisions and remained on the battlefield in the Vrancea region, being settled between Russian army units. The rest of the divisions were taken to the back of the front, in northern Moldavia for reinforcement and reorganization. These units would the building blocks of the First Army. But in order to organize and rebuild the army, it took several weeks for the scattered, starved and frozen soldiers to be assembled in Moldavia and sent to the reorganization areas. This only ended at the beginning of February 1917.

The reorganization took into account the resources of the moment, but also the fact that a long campaign was announced. This reduced the total number of divisions to 15 infantry and two cavalry divisions. The divisions were grouped into army units with their own command units. For the duration of the reorganization, five army units, consisting each of three divisions, were organized. Army corps were grouped into armies and the number of corps that constituted an army was dictated by operative requirements. The armies also had in their composition: cavalry, heavy artillery, pontoons, aviation units, etc. The First Army was made up of the First, Third and Fifth army corps, and the Second Army from the Second and Fourth Corps.

The number of infantry regiments was set at 80. Regiments 1 through 40 were full regiments, and those from 40 to 80 were combined two by two. The resulting 60 regiments were composed of three battalions each, plus another 10 regiments of two battalions of mountain hunters each and a brigade of border guards of two regiments. The divisions consisted of four infantry regiments, grouped into two brigades. Each division also received a battalion of pioneers and an artillery battalion.

Artillery consisted of 15 regiments, consisting of nine batteries each with four cannons, and 15 regiments of howitzers of four batteries, but reduced to two (105 mm and 120 mm) due to the lack of material. The heavy artillery was directly attached to the army corps, consisting of four regiments with two divisions of 120 mm long cannons and a 150 mm division. Within the artillery, two divisions of mountain artillery and antiaircraft artillery were also active. Most of the cannons that were received came from France and represented modern, superior weapons over the ones with which the Romanian army had begun the war.

The cavalry was formed in two divisions composed of six regiments each. Cavalry troops were formed from detachments of cyclists and motorcyclists. A regiment of royal escort completed the cavalry.

It was in the field of aviation that the greatest progress had been made. Nearly non-existent at the beginning of the war in the Romanian army, the air force was now composed of 12 squadrons, equipped with Farman, Nieuport, Caudorn airplanes and a Breguet-Morane bombardment squadron. The staff were both French and Romanians trained by members of the French Military Mission.

The most difficult to reorganize was the First Army. Each division was made up of the remains of all the units that had been part of it when it was mobilized, to which there were added contingents of recruits from 1917 and 1918. The divisions were grouped into army corps and each had its own region assigned.

The Third Army Corps, consisting of the 5th, 13th and 14th divisions, was stationed in Botoşani and in the vicinity of the city. It was the first to be reorganized and it was ready to fight in early June.

The Fifth Army Corps, which comprised the 9th, 10th and the 15th divisions, was stationed in the Vaslui region and was operational at the end June.

The First Army Corps, which comprised the 2nd, 4th and 11th divisions, was reorganized in the area surrounding Iaşi and was the last to complete its reorganization.

The reorganization of the Second Army was done on the front, under special circumstances, and under the close coordination of General Averescu. The army consisted of two army units, the Second Corps, consisting of the 1st, 3rd and 12th divisions with its headquarters in Coţofăneşti and the Fourth Corps, consisting of the 6th, 7th and 8th divisions with its headquarters in Onesti. Many of its divisions, however, had low combat capability. For example, the 12th Division had only 2000 soldiers after the withdrawal. For their recovery, the units were taken to the back of the front for a month, in rotation, for reinforcement, training and rest. But some troops, and especially artillery, were reorganized on the front, under enemy fire.

When the reorganization of the Romanian army was completed, combat strength reached almost 400.000 men.