The road to self-determination of the Moldavian Democratic Republic 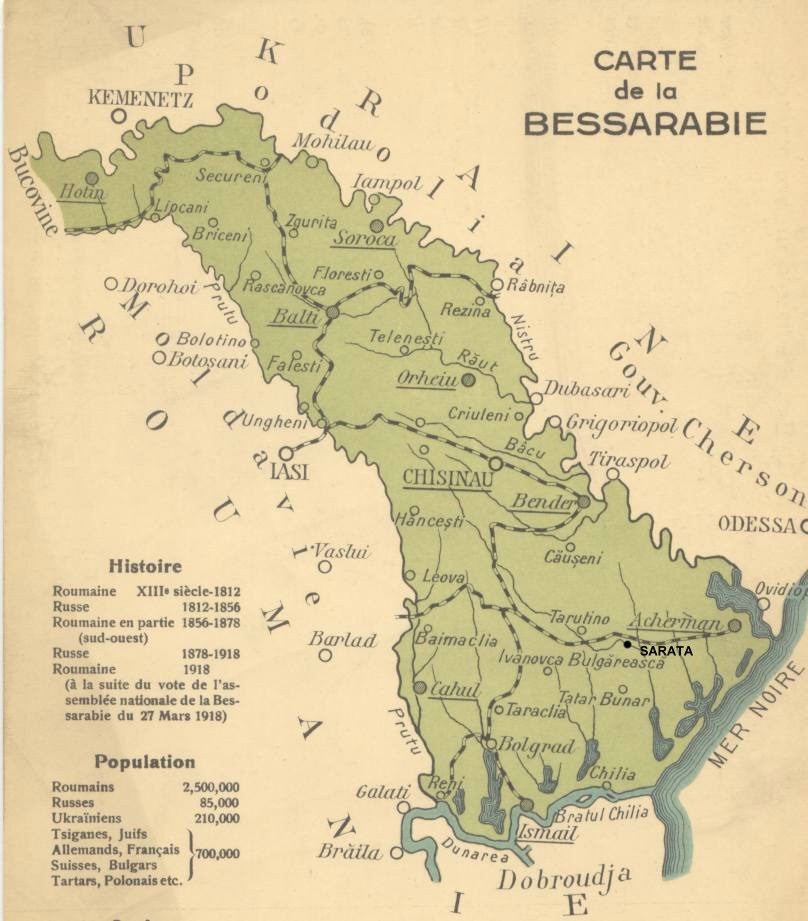 May 16, 1812. By the Peace Treaty of Bucharest between the Ottoman Empire and the Russian Empire, half of the Principality of Moldavia is annexed by the tsar under the name of  Bessarabia. What followed was more than 100 years of forced russification of the inhabitants of this territory. The outbreak of the February Revolution in 1917 in Petrograd and the collapse of the Russian Empire offered a chance to the Romanians of Bessarabia, as well as to the other peoples that were at the empire’s periphery, a chance to save their national identity.

The first step towards a self-determination of the Romanians in Bessarabia was made at the end of March and the beginning of April 1917, in Chișinău, with the establishment of the Moldavian National Party. The program set forth by the party envisioned for the Moldavians (Romanians) in Bessarabia: the acquisition of citizens’ rights and national rights, a wide autonomy, domestic laws that were to be adopted by a Country Council, education and religious services to be held in the Romanian language, agrarian reform etc. The leadership of the Moldavian National Party was composed of a committee made up of renowned public figures from Bessarabia, such as: Vasile Stroescu, the president of the party, Pavel Gore, Onisifor Ghibu, Pantelimon Halipa, Vladimir Herța, etc.

In April 1917, the Priestly Congress of Bessarabia also takes place, where it was decided that religious services are to be held in Romanian. At the Teachers Congress in Bessarabia (April 10-13, 1917), the decision was taken that the pupils are to be schooled in their mother tongue – Moldavian (Romanian). The use of the Latin alphabet was adopted at the next Congress of Bessarabian teachers (25-28 May, 1917). The words spoken by the writer Alexei Mateevich at this Congress will remain in history: “Yes, we are Moldavians, we are old Moldavians, but we are part of the great Romanian people living in Romania, Bucovina and Transylvania. (…) We do not have two languages ​​and two literatures, but only one, the same as that over the Prut.”

All these measures had broad support among the population of Bessarabia, but also among the Bessarabian soldiers stationed in the garrison of Odessa. Besides, the Bessarabian soldiers in this city would show their support for the Moldavian (Romanian) language and for their self-determination, by organizing a huge rally that was attended by more than 10,000 soldiers in Odessa on the 18th of April 1917/1st of May 1917. A few days later, on the 14th of May, in Odessa, the Executive Committee of the Bessarabian soldiers was established, which decided to organize national military units. The Moldavian Students’ Congress followed on the 20th of May 1917 where it requested that the Romanian language be used in education and the adoption of the Latin alphabet. At the same time the first Peasant Congress of Bessarabia was taking place, calling for a large agrarian reform. In the autumn of 1917, a series of Latin textbooks were adopted to be used in schools: Abecedarul lui Gurie, Ștefan Ciobanu’s Cartea de citire, Legea lui Dumnezeu by the priest Vlad, Cartea de matematică by C. Popescu.

This explosion of demands regarding the autonomy of Bessarabia would also draw counter-reactions from Russian soldiers and officials, strongly supported by Russian newspapers and government. Moreover, the Ukrainian Council (the Parliament of Kiev – n.r.) also issued claims against Bessarabia, provoking strong protests from organizations in the region. At the Congress of the Peoples of Russia, held in Kiev on 8/21 and 14/27 September 1917, attended by Moldavian delegates, the members pronounced themselves for a wide autonomy within the Russian Federative and Democratic Republic. There was also “the right to personal national self-determination, that is, the constitution of the nation in an alliance of public law, which encompasses its members from all over the state.”

In the autumn of 1917, anarchy engulfed Russia and Bessarabia. The acts of violence and disorder were becoming a habit. Faced with these increasing threats, the Congress of  Moldavian Soldiers decides that Bessarabia adopts territorial and political autonomy, to constitute Moldavian military units, and more importantly, to immediately establish the Country Council to administer the activities of autonomous Bessarabia.

On November 21st/ December 4th 1917, the Country Council, which was composed of representatives of all nationalities, confessions and political orientations in Bessarabia, opened its first session and Ion Inculet was elected as the Council’s first president. On 2/15 December, the Council adopted a Declaration proclaiming the Moldavian Democratic Republic, which will be part of the Federative Republic of Russia, “as a shareholder of the same rights”. But at that moment there was no Russian Federative Republic. The way to independence and then to the Union of the Moldavian Democratic Republic with the motherland of Romania was open.