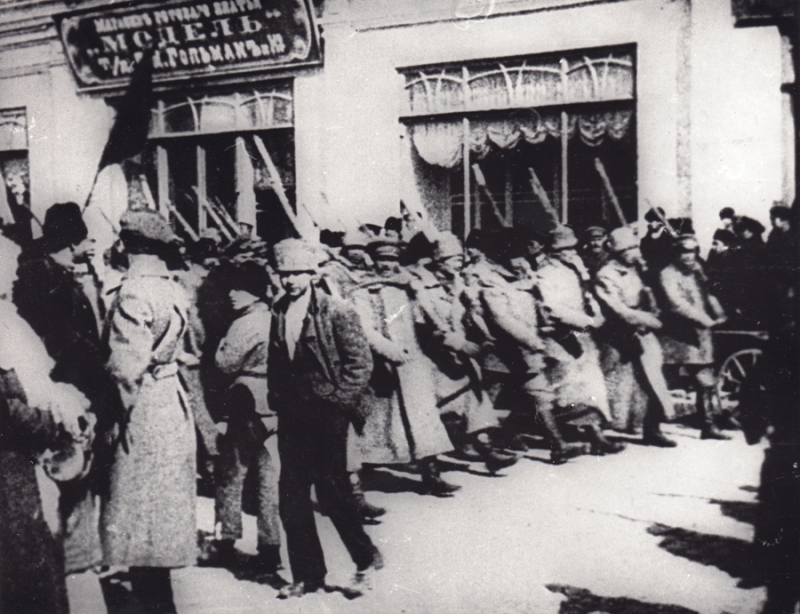 On the 6th of January (according to the new calendar 19th of January) 1918 a bloody conflict took place in Chișinău, the capital of the new Moldavian Democratic Republic. The Russian Bolsheviks in Frontotdel, a branch of the ROMCEROD Bolshevik organization in Odessa, attacked the train that was arriving from Kiev with a battalion of Transylvanian volunteers, made up of former war prisoners.

Romanians from Transylvania that fell to the Russians during the war, formed Romanian battalions and gradually joined the Romanian Army in Romania, crossing the Ukraine and Bessarabia by train. The last echelon, consisting of about 850 Romanian soldiers from Transylvania, arrived in Chișinău on the 6th of January, 1918.

In Chișinău, the Bolshevik agitators occupied the railway station, the telegraph and the post several days before. Fearful of the extent of the actions of the Bolsheviks, representatives of the Council of the Country (Sfatul Țării), a parliamentary body that was in charge of the Moldavian Democratic Republic, requested that the Romanian Government send military units to drive out the Bolsheviks, specifically requesting Transylvanian volunteers. In this context, the echelon coming from Kiev should have remained in Chișinău at the disposal of the Council of the Country.

The railway station in Chișinău – 1936

The communications were controlled by the Bolsheviks, who probably intercepted telegraph transmissions. When the train arrived at Chișinău railway station, the Bolsheviks were entrenched with machine guns all around it and prepared themselves for the ambush. The Romanian Transylvanian soldiers did not expect a confrontation, each soldier had only five bullets, the rest of the ammunition being kept in a separate wagon.

The Bolshevik Chief of the Chișinău Station stopped the train and asked the soldiers to hand over their weapons. The Romanian soldiers replied that they cannot hand over their weapons without orders from the Romanian consul or the French consul in Chișinău and asked that one of them to be brought there. Meanwhile, the Bolsheviks spread the rumour that the Romanians came to conquer the city of Chișinău and to undo all the liberties acquired through revolution, at the behest of the Council of the Country. Worried Moldavian soldiers gathered at the station, who asked the Romanians in the train what were they planning. They replied that they came from Kiev and wanted to go to Iași. But someone from the Moldavian side opened fire and that triggered the slaughter.

The Moldavian journalist from the newspaper Cuvînt Moldovenesc (Moldavian Word) describes the confrontation: “The Transylvanians did not want to fight, and our men, and especially the Moldavian fools, were shooting their rifles and machine guns, like they never did at the front against the Germans.” The Romanians surrendered “saying they did not want to shed brotherly blood“. Moldavians began to beat and harass the Transylvanians. “I am overcome with tears and cannot hold the pen, to write, how the deceived Moldavian fought with their own brothers!” writes the journalist from the Cuvânt Moldovenesc.

Romanian soldiers from Transylvania were beaten, stripped, mocked and displayed on the streets of Chișinău. The Bolsheviks spread the rumour that more Romanians are coming and that the city of Chișinău has to be defended. The weapons taken from the Romanian soldiers were divided among them and a weapon depot was looted.

In the revolutionary effusion of the moment, weapons were discharged into an airplane flying over the city, and in the night that followed they even used cannons to shoot in the air. Several people were killed and others injured in the city because of bullets and shrapnel.

On the evening of January 7, the Russians and Moldavians attacked the Străşeni food store near Chișinău. This deposit was constituted with the consent of the Chişinău government and was guarded by a few dozen Romanian soldiers. An anonymous telegram said that there were two echelons of Romanian soldiers in Strășeni that want to conquer the city of Chișinău. So, the Russians and Moldavians went there and took the Romanians who defended the food store prisoner.

On the same night, the Interallied Commission, made up of representatives of France, England and the United States, was robbed by the Bolsheviks. The Commission bought food from Bessarabia and had about 2 million rubles at its disposable. This money was stolen by a bunch of Bolshevik soldiers. Rumours said that 150,000 rubles were handed to the Moldavian soldiers who were with the Russian Bolsheviks.

Because of the anarchy in Chisinau, the editorial office of Cuvînt Moldovenesc newspaper claimed in its pages that “only a foreign army can save us“.